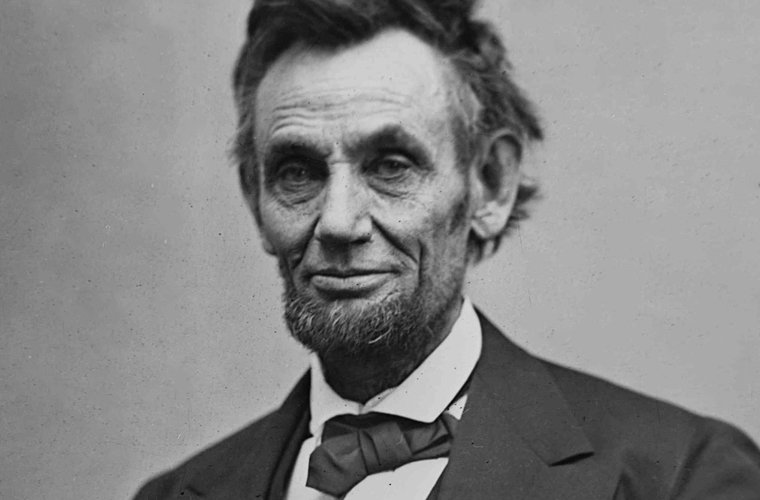 Abraham Lincoln, a self-taught lawyer, legislator and vocal opponent of slavery, was elected 16th president of the United States in November 1860, shortly before the outbreak of the Civil War. Lincoln proved to be a shrewd military strategist and a savvy leader: His Emancipation Proclamation paved the way for slavery’s abolition, while his Gettysburg Address stands as one of the most famous pieces of oratory in American history. In April 1865, with the Union on the brink of victory, Abraham Lincoln was assassinated by Confederate sympathizer John Wilkes Booth; his untimely death made him a martyr to the cause of liberty, and he is widely regarded as one of the greatest presidents in U.S. history.

Lincoln was born on February 12, 1809, in a one-room log cabin in Hardin County, Kentucky; his family moved to southern Indiana in 1816. Lincoln’s formal schooling was limited to three brief periods in local schools, as he had to work constantly to support his family.

In 1830, his family moved to Macon County in southern Illinois, and Lincoln got a job working on a river flatboat hauling freight down the Mississippi River to New Orleans. After settling in the town of New Salem, Illinois, where he worked as a shopkeeper and a postmaster, Lincoln became involved in local politics as a supporter of the Whig Party, winning election to the Illinois state legislature in 1834. Like his Whig heroes Henry Clay and Daniel Webster, Lincoln opposed the spread of slavery to the territories, and had a grand vision of the expanding United States, with a focus on commerce and cities rather than agriculture. Did you know? The war years were difficult for Abraham Lincoln and his family. After his young son Willie died of typhoid fever in 1862, the emotionally fragile Mary Lincoln, widely unpopular for her frivolity and spendthrift ways, held seances in the White House in the hopes of communicating with him, earning her even more derision.

Lincoln taught himself law, passing the bar examination in 1836. The following year, he moved to the newly named state capital of Springfield. For the next few years, he worked there as a lawyer, earning a reputation as “Honest Abe” and serving clients ranging from individual residents of small towns to national railroad lines. He met Mary Todd, a well-to-do Kentucky belle with many suitors (including Lincoln’s future political rival, Stephen Douglas), and they married in 1842.

Lincoln won election to the U.S. House of Representatives in 1846 and began serving his term the following year. As a congressman, Lincoln was unpopular with many Illinois voters for his strong stance against the U.S. war with Mexico. Promising not to seek reelection, he returned to Springfield in 1849. Events conspired to push him back into national politics, however: Douglas, a leading Democrat in Congress, had pushed through the passage of the Kansas-Nebraska Act (1854), which declared that the voters of each territory, rather than the federal government, had the right to decide whether the territory should be slave or free. On October 16, 1854, Lincoln went before a large crowd in Peoria to debate the merits of the Kansas-Nebraska Act with Douglas, denouncing slavery and its extension and calling the institution a violation of the most basic tenets of the Declaration of Independence.

With the Whig Party in ruins, Lincoln joined the new Republican Party–formed largely in opposition to slavery’s extension into the territories–in 1858 and ran for the Senate again that year (he had campaigned unsuccessfully for the seat in 1855 as well). In June, Lincoln delivered his now-famous “house divided” speech, in which he quoted from the Gospels to illustrate his belief that “this government cannot endure, permanently, half slave and half free.”

Lincoln then squared off against Douglas in a series of famous debates; though he lost the Senate election, Lincoln’s performance made his reputation nationally. His profile rose even higher in early 1860 after he delivered another rousing speech at New York City’s Cooper Union. That May, Republicans chose Lincoln as their candidate for president, passing over Senator William H. Seward of New York and other powerful contenders in favor of the rangy Illinois lawyer with only one undistinguished congressional term under his belt.

In the general election, Lincoln again faced Douglas, who represented the northern Democrats; southern Democrats had nominated John C. Breckenridge of Kentucky, while John Bell ran for the brand new Constitutional Union Party. With Breckenridge and Bell splitting the vote in the South, Lincoln won most of the North and carried the Electoral College to win the White House.

After years of sectional tensions, the election of an antislavery northerner as the 16th president of the United States drove many southerners over the brink. By the time Lincoln was inaugurated as 16th U.S. president in March 1861, seven southern states had seceded from the Union and formed the Confederate States of America.

After Lincoln ordered a fleet of Union ships to supply South Carolina’s Fort Sumter in April, the Confederates fired on both the fort and the Union fleet, beginning the Civil War. Hopes for a quick Union victory were dashed by defeat in the Battle of Bull Run (Manassas), and Lincoln called for 500,000 more troops as both sides prepared for a long conflict.

While the Confederate leader Jefferson Davis was a West Point graduate, Mexican War hero and former secretary of war, Lincoln had only a brief and undistinguished period of service in the Black Hawk War (1832) to his credit. He surprised many when he proved to be a capable wartime leader, learning quickly about strategy and tactics in the early years of the Civil War, and about choosing the ablest commanders.

General George McClellan, though beloved by his troops, continually frustrated Lincoln with his reluctance to advance, and when McClellan failed to pursue Robert E. Lee’s retreating Confederate Army in the aftermath of the Union victory at Antietam in September 1862, Lincoln removed him from command. Shortly after the Battle of Antietam (Sharpsburg), Lincoln issued a preliminary Emancipation Proclamation, which took effect on January 1, 1863, and freed all of the slaves in the rebellious states but left those in the border states (loyal to the Union) in bondage.  Though Lincoln once maintained that his “paramount object in this struggle is to save the Union, and is not either to save or destroy slavery,” he nonetheless came to regard emancipation as one of his greatest achievements, and would argue for the passage of a constitutional amendment outlawing slavery (eventually passed as the 13th Amendment after his death in 1865). Two important Union victories in July 1863–at Vicksburg, Mississippi, and Gettysburg, Pennsylvania–finally turned the tide of the war. General George Meade missed the opportunity to deliver a final blow against Lee’s army at Gettysburg, and Lincoln would turn by early 1864 to the victory at Vicksburg, Ulysses S. Grant, as supreme commander of the Union forces.

In November 1863, Lincoln delivered a brief speech (just 272 words) at the dedication ceremony for the new national cemetery at Gettysburg. Published widely, the Gettysburg Address eloquently expressed the war’s purpose, harking back to the Founding Fathers, the Declaration of Independence and the pursuit of human equality. It became the most famous speech of Lincoln’s presidency, and one of the most widely quoted speeches in history.

In 1864, Lincoln faced a tough reelection battle against the Democratic nominee, the former Union General George McClellan, but Union victories in battle (especially General William T. Sherman’s capture of Atlanta in September) swung many votes the president’s way. In his second inaugural address, delivered on March 4, 1865, Lincoln addressed the need to reconstruct the South and rebuild the Union: “With malice toward none; with charity for all.”

As Sherman marched triumphantly northward through the Carolinas, Lee surrendered to Grant at Appomattox Court House, Virginia, on April 9. Union victory was near, and Lincoln gave a speech on the White House lawn on April 11, urging his audience to welcome the southern states back into the fold. Tragically, Lincoln would not live to help carry out his vision of Reconstruction.

On the night of April 14, the actor and Confederate sympathizer John Wilkes Booth slipped into the president’s box at Ford’s Theatre in Washington, D.C., and shot him point-blank in the back of the head. Lincoln was carried to a boarding house across the street from the theater, but he never regained consciousness, and died in the early morning hours of April 15, 1865.