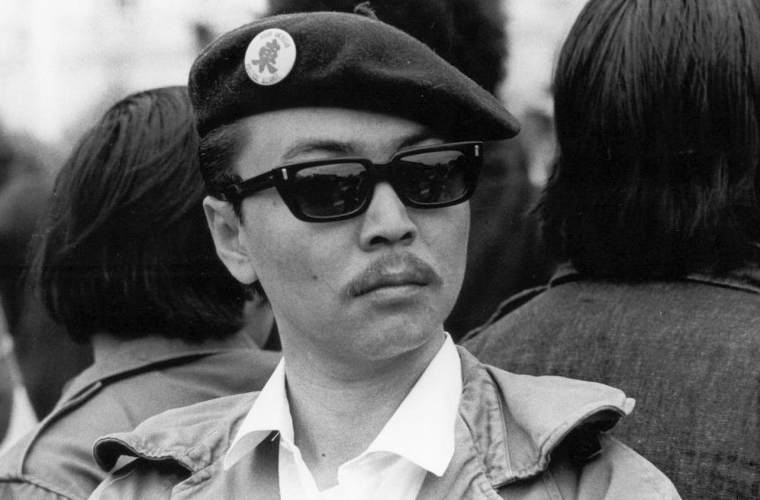 Bobby Seale. Eldridge Cleaver. Huey Newton. These names often come to mind when the Black Panther Party is the topic at hand. But in the 21st century, there’s been an effort to familiarize the public with a Panther who’s not so well known—Richard Aoki.

What distinguished Aoki from others in the black radical group? He was the only founding member of Asian descent. A third-generation Japanese-American from the San Francisco Bay area, Aoki not only played a fundamental role in the Panthers, but he also helped to establish an ethnic studies program at the University of California, Berkeley. The late Aoki’s biography reveals a man who counteracted the passive Asian stereotype and embraced radicalism to make long-lasting contributions to both the African- and Asian-American communities.

Richard Aoki was born Nov. 20, 1938, in San Leandro, Calif. His grandparents were Issei, first-generation Japanese Americans, and his parents were Nisei, second-generation Japanese Americans. He spent the first few years of his life in Berkeley, Calif., but his life underwent a major shift after World War II. When the Japanese attacked Pearl Harbor in December 1941, xenophobia against Japanese Americans reached unparalleled heights in the U.S. The Issei and Nisei were not only held responsible for the attack but also generally regarded as enemies of the state still loyal to Japan. As a result, President Franklin Roosevelt signed Executive Order 9066 in 1942. The order mandated that individuals of Japanese origin be rounded up and placed in internment camps. Aoki and his family were evacuated to a camp in Topaz, Utah, where they lived without indoor plumbing or heating.

“Our civil liberties were grossly violated,” Aoki told the “Apex Express” radio show of being relocated. “We were not criminals. We were not prisoners of war.”

During the politically tumultuous 1960s and ’70s, Aoki developed a militant ideology directly in response to being forced into an internment camp for no reason other than his racial ancestry.

After his discharge from the Topaz internment camp, Aoki settled with his father, brother and extended family in West Oakland, a diverse neighborhood that many African Americans called home. Growing up in that part of town, Aoki encountered blacks from the South who told him about lynchings and other acts of severe bigotry. He connected the treatment of blacks in the South to incidents of police brutality he’d witnessed in Oakland.

“I began putting two and two together and saw that people of color in this country really get unequal treatment and aren’t presented with many opportunities for gainful employment,” he said.

After high school, Aoki enlisted in the U.S. Army, where he served for eight years. As the war in Vietnam began to escalate, however, Aoki decided against a military career because he didn’t fully support the conflict and wanted no part in the killing of Vietnamese civilians. When he returned to Oakland following his honorable discharge from the army, Aoki enrolled in Merritt Community College, where he discussed civil rights and radicalism with future Panthers, Bobby Seale, and Huey Newton.

Aoki read the writings of Marx, Engels and Lenin, standard reading for radicals in the 1960s. But he wanted to be more than just well read. He also wanted to effect social change. That opportunity came along when Seale and Newton invited him to read over the Ten-Point Program that would form the foundation of the Black Panther Party. After the list was finalized, Newton and Seale asked Aoki to join the newly formed Black Panthers. Aoki accepted after Newton explained that being African-American wasn’t a prerequisite to joining the group. He recalled Newton saying:

“The struggle for freedom, justice, and equality transcends racial and ethnic barriers. As far as I’m concerned, you black.”

Aoki served as a field marshal in the group, putting his experience in the military to use to help members defend the community. Soon after Aoki became a Panther, he, Seale and Newton took to the streets of Oakland to pass out the Ten-Point Program. They asked residents to tell them their top community concern. Police brutality emerged as the No. 1 issue. Accordingly, the BPP launched what they called “shotgun patrols,” which entailed following the police as they patrolled the neighborhood and observing as they made arrests. “We had cameras and tape recorders to chronicle what was going on,” Aoki said.

But the BPP wasn’t the only group Aoki joined. After transferring from Merritt College to UC Berkeley in 1966, Aoki played a key role in the Asian American Political Alliance. The organization supported the Black Panthers and opposed the war in Vietnam.

In addition, the AAPA participated in local labor struggles on behalf of groups such as the Filipino Americans who worked in the agricultural fields. The group also reached out to other radical student groups on campus, including those that were Latino- and Native American-based such as MEChA (Movimiento Estudiantil Chicano de Aztlán), the Brown Berets and the Native American Student Association. The groups eventually united in the collective organization known as the Third World Council. The council wanted to create a Third World College, “an autonomous academic component of (UC Berkeley), whereby we could have classes that were relevant to our communities,” Aoki said, “whereby we could hire our own faculty, determine our own curriculum.”

In winter 1969, the council started the Third World Liberation Front Strike, which lasted an entire academic quarter—three months. Aoki estimated that 147 strikers were arrested. He himself spent time at the Berkeley City Jail for protesting. The strike ended when UC Berkeley agreed to create an ethnic studies department. Aoki, who had recently completed enough graduate courses in social work to obtain a master’s degree, was among the first to teach ethnic studies courses at Berkeley.

In 1971, Aoki returned to Merritt College, a part of the Peralta Community College district, to teach. For 25 years, he served as a counselor, instructor, and administrator in the Peralta district. His activity in the Black Panther Party waned as members were imprisoned, assassinated, forced into exile or expelled from the group. By the end of the 1970s, the party met its demise due to successful attempts by the FBI and other government agencies to neutralize revolutionary groups in the United States.

Although the Black Panther Party fell apart, Aoki remained politically active. When budget cuts at UC Berkeley placed the future of the ethnic studies department in jeopardy in 1999, Aoki returned to campus 30 years after he participated in the original strike to support student demonstrators who demanded that the program continue.

Inspired by his lifelong activism, two students named Ben Wang and Mike Cheng decided to make a documentary about the onetime Panther named “Aoki.” It debuted in 2009. Before his death on March 15 of that year, Aoki saw a rough cut of the film. Sadly, after suffering several health problems, including a stroke, a heart attack, and failing kidneys, Aoki ended his life in 2009. He was 70.

Following his tragic death, fellow Panther Bobby Seale remembered Aoki fondly. Seale told the Contra Costa Times, Aoki “was one consistent, principled person, who stood up and understood the international necessity for human and community unity in opposition to oppressors and exploiters.”