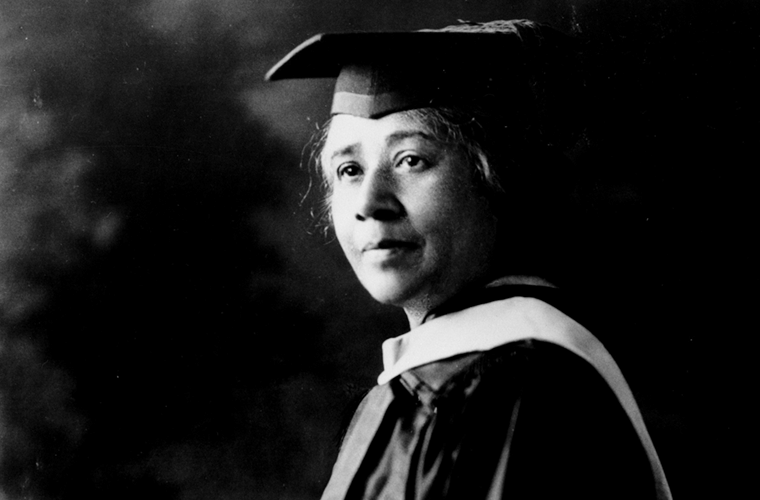 Cooper was the daughter of a slave woman and her white slaveholder (or his brother). In 1868 she enrolled in the newly established Saint Augustine’s Normal School and Collegiate Institute (now Saint Augustine’s University), a school for freed slaves. She quickly distinguished herself as an excellent student, and, in addition to her studies, she began teaching mathematics part-time at age 10. While enrolled at Saint Augustine’s, she had a feminist awakening when she realized that her male classmates were encouraged to study a more rigorous curriculum than were the female students. After that early realization, she spent the rest of her life advocating for the education of black women.

In 1877 Anna married her classmate George Cooper, who died two years later. After her husband’s death, Cooper enrolled in Oberlin College in Ohio, graduating in 1884 with a B.S. in mathematics and receiving a master’s degree in mathematics in 1888. In 1887 she became a faculty member at the M Street High School (established in 1870 as the Preparatory High School for Negro Youth) in Washington, D.C. There she taught mathematics, science, and, later, Latin.

During the 1890s Cooper became involved in the black women’s club movement. Women’s club members were generally educated middle-class women who believed that it was their duty to help less-fortunate African Americans. During that time Cooper became a popular public speaker. She addressed a wide variety of groups, including the National Conference of Colored Women in 1895 and the first Pan-African Conference in 1900.

In 1902 Cooper was named principal of the M Street High School. As principal, she enhanced the academic reputation of the school, and under her tenure, several M Street graduates were admitted to Ivy League schools. Cooper’s controversial emphasis on college preparatory courses irked critics (such as Booker T. Washington) who favored vocational education for blacks. Using trumped-up charges, the District of Columbia Board of Education refused to renew her contract for the 1905–06 school year. Undaunted, Cooper continued her career as an educator, teaching for four years at Lincoln University, a historically black college in Jefferson City, Missouri. In 1910 she was rehired as a teacher at M Street (renamed Dunbar High School after 1916), where she stayed until 1930.

In 1911 Cooper began studying part-time for a doctoral degree. In 1925, at age 67, she received a doctorate from the Sorbonne in Paris, having written her dissertation on slavery. Written in French, it was published in English as Slavery and the French Revolutionists, 1788–1805.

In addition to her scholarly activities, Cooper reared two foster children and five adoptive children on a teacher’s salary. From 1930 to 1941 she served as president of the Frelinghuysen University for working adults in Washington, D.C. She died in her sleep at age 105.