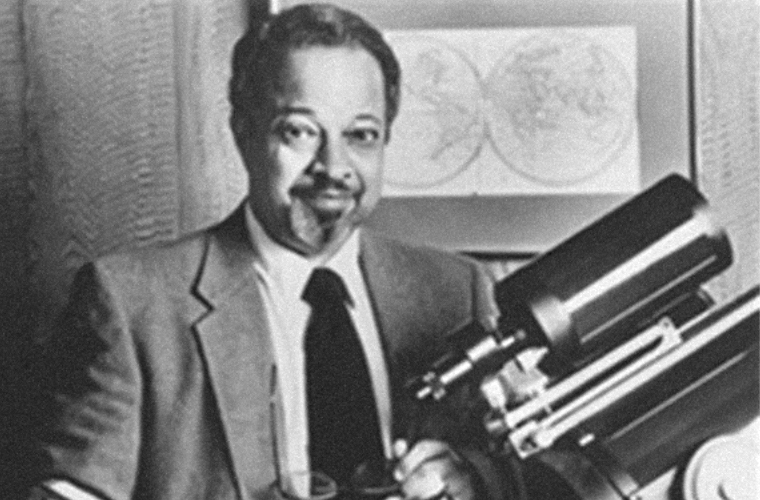 Arthur Bertram Cuthbert Walker, Jr. was an African American physicist and educator who helped develop solar telescopes used in 1987 to capture the first detailed images of the Sun’s outermost atmosphere. Walker, a professor of physics at Stanford University from 1974 until his death, is credited with helping Stanford produce more Black physicists with Ph.D.’s than any other university in the nation. His first graduate student was Sally Ride, the first American woman to fly into outer space. Walker was appointed by President Ronald Reagan to serve on the commission that investigated the causes of the 1986 space shuttle Challenger disaster.

Walker was born in Cleveland, Ohio on August 24, 1936, as the only child of Arthur and Hilda Walker. His father was a lawyer and his mother, Hilda, was a social worker and a Sunday school teacher. Hilda Walker’s father, who had immigrated to the United States from Barbados, founded The Advocate, an African-American newspaper, in Cleveland in the early 1900s.

From an early age, Walker developed an interest in science. He decided to pursue science after being admitted to Bronx High School of Science but faced many obstacles including attempts by a teacher to discourage him from being a scientist. With his mother’s support, and inspired by his other role model, Benjamin Banneker—the first African American man of science in the United States— he earned his bachelor degree in physics with honors from Case Western Institute of Technology in 1957. He went on to achieve Master’s (1958) and doctorate (1962) degrees at the University of Illinois. Art was elected to membership of Tau Beta Pi, Sigma Xi and Sigma Pi Phi fraternity for Black professionals.

Walker began his scientific career in the U.S. Air Force. While on active duty, he was instrumental in developing instrumentation for an experiment that involved rocket launch of a satellite to measure Van Allen belt radiation in the Earth’s magnetic field which affects satellite operation. This work ignited his interest in research carried out with space techniques.

In 1965, upon completing his military obligation, Walker joined the Space Physics Laboratory of The Aerospace Corporation, where for nine years his scientific research focused on radiation from the Sun called extreme ultraviolet light and soft X-rays, which affect the chemistry of Earth’s upper atmosphere, including the ozone layer. In the late 1970s, Walker became interested in what was then considered a risky and untested concept, called multilayer technology, for making special telescope mirrors that could reflect that radiation.

He worked with other scientists to develop the technology for use in space and was rewarded in 1987 when one of his rocket flights returned the first of a spectacular series of pictures of the Sun and its blazing corona as seen in those radiation bands. One of those pictures landed on the cover of the journal Science on Sept. 30, 1988.

The technology is now in wide use and is aboard two major NASA satellites, the Solar and Heliospheric Observatory and the Transition Region and Coronal Explorer.

In 1974, Walker went to Stanford as a professor in the department of Applied Physics and by 1991 he held a joint appointment in the Physics and Applied Physics departments. During his whole career at Stanford, he was an active member of the Center for Space Science and Astrophysics and the Astronomy Program. He chaired the latter program from 1977 until 1980.

His most lasting contribution to academic life at Stanford was his mentoring of graduate students. Walker was an outstanding advocate for opening astronomy to women and members of underrepresented groups. He was responsible for Stanford being the most prolific producers of African Americans with Ph.D.’s in Physics. His first graduate student, Sally Ride, went on to become the first American woman in space. Walker was also a leader of the African American community at Stanford and the longest-serving member of the advisory committee for the Afro-American studies program. He served as a successful role model for many of the young African-American assistant professors including Condoleeza Rice.

Throughout his career, Walker led or served on innumerable NASA, NSF, and NAS committees. The Walker committee was instrumental in the success of the GONG project. That same committee’s recommendations led to the unification of the solar observatories at Kitt Peak and Sacramento Peak into a National Solar Observatory.

President Ronald Reagan selected Walker, along with Neil Armstrong, Richard Feynman, and Sally Ride, to serve on the most important committee in the history of the US space program; the commission investigating the space shuttle Challenger explosion.

Walker died on April 29, 2001, at home on the Stanford campus, after battling cancer.