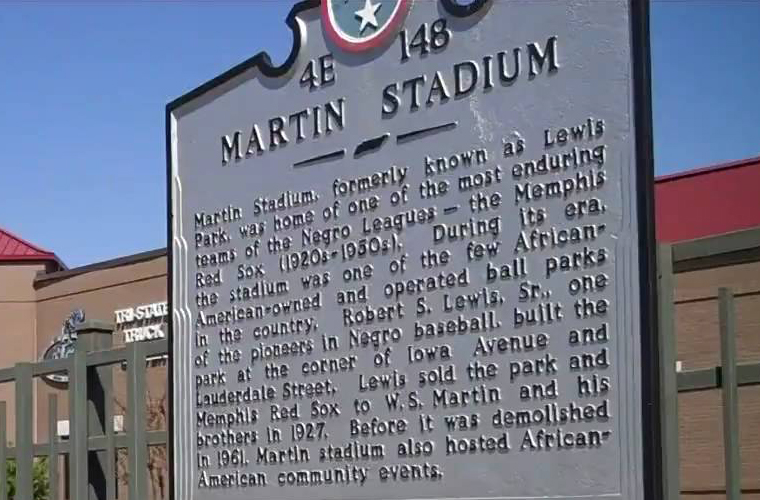 The Memphis Red Sox was a Negro League baseball team founded in 1923 by J. B. Martin and Dr. B. B. Martin, brothers in a prominent African-American family in Memphis. The Martin brothers were both dentists with prominent dental practices. J. B. Martin was a dentist, pharmacist, operated a funeral parlor, invested in real estate and Republican political leader. He built the Martin baseball park where he owned and operated the concession stands. He also owned a hotel nearby the baseball field in Memphis, as well as enterprises on Beale Street.

J.B. Martin’s family members were also quite enterprising. In addition to a dental practice, his brother Dr. B. B. Martin acted as the Red Sox business manager and served as an officer in the National Southern League. Dr. A. T. Martin worked as a general practitioner for fifty years and worked with the Red Sox for 25 years. Dr. William S. Martin, was superintendent of the Collins Chapel Hospital for 35 years, in addition to serving as an officer for the Red Sox and the Negro American League, as well as serving as president of the Negro Southern League. The four Martins, all Black doctors, were prominent in the Memphis community and within the Negro League franchises.

In 1920, the Martin brothers built Martin Stadium on what is now Crump Boulevard and Danny Thomas, making the Red Sox one of the few baseball clubs in the Negro League with their own ballpark. Most Negro League teams played in white team parks when the white teams were on the road. Not only did the Memphis Red Sox have a stadium, but J. B. Martin also owned a hotel near the park. The baseball park was built from scratch, but not without resistance from the White supremacy establishment in Memphis under what was called the “Crump Machine.” Edward Hull Crump governed Memphis for decades through manipulation of both the Black and White vote into a political machine that enabled him to control Memphis politics. When J. B. Martin, a Black Republican, denounced Crump in 1939, Crump responded with mounting pressure on Martin using the Memphis police, such as targeting Martin’s Beale Street businesses with raids. The Martin Stadium originally had a capacity of 3,000 but grew to nearly 7,000 seat capacity. It was demolished in 1961.
previous post