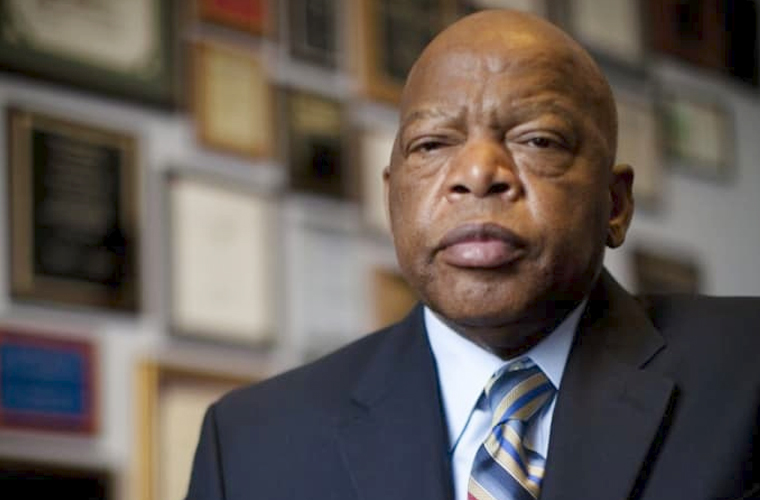 John Lewis was one of the “Big Six” leaders of the Civil Rights Movement in the 1960s, and he has continued to fight for people’s rights since joining Congress in 1987. Born in Alabama in 1940, John Lewis grew up in an era of racial segregation. Inspired by Martin Luther King Jr., he joined the burgeoning Civil Rights Movement. Lewis was a Freedom Rider, spoke at 1963’s March on Washington, and led the demonstration that became known as “Bloody Sunday.” He was elected to Congress in 1986 and received the Presidential Medal of Freedom in 2011.

John Robert Lewis was born outside of Troy, Alabama, on February 21, 1940. Lewis had a happy childhood—though he needed to work hard to assist his sharecropper parents—he chafed against the unfairness of segregation. He was particularly disappointed when the Supreme Court ruling in 1954’s Brown v. The Board of Education didn’t affect his school life. However, hearing Martin Luther King Jr.’s sermons and news of the 1955-56 Montgomery bus boycott inspired Lewis to act for the changes he wanted to see.

In 1957, John Lewis left Alabama to attend the American Baptist Theological Seminary in Nashville, Tennessee. There, he learned about nonviolent protest and helped to organize sit-ins at segregated lunch counters. He was arrested during these demonstrations, which upset his mother, but Lewis was committed to the Civil Rights Movement and went on to participate in the Freedom Rides of 1961.

Freedom Riders challenged the segregated facilities they encountered at interstate bus terminals in the South, which had been deemed illegal by the Supreme Court. It was dangerous work that resulted in arrests and beatings for many involved, including Lewis.

In 1963, Lewis became chairman of the Student Nonviolent Coordinating Committee. That same year, as one of the “Big Six” leaders of the Civil Rights Movement, he helped plan the March on Washington. Lewis—the youngest speaker at the event—had to alter his speech in order to please other organizers, but still delivered a powerful oration that declared, “We all recognize the fact that if any radical social, political and economic changes are to take place in our society, the people, the masses, must bring them about.”

After the March on Washington, in 1964, the Civil Rights Act became law. However, this did not make it easier for African Americans to vote in the South. To bring attention to this struggle, Lewis and Hosea Williams led a march from Selma to Montgomery, Alabama, on March 7, 1965. After crossing the Edmund Pettus Bridge, the marchers were attacked by state troopers. Lewis was severely beaten once more, this time suffering a fractured skull.

The violent attacks were recorded and disseminated throughout the country, and the images proved too powerful to ignore. “Bloody Sunday,” as the day was labeled, sped up the passage of 1965’s Voting Rights Act.

In December 2019, Lewis announced that he had been diagnosed with Stage 4 pancreatic cancer.
Although he was “clear-eyed about the prognosis,” Lewis said he felt encouraged that medical advancements had made this type of cancer treatable in many cases, adding that he intended to return to work as soon as possible.