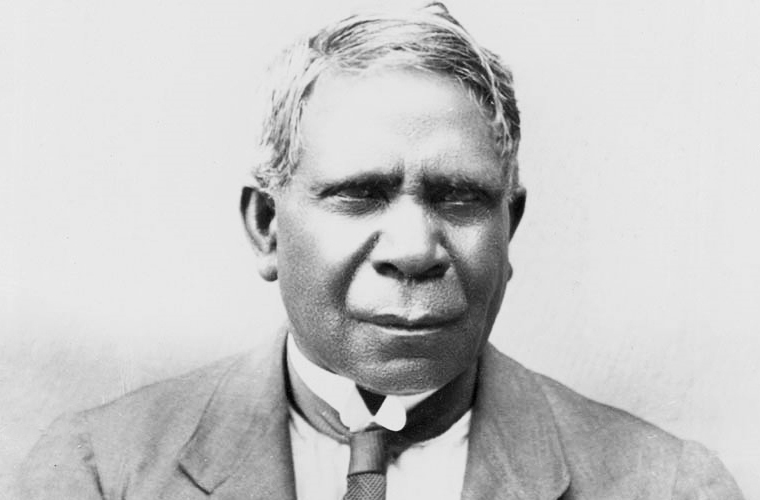 David Unaipon (1872-1967), preacher, author, and inventor was born on 28 September 1872 at the Point McLeay Mission, South Australia, fourth of nine children of James Ngunaitponi, evangelist, and his wife Nymbulda, both Yaraldi speakers from the lower Murray River region. James was the Congregational mission’s first Aboriginal convert. David attended the mission school from the age of 7. In 1885 he left to become a servant to C. B. Young who encouraged his interest in philosophy, science, and music. Back at Point McLeay from 1890, Unaipon read widely, played the organ and learned bootmaking at the mission. A non-smoker and teetotaller, he grew frustrated at the lack of work for educated Aborigines at mission settlements and in the late 1890s took a job as a storeman for an Adelaide bootmaker before returning to assist as book-keeper in the Point McLeay store. On 4 January 1902 at Point McLeay, he married a Tangani woman from the Coorong, Katherine Carter, née Sumner, a servant.

By 1909 Unaipon had developed and patented a modified handpiece for shearing. He was obsessed with discovering the secret of perpetual motion. In 1914 his repetition of predictions by others about the development of polarized light and helicopter flight were publicized, building his reputation as a ‘black genius’ and ‘Australia’s Leonardo’. Between 1909 and 1944 Unaipon made patent applications for nine other inventions, including a centrifugal motor, the multi-radial wheel, and a mechanical propulsion device, but the patents lapsed.

His fame, urbanity, fastidious manner of speech and Aboriginal identity confounded current stereotypes: Unaipon embodied the potential—in White terms—for Aboriginal advancement. His lectures for the Anglican Church stressed improvement: ‘Look at me and you will see what the Bible can do’, and his rhetorical skills were shared by other Point McLeay Aborigines.

In 1912 Unaipon led a deputation urging government control of Point McLeay Mission; next year he gave evidence to the royal commission into Aboriginal issues and became a subscription collector for the Aborigines’ Friends’ Association. For fifty years he traveled south-eastern Australia, combining this work with lectures and sermons in churches and cathedrals of different denominations. In addresses to schools and learned societies he spoke on Aboriginal legends and customs, and about his people’s future. He also demonstrated his inventions, but his public requests for financial support provoked the disapproval of the mission authorities. His wife (d.1928) stayed at home; their marriage was not happy.

From the early 1920s Unaipon studied Aboriginal mythology and compiled his versions of legends; he was influenced by the classics and by his researches into Egyptology at the South Australian Museum. The A.F.A. funded publication of Hungarrda (1927), Kinie Ger—The Native Cat (1928) and Native Legends (1929). Unaipon sold these and other booklets while employed by the A.F.A. His articles, beginning on 2 August 1924 in the Sydney Daily Telegraph, was written in a prose that showed the influence of Milton and Bunyan; they pre-dated the work of other Aboriginal writers by over thirty years. Unaipon published poetry in the 1930s and more legends in the 1950s and 1960s. Gathered before 1930, the legends are in his surviving manuscript in the Mitchell Library: they were commissioned and published by William Ramsay Smith, without acknowledgment, as Myths and Legends of the Australian Aboriginals (London, 1930). Unaipon also wrote ‘My Life Story’ and ‘Leaves of Memory’ (A.F.A. Annual Reports, 1951 and 1953).

In the 1920s and 1930s, he influenced government Aboriginal policy. Assisted by friends like Rev. John Sexton, Dr. Herbert Basedow, Sir George Murray, and Dr. Charles Duguid, Unaipon remained relatively free from the official restraints usually placed on Aborigines. In 1926 he appeared before another royal commission into the treatment of Aborigines. That year he also advocated a model Aboriginal state in an attempt to provide a separate territory for Aborigines in central and northern Australia; his involvement in the movement may have contributed to his arrest in November on vagrancy charges.

In 1928-29 he assisted the Bleakley inquiry into Aboriginal welfare. By then the best-known Aborigine in Australia, Unaipon was accepted as his people’s spokesman. His skill in manipulating members of the press—who invariably described him as a full-blood Aborigine—lent authenticity to his statements at a time when governments were concerned with the so-called ‘half-caste problem’. In 1934 he urged the Commonwealth to take over Aboriginal affairs and proposed that South Australia’s chief protector of Aborigines be replaced by an independent board. Educated Aboriginal men from Point McLeay and Point Pearce supported him, among them Mark Wilson; their view that the Aborigines’ transition to European society should be facilitated through education was supported by the A.F.A. and was later expressed in the Commonwealth’s assimilation policy. Unaipon’s preference for gradual change was highlighted by his disagreement with the New South Wales branch of the Australian Aborigines’ League over its National Day of Mourning on Australia Day, 1938.

In 1953 Unaipon received a Coronation medal. He continued to travel on foot in Adelaide and country centers, where he was often refused accommodation because of his race and was still preaching at 87. In his nineties, he worked on his inventions at Point McLeay, convinced that he was close to discovering the secret of perpetual motion. Survived by a son, he died at Tailem Bend Hospital on 7 February 1967 and was buried in Point McLeay cemetery.

Portraits of Unaipon by S. Wickes and Leslie Wilkie are in the South Australian Museum. In 1988 the national David Unaipon award for Aboriginal writers was instituted and an annual Unaipon lecture was established in Adelaide.