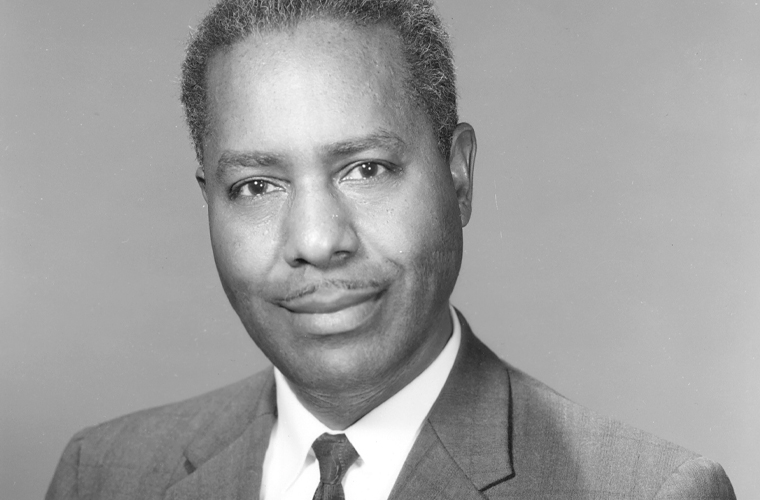 Walter Samuel McAfee, theoretical physicist, professor, and civil servant was born in Ore City, Texas to Susie and Luther McAfee on September 2, 1914.  His father, Luther McAfee, was a mechanic and carpenter, while his mother, Susie, was an educator.  McAfee earned a Bachelor’s degree in Mathematics in 1934 from Wiley College, a Historically Black College and University (HBCU) in Marshall, Texas. In 1937, he earned a Master’s of Science degree from Ohio State University.

With his Master’s degree, McAfee taught mathematics and biological sciences at a junior high school in Columbus, Ohio.  In 1941, He married Viola Winston, who was teaching French at the same junior high school.

In 1942, McAfee joined the United States Army Signal Corps Engineering Laboratories at Fort Monmouth in Belmar, New Jersey. His knowledge and mathematical skillset propelled him onto the Project Diana team.  Project Diana was a scientific collaboration in which engineers, including mathematical physicist McAfee, studied the Earth’s relationship to the moon via radar signal echoing.  He contributed the necessary theoretical calculations including a radar cross-section of the moon, radar coverage pattern, and the distance to the moon, all of which were crucial to the project’s success.

On January 10, 1946, the team successfully received the echoing signals between the Earth and the moon.  This success is in no small part due to McAfee’s work, yet he did not immediately receive recognition.  Months later, McAfee was recognized for his contribution to Project Diana.

After the success of the signal echoing project, he received the Rosenwald Fellowship to continue his doctoral degree at Cornell University in Ithaca, New York.  McAfee earned his Ph.D. in Physics in 1949, focusing on nuclear collisions with an advisor, Hans Bethe, renowned for his own study of nuclear physics.  Bethe would go onto win the Nobel Prize in Physics in 1967.

Upon completion of his doctoral studies, McAfee rejoined the United States Army Signal Corps Engineering Laboratories at Fort Monmouth as a scientist.  He contributed to scientific investigations involving nuclear weapons systems testing and satellite instrumentation. He was honored with the Secretary of the Army Research and Study Fellowship in 1956 by President Dwight D. Eisenhower, which gave him an opportunity to accept a post-doctoral appointment at Harvard University in Cambridge, Massachusetts.  It is during this time (1959-1960), that McAfee and his colleagues discovered that high altitude nuclear explosions can cause communications blackouts. He served as a scientist for 42 years at the Fort Monmouth Laboratory.

From 1978 until his retirement in 1985, Dr. McAfee served as a scientific advisor at the Signal Laboratories at Fort Monmouth in New Jersey.  In 1982, his alma mater, Wiley College, inducted Dr. McAfee into the Science Hall of Fame. After a lifetime of scientific development and contributions in service to the United States, Dr. Walter McAfee was posthumously honored when U.S. government officials created the McAfee Center at Fort Monmouth, a facility containing the Information and Intelligence Warfare Electronic Directorate.