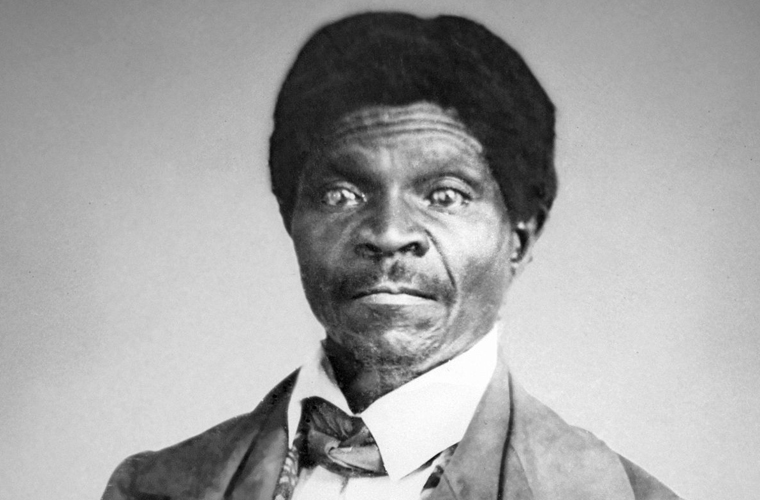 Dred Scott first went to trial to sue for his freedom in 1847. Ten years later, after a decade of appeals and court reversals, his case was finally brought before the United States Supreme Court. In what is perhaps the most infamous case in its history, the court decided that all people of African ancestry — slaves as well as those who were free — could never become citizens of the United States and therefore could not sue in federal court. The court also ruled that the federal government did not have the power to prohibit slavery in its territories. Scott, needless to say, remained a slave.

Born around 1800, Scott migrated westward with his master, Peter Blow. They traveled from Scott’s home state of Virginia to Alabama and then, in 1830, to St. Louis, Missouri. Two years later Peter Blow died; Scott was subsequently bought by army surgeon Dr. John Emerson, who later took Scott to the free state of Illinois. In the spring of 1836, after a stay of two and a half years, Emerson moved to a fort in the Wisconsin Territory, taking Scott along. While there, Scott met and married Harriet Robinson, a slave owned by a local justice of the peace. The ownership of Harriet was transferred to Emerson.

Scott’s extended stay in Illinois, a free state, gave him the legal standing to make a claim for freedom, as did his extended stay in Wisconsin, where slavery was also prohibited. But Scott never made the claim while living in the free lands — perhaps because he was unaware of his rights at the time, or perhaps because he was content with his master. After two years, the army transferred Emerson to the south: first to St Louis, then to Louisiana.

A little over a year later, a recently-married Emerson summoned his slave couple. Instead of staying in the free territory of Wisconsin, or going to the free state of Illinois, the two traveled over a thousand miles, apparently unaccompanied, down the Mississippi River to meet their master. Only after Emerson’s death in 1843, after Emerson’s widow hired Scott out as an army captain, did Scott seek freedom for himself and his wife. First, he offered to buy his freedom from Mrs. Emerson — then living in St. Louis — for $300. The offer was refused. Scott then sought freedom through the courts.

The nine justices of the Supreme Court of 1856 certainly had biases regarding slavery. Seven had been appointed by pro-slavery presidents from the South, and of these, five were from slave-holding families. Still, if the case had gone directly from the state supreme court to the federal supreme court, the federal court probably would have upheld the state’s ruling, citing a previously established decision that gave states the authority to determine the status of their inhabitants. But, in his attempt to bring his case to the federal courts, Scott had claimed that he and the case’s defendant (Mrs. Emerson’s brother, John Sanford, who lived in New York) were citizens from different states. The main issues for the Supreme Court, therefore, were whether it had jurisdiction to try the case and whether Scott was indeed a citizen.

The decision of the court was read in March of 1857. Chief Justice Roger B. Taney — a staunch supporter of slavery — wrote the “majority opinion” for the court. It stated that because Scott was black, he was not a citizen and therefore had no right to sue. The decision also declared the Missouri Compromise of 1820, legislation that restricted slavery in certain territories, unconstitutional.

While the decision was well-received by slaveholders in the South, many northerners were outraged. The decision greatly influenced the nomination of Abraham Lincoln to the Republican Party and his subsequent election, which in turn led to the South’s secession from the Union. Peter Blow’s sons, childhood friends of Scott, had helped pay Scott’s legal fees through the years. After the Supreme Court’s decision, the former master’s sons purchased Scott and his wife and set them free.

Reparations in the United States