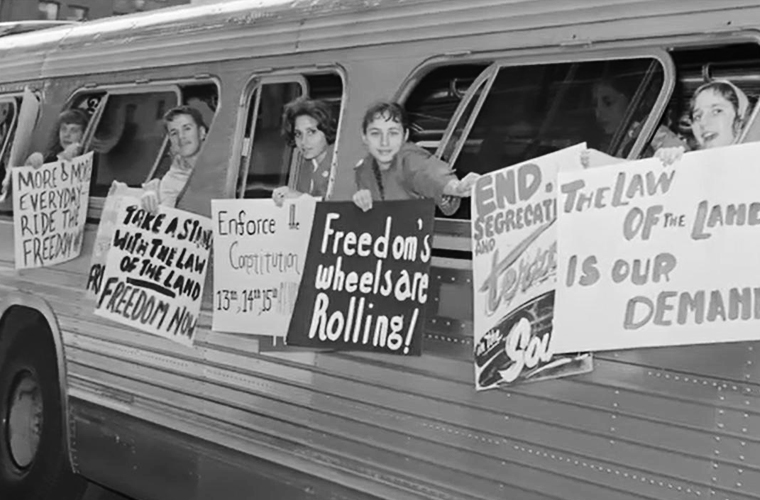 Freedom Rides, in U.S. history, was a series of political protests against segregation by blacks and whites who rode buses together through the American South in 1961.

In 1946 the U.S. Supreme Court banned segregation in interstate bus travel. A year later the Congress of Racial Equality (CORE) and the Fellowship of Reconciliation tested the ruling by staging the Journey of Reconciliation, on which an interracial group of activists rode together on a bus through the upper South, though fearful of journeying to the Deep South.

Following this example and responding to the Supreme Court’s Boynton v. Virginia decision of 1960, which extended the earlier ruling to include bus terminals, restrooms, and other facilities associated with interstate travel, a group of seven African Americans and six whites left Washington, D.C., on May 4, 1961, on a Freedom Ride in two buses bound for New Orleans. Convinced that segregationists in the South would violently protest this exercise of their constitutional right, the Freedom Riders hoped to provoke the federal government into enforcing the Boynton decision. When they stopped along the way, white riders used facilities designated for blacks and vice versa.

The Freedom Riders encountered violence in South Carolina, but in Alabama, the reaction was much more severe. On May 14, upon stopping outside Anniston to change a slashed tire, one bus was firebombed and the Freedom Riders were beaten. Arriving in Birmingham, the second bus was similarly attacked and the passengers beat. In both cases, law enforcement was suspiciously late in responding, and there were suspicions of collusion in that late response.

Although the original Riders were unable to find a bus line to carry them farther, the second group of 10, originating in Nashville and partly organized by the Student Nonviolent Coordinating Committee (SNCC), renewed the effort. Undeterred by being arrested in Birmingham and transported back to Tennessee, the new Freedom Riders returned to Birmingham and, at the behest of U.S. Attorney General Robert F. Kennedy, secured a bus and protection from the State Highway Patrol as they traveled to Montgomery, where, when local police failed to protect them, they were again beaten.

Thereafter National Guard support was provided when 27 Freedom Riders continued on to Jackson, Miss., only to be arrested and jailed. On May 29 Kennedy ordered the Interstate Commerce Commission to enforce even stricter guidelines banning segregation in interstate travel. Still, Freedom Riders continued to travel by public transportation in the South until that dictate took effect in September.