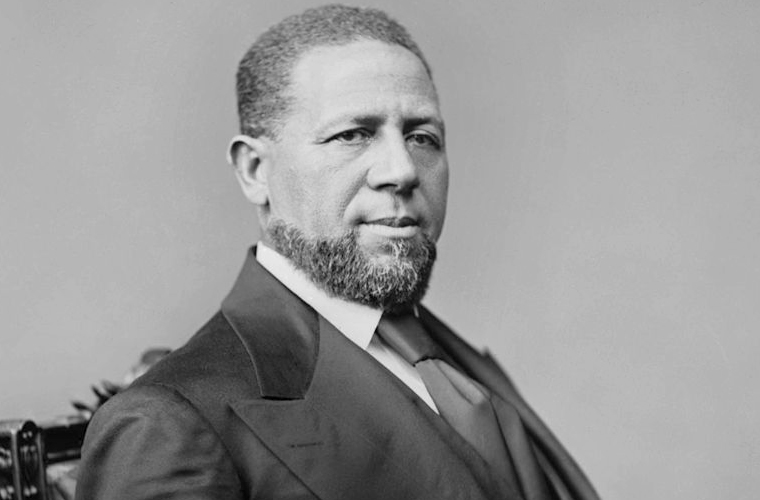 Hiram R. Revels is the first African American to serve in the United States Senate. Hiram R. Revels was born on September 27, 1827, in Fayetteville, North Carolina. Revels was a minister who, in 1870, became the first African-American United States senator, representing the state of Mississippi. He served for a year before leaving to become the president of a historically black college. Revels died on January 16, 1901, in Aberdeen, Mississippi.

Hiram Rhodes Revels was born in Fayetteville, North Carolina, on September 27, 1827. Despite being born in the South in a time of widespread slavery, Revels was a member of a free family. He and his brother both apprenticed as barbers. Revels’s brother subsequently owned his own barbershop.

Upon his brother’s death, Revels inherited and ran the shop before leaving North Carolina to study at seminaries in Indiana and Ohio. In 1845, he was ordained as a minister in the African Methodist Episcopal Church, working as an itinerant preacher.

Revels participated in the Civil War, organizing two black regiments for the Union Army. He also fought for the Union at the Battle of Vicksburg. After the war, he settled in Natchez, Mississippi, with his wife and daughters, and continued his career in the clergy. He quickly grew to be a respected member of the community, known for his keen intelligence and oratorical skills. Although he had no previous government experience, Revels garnered enough community support to win election to the position of alderman in 1868, during the first phase of Reconstruction. He then served briefly in the Mississippi State Senate.

In 1870, the state congress selected Revels to fill a vacant seat in the United States Senate. The debate surrounding his eligibility hinged on the 1857 Dred Scott decision, which precluded African-American citizenship. The decision was effectively reversed by the ratification of the 14th Amendment after the Civil War. Democrats argued that Revels did not meet the nine-year citizenship requirement to hold congressional office given his ineligibility for citizenship through the war years. Ultimately, Revels and his Republican allies prevailed by citing Revels’s mixed-race background, and Revels became the first African American to serve in the United States Senate. His appointment was particularly symbolic in that the seat he occupied had previously belonged to Jefferson Davis, the president of the Confederacy.

During his time in Washington, the press praised Revels for his well-crafted speeches and diplomatic approach to a tense congressional environment. His signature issue was civil rights, including the integration of schools and equal opportunities for black workers. Revels urged a moderate view on the restoration of Confederate citizenship. While the Radical Republicans in Congress called for harsh punishments to be meted out to Civil War rebels, Senator Revels took a milder view. He argued for the immediate restoration of citizenship to former Confederates, along with the secure enfranchisement, education and employment eligibility of African Americans.

Revels resigned from the Senate after a year to accept the presidency of Alcorn Agricultural and Mechanical College, located in Claiborne County, Mississippi. He also served as an instructor in philosophy. This position at the historically black Alcorn allowed Revels to directly participate in the intellectual enrichment of African Americans—a cause for which he had fought while serving in the Senate.

In addition to his administrative and teaching roles, Revels remained involved with the Methodist Church, continuing to preach publicly until the end of his life. Revels died on January 16, 1901, while attending a meeting of Methodist ministers in Aberdeen, Mississippi.