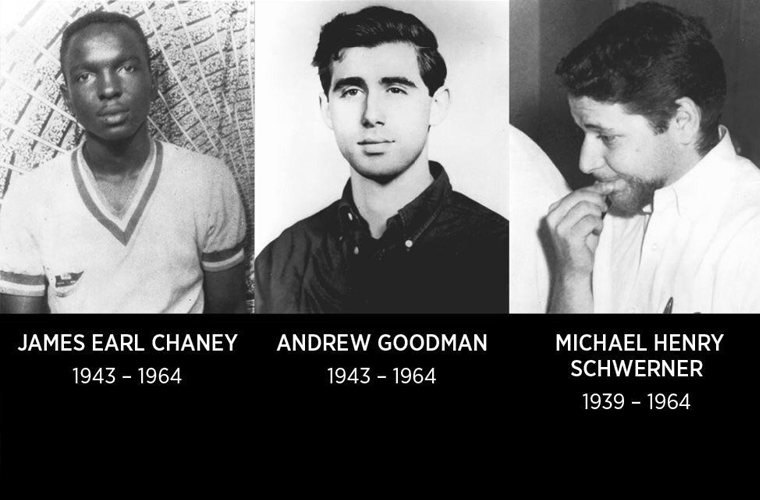 The remains of three civil rights workers whose disappearance on June 21 garnered national attention are found buried in an earthen dam near Philadelphia, Mississippi. Michael Schwerner and Andrew Goodman, both white New Yorkers, had traveled to heavily segregated Mississippi in 1964 to help organize civil rights efforts on behalf of the Congress of Racial Equality (CORE). The third man, James Chaney, was a local African American man who had joined CORE in 1963. The disappearance of the three young men led to a massive FBI investigation that was code-named MIBURN, for “Mississippi Burning.”

Michael Schwerner, who arrived in Mississippi as a CORE field worker in January 1964, aroused the animosity of white supremacists after he organized a successful black boycott of a variety store in the city of Meridian and led voter registration efforts for African Americans. In May, Sam Bowers, the Imperial Wizard of the White Knights of the Ku Klux Klan of Mississippi, sent word that the 24-year-old Schwerner, nicknamed “Goatee” and “Jew-Boy” by the KKK, was to be eliminated. On the evening of June 16, two dozen armed Klansmen descended on Mt. Zion Methodist Church, an African American church in Neshoba County that Schwerner had arranged to use as a “Freedom School.” Schwerner was not there at the time, but the Klansmen beat several African Americans present and then torched the church.

On January 20, Schwerner returned from a civil rights training session in Ohio with 21-year-old James Chaney and 20-year-old Andrew Goodman, a new recruit to CORE. The next day–June 21–the three went to investigate the burning of the church in Neshoba. While attempting to drive back to Meridian, they were stopped by Neshoba County Deputy Sheriff Cecil Price just inside the city limits of Philadelphia, the county seat. Price, a member of the KKK who had been looking out for Schwerner or other civil rights workers, threw them in the Neshoba County jail, allegedly under suspicion of church arson.

After seven hours in jail, during which the men were not allowed to make a phone call, Price released them on bail. After escorting them out of town, the deputy returned to Philadelphia to drop off an accompanying Philadelphia police officer. As soon as he was alone, he raced down the highway in pursuit of the three civil rights workers. He caught the men just inside county limits and loaded them into his car. Two other cars pulled up filled with Klansmen who had been alerted by Price of the capture of the CORE workers, and the three cars drove down an unmarked dirt road called Rock Cut Road. Schwerner, Goodman, and Chaney were shot to death and their bodies were buried in an earthen dam a few miles from the Mt. Zion Methodist Church.

The next day, the FBI began an investigation into the disappearance of the civil rights workers. On June 23, the case drew national headlines, and federal agents found the workers’ burned station wagon. Under pressure from Attorney General Robert F. Kennedy, the FBI escalated the investigation, which eventually involved more than 200 FBI agents and scores of federal troops who combed the woods and swamps looking for the bodies. The incident provided the final impetus needed for the 1964 Civil Rights Act to pass Congress on July 2, and eight days later FBI Director J. Edgar Hoover came to Mississippi to open a new Bureau office. Eventually, Delmar Dennis, a Klansman and one of the participants in the murders, was paid $30,000 and offered immunity from prosecution in exchange for information. On August 4, the remains of the three young men were found. The culprits were identified, but the state of Mississippi made no arrests.

Finally, on December 4, nineteen men, including Deputy Price, were indicted by the U.S. Justice Department for violating the civil rights of Schwerner, Goodman, and Chaney (charging the suspects with civil rights violations was the only way to give the federal government jurisdiction in the case). After nearly three years of legal wrangling, in which the U.S. Supreme Court ultimately defended the indictments, the men went on trial in Jackson, Mississippi. The trial was presided over by an ardent segregationist, U.S. District Judge William Cox, but under pressure from federal authorities and fearing impeachment, he took the case seriously. On October 27, 1967, an all-white jury found seven of the men guilty, including Price and KKK Imperial Wizard Bowers. Nine were acquitted, and the jury deadlocked on three others. The mixed verdict was hailed as a major civil rights victory, as no one in Mississippi had ever before been convicted for actions taken against a civil rights worker.

In December, Judge Cox sentenced the men to prison terms ranging from three to 10 years. After sentencing, he said, “They killed one nigger, one Jew, and a white man. I gave them what I thought they deserved.” None of the convicted men served more than six years behind bars.

On June 21, 2005, the forty-first anniversary of the three murders, Edgar Ray Killen, was found guilty of three counts of manslaughter. At eighty years of age and best known as an outspoken white supremacist and part-time Baptist minister, he was sentenced to 60 years in prison.