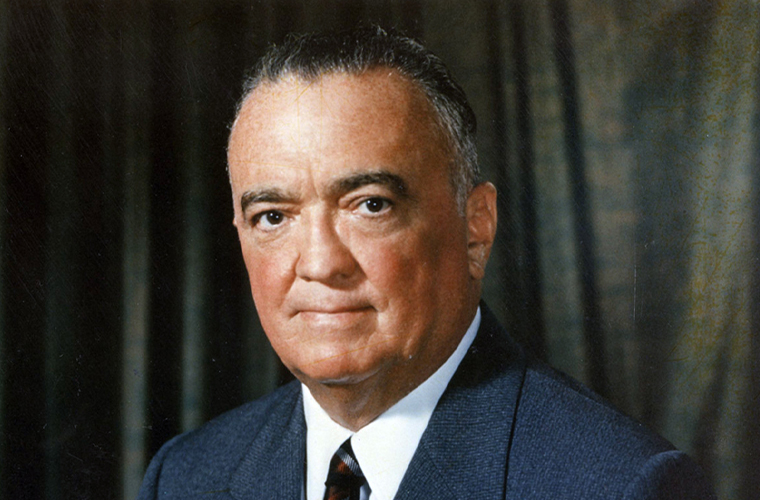 J. Edgar Hoover joined the Justice Department in 1917 and was named director of the Department’s Bureau of Investigation in 1924. When the Bureau reorganized as the Federal Bureau of Investigation in 1935, Hoover instituted strenuous agent-recruiting and advanced intelligence-gathering techniques. During his tenure, he confronted gangsters, Nazis, and Communists. Later, Hoover ordered illegal surveillance against suspected enemies of the state and political opponents. Despite receiving harsh criticism from the public, Hoover remained director of the FBI until his death on May 2, 1972.

John Edgar Hoover was born on January 1, 1895, to Dickerson Naylor Hoover and Annie Marie Scheitlin Hoover, two civil servants who worked for the U.S. Government. He grew up literally in the shadow of Washington, D.C., politics, in a neighborhood three blocks from Capitol Hill. Hoover was closest to his mother, who served as the family’s disciplinarian and moral guide. He lived with her until she died in 1938 when he was 43 years old.

Highly competitive, Hoover worked to overcome a stuttering problem by learning to talk fast. He joined the debate team in high school, where he achieved some notoriety. Wanting to enter into politics, he worked for the Library of Congress after high school and attended night classes at George Washington University Law School, earning his LLB and LLM degrees in 1917.

That same year, during which the United States entered World War I, Hoover obtained a draft-exempt position with the Justice Department. His efficiency and conservatism soon drew the attention of Attorney General A. Mitchell Palmer who appointed him to lead the General Intelligence Division (GID), created to gather information on radical groups. In 1919, the GID conducted raids without search warrants and arrested hundreds of individuals from suspected radical groups. Though known to history as the “Palmer Raids,” Hoover was the man behind the scenes, and hundreds of suspected subversives were deported.

Ultimately, Palmer suffered politically from the backlash and was forced to resign, while Hoover’s reputation remained stellar. In 1924, the 29-year-old Hoover was appointed the director of the Bureau of Investigation by President Calvin Coolidge. He had long sought the position and accepted the appointment on the conditions that the bureau be completely divorced from politics and that the director report only to the attorney general.

As the director, Hoover put into effect a number of institutional changes. He fired agents he considered political appointees or unqualified and ordered background checks, interviews, and physical tests for new agent applicants. He also obtained increased funding from Congress and instituted a technical laboratory that conducted scientific methods for gathering and analyzing evidence. In 1935, Congress established the Federal Bureau of Investigation and kept Hoover as its director.

During the 1930s, violent gangsters wreaked havoc on small towns across the Midwest. Local police were helpless against the gangs’ superior firepower and fast getaway cars. Syndicated criminal organizations were also amassing power in large cities. Hoover pressed for and received authority to have Bureau agents go after these groups under federal interstate laws. Such notorious gangsters as John Dillinger and George “Machine Gun” Kelly were hunted down and arrested or killed. The Bureau became an integral part of the national government’s law-enforcement effort and an icon in American pop culture, earning the federal agents the moniker “G-men.”

During and after World War II, the FBI became the nation’s bulwark against Nazi and Communist espionage. The Bureau performed domestic counterintelligence, counterespionage, and counter-sabotage investigations within the United States, and President Franklin D. Roosevelt ordered the FBI to run foreign intelligence in the Western Hemisphere. All this as the Bureau continued its investigations into bank robberies, kidnappings, and car theft.

Hunting ‘Subversives and Deviants’ and Death
During the Cold War, Hoover intensified his personal anti-Communist, anti-subversive stance and increased the FBI’s surveillance activities. Frustrated over limitations placed on the Justice Department’s investigative capabilities, he created the Counter Intelligence Program or COINTELPRO. The group conducted a series of covert, and oftentimes illegal, investigations designed to discredit or disrupt radical political organizations. Initially, Hoover ordered background checks on government employees to prevent foreign agents from infiltrating the government. Later, COINTELPRO went after any organization Hoover considered subversive, including the Black Panthers, the Socialist Workers Party, and the Ku Klux Klan.

Hoover also used COINTELPRO’s operations to conduct his own personal vendettas against political adversaries in the name of national security. Labeling Martin Luther King as “the most dangerous Negro in the future of this nation,” Hoover ordered around-the-clock surveillance on King, hoping to find evidence of Communist influence or sexual deviance. Using illegal wiretaps and warrantless searches, Hoover gathered a large file of what he considered damning evidence against King.

In 1971, COINTELPRO’s tactics were revealed to the public, showing that the agency’s methods included infiltration, burglaries, illegal wiretaps, planted evidence, and false rumors leaked about suspected groups and individuals. Despite the harsh criticism Hoover and the Bureau received, he remained its director until his death on May 2, 1972, at the age of 77.

Legacy
Hoover shaped the F.B.I in his own image of discipline and patriotism. He also directed the bureau into secret and illegal domestic surveillance spurred on by his conservative patriotism and paranoia. His nefarious tactics had been suspected for decades by government officials, but presidents from Truman to Nixon seemed unable to fire him due to his popularity and the potentially high political cost. In 1975, the Church Committee (named after its chairman, Senator Frank Church [D-Idaho]) conducted a full investigation of COINTELPRO’s operations and concluded that many of the agency’s tactics were illegal and, in many, cases unconstitutional.