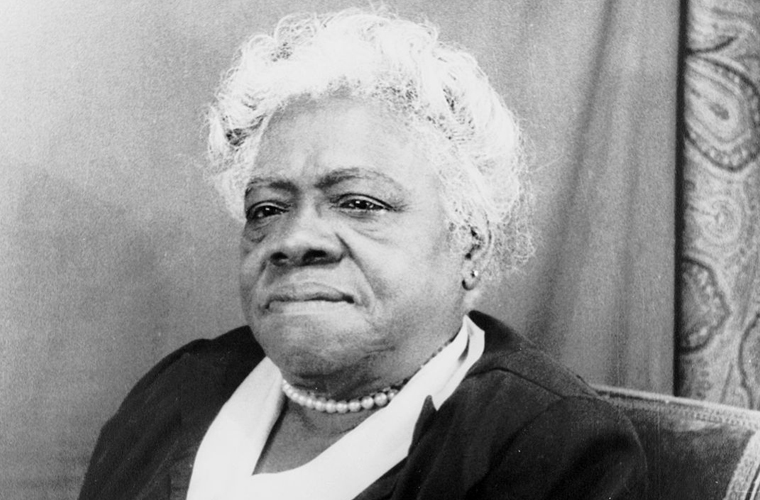 Mary McLeod Bethune was an educator and activist, serving as president of the National Association of Colored Women and founding the National Council of Negro Women. Born on July 10, 1875, in Mayesville, South Carolina, Mary McLeod Bethune was a child of former slaves. She graduated from the Scotia Seminary for Girls in 1893. Believing that education provided the key to racial advancement, Bethune founded the Daytona Normal and Industrial Institute in 1904, which later became Bethune-Cookman College.

She founded the National Council of Negro Women in 1935. Bethune died in 1955.

Born Mary Jane Mcleod on July 10, 1875, in Mayesville, South Carolina, Mary Mcleod Bethune was a leading educator and civil rights, activist. She grew up in poverty, as one of 17 children born to former slaves. Everyone in the family worked, and many toiled in the fields, picking cotton. Bethune became the one and only child in her family to go to school when a missionary opened a school nearby for African-American children. Traveling miles each way, she walked to school each day and did her best to share her newfound knowledge with her family.

Bethune later received a scholarship to the Scotia Seminary (now Barber-Scotia College), a school for girls in Concord, North Carolina. After graduating from the seminary in 1893, she went to the Dwight Moody’s Institute for Home and Foreign Missions (also known as Moody Bible Institute) in Chicago. Bethune completes her studies there two years later. Returning to the South, she began her career as a teacher.

For nearly a decade, Bethune worked as an educator. She married fellow teacher Albertus Bethune in 1898. The couple had one son together—Albert Mcleod Bethune—before ending their marriage in 1907. She believed that education provided the key to racial advancement. To that end, Bethune founded the Daytona Normal and Industrial Institute for Negro Girls in Daytona, Florida, in 1904. Starting out with only five students, she helped grow the school to more than 250 students over the next years.

Bethune served as the school’s president, and she remained its leader even after it was combined with the Cookman Institute for Men in 1923 (some sources say 1929). The merged institution became known as the Bethune-Cookman College. The college was one of the few places that African-American students could pursue a college degree. Bethune stayed with the college until 1942.

In addition to her work at the school, Bethune did much to contribute to American society at large. She served as the president of the Florida chapter of the National Association of Colored Women for many years. In 1924, Bethune became the organization’s national leader, beating out fellow reformer Ida B. Wells for the top post.

Bethune also became involved in government service, lending her expertise to several presidents. President Calvin Coolidge invited her to participate in a conference on child welfare. For President Herbert Hoover, she served on Commission on Home Building and Home Ownership and was appointed to a committee on child health. But her most significant role in public service came from President Franklin D. Roosevelt.

In 1935, Bethune became a special advisor to President Roosevelt on minority affairs. That same year, she also started up her own civil rights organization, the National Council of Negro Women. Bethune created this organization to represent numerous groups working on critical issues for African-American women. She received another appointment from President Roosevelt the following year. In 1936, she became the director of the Division of Negro Affairs of the National Youth Administration. One of her main concerns in this position was helping young people find job opportunities. In addition to her official role in the Roosevelt administration, Bethune became a trusted friend and adviser to both the president and his wife Eleanor Roosevelt.

One of the nation’s leading educators and activists, Mary Mcleod Bethune spent much of the rest of her life devoted to social causes after leaving Bethune-Cookman College in 1942. She took up residence at its new National Council of Negro Women headquarters in a Washington, D.C., townhouse in 1943 and lived there for several years. An early member of the National Association for the Advancement of Colored People, she helped represent the group at the 1945 conference on the founding of the United Nations along with W.E.B. DuBois. In the early 1950s, President Harry Truman appointed her to a committee on national defense and appointed her to serve as an official delegate to a presidential inauguration in Liberia.

“I leave you a thirst for education. Knowledge is the prime need of the hour.”

Eventually returning to Florida in her retirement, Bethune died on May 18, 1955, in Daytona, Florida. She is remembered for her work to advance the rights of both African Americans and women. Before her death, Bethune penned “My Last Will and Testament,” which served as a reflection on her own life and legacy in addition to addressing a few estate matters. Among her list of spiritual bequests, she wrote “I leave you a thirst for education. Knowledge is the prime need of the hour.” Bethune closed with ‘If I have a legacy to leave my people, it is my philosophy of living and serving.”

Since her passing, Bethune has been honored in many ways. In 1973, she was inducted into the National Women’s Hall of Fame. The U.S. Postal Service issued a stamp with her likeness in 1985. In 1994, the U.S. Park Service bought the former headquarters of the NCNW. The site is now known as the Mary Mcleod Bethune Council House National Historic Site.