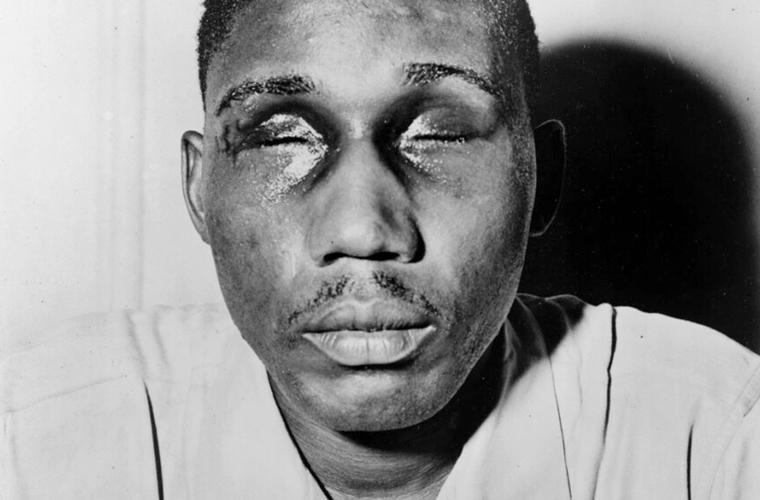 On Feb. 12, 1946, Sergeant Isaac Woodard, 26, had just returned to the U.S. from fighting abroad in World War II and was on a Greyhound bus en route to his home in Winnsboro, S.C., when he asked the bus driver if he could pull into a rest stop for a bathroom break. The driver refused, and the two got into a verbal argument. At the next stop in Batesburg, S.C., the driver ordered Woodard off the bus, and police officers, including Batesburg police chief Lynwood Shull, took Woodard into custody.

The exclusive clip above features a dramatization of Woodard describing how he was blinded in an April 23, 1946, sworn affidavit:

The policeman asked me, ‘was I discharged?’ and when I said, ‘yes,’ that’s when he started beating me with a billy near across the top of my head. After that, I grabbed his billy and wrung it out of his hand. Another policeman came up and threw his gun on me, told me to drop the billy, or he’d drop me, so I dropped the billy. He knocked me unconscious. He hollered, get up. When I started to get up, he started punching me in the eyes with the end of his billy.

Orson Welles, at the time a prominent radio announcer, publicized the incident, raising awareness among white Americans. The NAACP helped Woodard embark on a speaking tour to help people see the realities of police brutality up close. In August 1946, entertainers Billie Holiday and Woody Guthrie and boxer Joe Louis headlined a benefit concert at Harlem’s now-defunct Lewisohn Stadium to raise money for Woodard and his family. The event drew a crowd of 20,000 and raised $10,000 for Woodard and his family (about $132,835 in Feb. 2021).

“I spent three-and-a-half years in the service of my country and thought that I would be treated like a man when I returned to civilian life, but I was mistaken,” Woodard told the audience. “If the loss of my sight will make people in America get together to prevent what happened to me from ever happening again to any other person, I would be glad.”

In November 1946, in a trial over whether excessive or unnecessary force was used on Woodard, Batesburg police chief Shull claimed he only hit Woodard once. An all-white jury acquitted Shull after deliberating for 30 minutes.

The federal judge who presided over the case, Julius Waties Waring, however, didn’t think the outcome was fair. The case was a political awakening for him, according to Richard Gergel, a South Carolina federal judge who started researching Woodard’s case a decade ago and who brought attention to how it influenced future landmark civil rights cases in his 2019 book Unexampled Courage: The Blinding of Sgt. Isaac Woodard and the Awakening of President Harry S. Truman and Judge J. Waties Waring. Waring described the case as a “baptism by fire” that led him to issue opinions in favor of civil rights cases for years afterward.

For example, Waring’s dissenting opinion in Briggs v. Elliott (1952)—in which 20 Black parents in Clarendon County, S.C., sued for equal education for their children—argued school segregation was unconstitutional per the Fourteenth Amendment. The U.S. Supreme Court came to the same conclusion in Brown v. Board of Education, which cleared up five school segregation cases, including Briggs after Waring encouraged NAACP Legal Defense and Educational Fund lawyer and future U.S. Supreme Court Justice Thurgood Marshall to appeal the decision as a direct attack on segregation.

Woodard’s blinding was also a political awakening for future civil rights leaders. Student Nonviolent Coordinating Committee co-founder Julian Bond’s earliest memory of racial violence was seeing newspaper photographs of Woodard with bandages over his eyes at the age of six, photographs he would remember for “as long as I live,” per his 2021 posthumously-published collection of lectures, Time to Teach: A History of the Southern Civil Rights Movement.

Crucially, Woodard’s blinding spurred President Harry S. Truman to take action. NAACP leader Walter White recalled in his memoir that when he told Truman about Woodard’s blinding, Truman stood up and exclaimed, “My God! I had no idea it was as terrible as that! We’ve got to do something!” In Dec. 1946, a month after the acquittal of the Batesburg, S.C., police chief, Truman created a presidential commission on civil rights. In 1948, per its recommendation, he signed an executive order calling for the desegregation of the U.S. military and creating the President’s Committee on Equality of Treatment and Opportunity in the Armed Services.

“The Department of Justice had been somewhat timid in doing anything about the widespread denial of basic rights to African Americans in the South and across the country, but within two years of Woodard’s blinding, the Department of Justice would begin filing briefs in the United States Supreme Court in segregation cases, arguing that this Court should act against segregation,” says Mack.

As for Woodard, he wouldn’t receive disability benefits from the Army until 1962. To support his family, he bought properties in the Bronx, N.Y., and lived there until his death in 1992 at the age of 73. In 2019, a historic marker about Woodard went up in the city where he was blinded, now called Batesburg-Leesville.

Woodard stayed out of the spotlight, but the trauma of the incident always stayed with him. In a Sep. 16, 1982, interview with the public affairs TV program Like It Is, Woodard said he was frustrated that the police officer who blinded him kept his job. But he didn’t allow it to lose his faith in humanity. “Everybody ain’t bad,” as he put it.

When the host Gil Noble asked him what he wanted future generations to learn about America from what happened to him, Woodard replied, “People should learn how to live with one another and how to treat one another. Because after all, we all are human beings, regardless of color.”