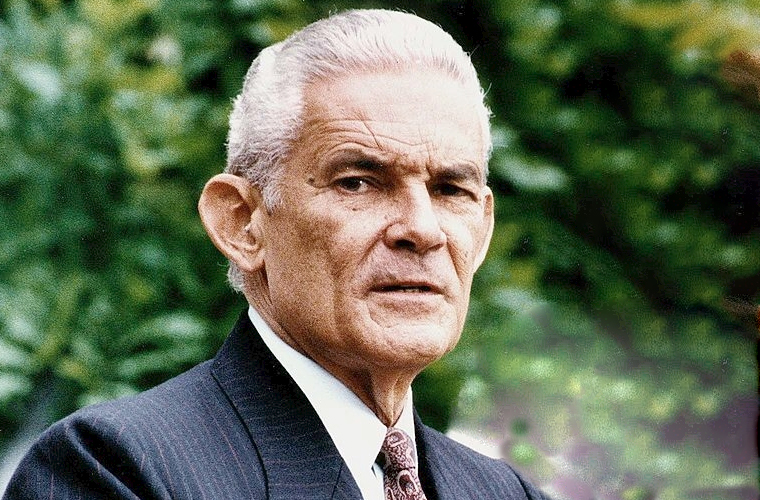 The life of this charismatic Jamaican leader began on December 10, 1924, in Kingston, Jamaica. Born to National Hero Norman Washington Manley and his wife, Edna Manley, Michael had one other sibling, his brother Douglas.

Young Manley started his education at the St. Andrew Kindergarten School in Kingston and later went on to the Munro and Dickenson College. In September 1943, Manley left Jamaica to study at McGill University in Canada but two weeks later volunteered to join the Royal Canadian Air Force. After his service in the Air Force Manley returned to Jamaica and had his first introduction to journalism as a sub-editor with the Public Opinion newspaper.

That same year Manley left Jamaica, this time to study at the London School of Economics in the United Kingdom. He completed his bachelor and postgraduate degrees while in England and continued his journalistic work with the British Broadcasting Corporation (BBC). In 1946 he married for the first time to Jacqueline Kamellardski. He later married four other times to Thelma Verity, Barbara Lewars, Beverley Anderson, and Glynn Ewart.

It was during his student years in London that Manley became actively involved in politics, having started as a student organizer and founding member of the West Indies Students’ Union. In 1952 Manley returned to Jamaica as Associate Editor of the Public Opinion, where he had worked before. It was at this time that he was formally introduced to the local political sphere when he was elected to the National Executive Council of the People’s National Party (PNP), which was founded by his father.

In 1952 the National Workers’ Union (NWU), an affiliate of the PNP, was formed and Mr. Manley began to handle union negotiations. He increasingly became involved in trade union and political activity while he continued his work with the Public Opinion, until August 1953 when he accepted the post of Sugar Supervisor for the NWU. In two years he was made Island Supervisor and First Vice-President of the Union. Among the most often retold events in Michael Manley’s career, as a trade unionist was the 97-day strike, which he led at the Jamaica Broadcasting Corporation in 1964. It was during that strike that the workers dubbed him “Joshua”, a nickname that many PNP supporters still fondly use.

In 1970, Michael Manley took over the leadership of the PNP when he was elected to that position, following his father’s resignation. In 1972 after reorganizing the PNP and embarking on an election campaign marked by the slogan, “Better Must Come”, Manley led the PNP to victory at the polls. He was sworn in as Prime Minister on March 2, 1972. In the middle of his first four-year term, Mr. Manley’s Government declared that its ideological platform would become Democratic Socialism. This political shift led to the introduction of such social and economic reforms as the Minimum Wage Law, compulsory recognition of labor unions, maternity leave for women, the Children’s Act (Bastard Act) which granted equal status to children born to unwed as well as married parents. Free secondary education was also introduced. The Jamaica Movement for the Advancement of Literacy (JAMAL) and the Basic School Development Programmes were other initiatives of the new socialist Government.

Manley’s Government also introduced the Bauxite Levy in 1974 that exacted 7.5 percent of the earnings from bauxite sales. In addition, Government moved to acquire majority ownership of the local assets in the alumina industry.

On December 20, 1976, the Manley-led PNP again won a General Election, this time by a landslide 47 to 13 seat victory over the JLP. But by the end of the second term in office, the Manley administration’s Democratic Socialist ideology led to the alienation of the western giant, the United States and to the disenchantment of the electorate. The result was an equally telling landslide victory by the JLP in 1980 that put Michael Manley again in the seat of the Parliament Leader of the Opposition. Between 1980 and 1989 the JLP governed the country. However, it was only between 1980 and 1983 that the PNP was officially the Opposition Party. This came about as a result of the so-called “Snap Elections” of December 1983 which the Manley-led PNP refused to contest on the grounds that the Government had promised electoral reform before an election was called. Between 1983 and 1989 there was no constitutional opposition. However, Mr. Manley was viewed as the de facto Opposition Leader.

In 1985 the nation was made aware of the varied health problems which were to eventually lead to Mr. Manley’s retirement from active politics in 1992. He underwent surgery for diverticulitis, a benign thyroid growth, colon removal, prostate gland cancer and blood clots in his leg, along with bouts of influenza and pneumonia. His recurring ill health put questions in the mind of the public about Mr. Manley’s future as President of the PNP. However, his influence remained strong and starting with the Local Government election of 1986 in which the PNP won in 12 of the 13 Councils, the Party continued to gain the support of the electorate.

The 1989 General Elections saw the return of the PNP to Government and Manley as Prime Minister. Prior to his re-election, Mr. Manley publicly declared that he had made errors during his previous administration and he took a more moderate ideological line. The new Manley administration was decidedly capitalist in its outlook as reflected in the Prime Minister’s speech to the 52nd Annual Conference of the PNP in 1990. He said the task of Government was to release the “spirit of initiative” and the “sense of energy and entrepreneurship” in every Jamaican. This ushered the move to the liberalization of the economy. After three years in office, Mr. Manley resigned as leader of the PNP and Prime Minister of Jamaica.

During the period 1973 to 1988, Mr. Manley wrote six books. With the exception of A History of West Indian Cricket, published in 1988, all his books were focused on his political interest and involvement over the years. Mr. Manley was recognized as an avid sports enthusiast, whose special interests were cricket and boxing. He was also the person who popularised the practice of jogging around the Mona Reservoir, where for many years he exercised each day.