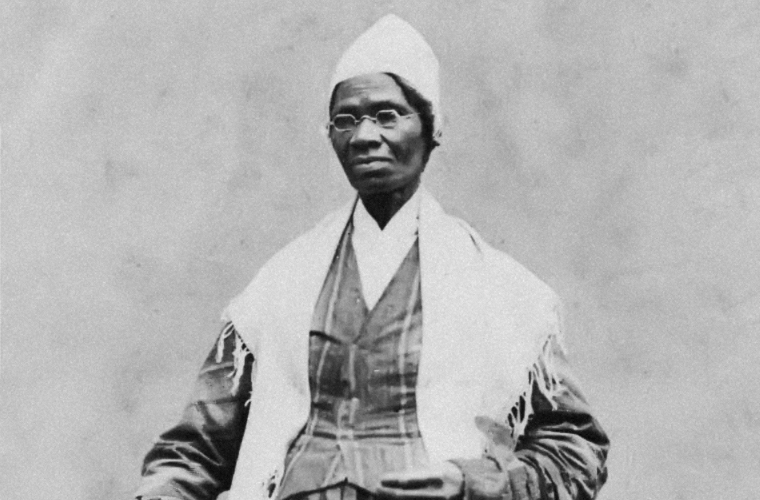 Sojourner Truth was an African American evangelist, abolitionist, women’s rights activist, and author who was born into slavery before escaping to freedom in 1826. After gaining her freedom, Truth preached about abolitionism and equal rights for all. She became known for a speech with the famous refrain, “Ain’t I a Woman?” that she was said to have delivered at a women’s convention in Ohio in 1851, although accounts of that speech (and whether Truth ever used that refrain) have since been challenged by historians. Truth continued her crusade throughout her adult life, earning an audience with President Abraham Lincoln and becoming one of the world’s best-known human rights crusaders.

Sojourner Truth was born Isabella Baumfree in 1797 to enslaved parents James and Elizabeth Baumfree, in Ulster County, New York. Around age nine, she was sold at an auction to John Neely for $100, along with a flock of sheep. Neely was a cruel and violent master who beat the young girl regularly. She was sold two more times by age 13 and ultimately ended up at the West Park, New York, home of John Dumont and his second wife Elizabeth.

Around age 18, Isabella fell in love with an enslaved man named Robert from a nearby farm. But the couple was not allowed to marry since they had separate owners. Instead, Isabella was forced to marry another enslaved man owned by Dumont named Thomas. She eventually bore five children: James, Diana, Peter, Elizabeth, and Sophia.

At the turn of the 19th century, New York started legislating emancipation, but it would take over two decades for liberation to come for all enslaved people in the state. In the meantime, Dumont promised Isabella he’d grant her freedom on July 4, 1826, “if she would do well and be faithful.” When the date arrived, however, he had a change of heart and refused to let her go. Incensed, Isabella completed what she felt was her obligation to Dumont and then escaped his clutches, infant daughter in tow. She later said, “I did not run off, for I thought that wicked, but I walked off, believing that to be all right.”

In what must have been a gut-wrenching choice, she left her other children behind because they were still legally bound to Dumont. Isabella made her way to New Paltz, New York, where she and her daughter were taken in as free people by Isaac and Maria Van Wagenen. When Dumont came to reclaim his “property,” Van Wagenen offered to buy Isabella’s services from him for $20 until the New York Anti-Slavery Law emancipating all enslaved people took effect in 1827; Dumont agreed.

Sojourner Truth, First Black Woman to Sue White Man–And Win
After the New York Anti-Slavery Law was passed, Dumont illegally sold Isabella’s five-year-old son Peter. With the help of the Van Wagenen’s, she filed a lawsuit to get him back. Months later, Isabella won her case and regained custody of her son. She was the first Black woman to sue a white man in a United States court and prevail.

Sojourner Truth’s Spiritual Calling
The Van Wagenen’s had a profound impact on Isabella’s spirituality and she became a fervent Christian. In 1829, she moved to New York City with Peter to work as a housekeeper for evangelist preacher Elijah Pierson. She left Pierson three years later to work for another preacher, Robert Matthews. When Elijah Pierson died, Isabella and Matthews were accused of poisoning him and of theft but were eventually acquitted.

Living among people of faith only emboldened Isabella’s devoutness to Christianity and her desire to preach and win converts. In 1843, with what she believed was her religious obligation to go forth and speak the truth, she changed her name to Sojourner Truth and embarked on a journey to preach the gospel and speak out against slavery and oppression.

‘Ain’t I A Woman?’ Speech and Controversy
In 1844, Truth joined a Massachusetts abolitionist organization called the Northampton Association of Education and Industry, where she met leading abolitionists such as Frederick Douglass and effectively launched her career as an equal rights activist.

Among Truth’s contributions to the abolitionist movement was the speech she delivered at the Ohio Women’s Rights Convention in 1851, where she spoke powerfully about equal rights for Black women. Twelve years later, Frances Gage, a white abolitionist, and president of the Convention published an account of Truth’s words in the National Anti-Slavery Standard. In her account, Gage wrote that Truth used the rhetorical question, “Aren’t I a Woman?” to point out the discrimination Truth experienced as a Black woman.

Various details in Gage’s account, however, including that Truth said she had 13 children (she had five) and that she spoke in dialect have since cast doubt on its accuracy. Contemporaneous reports of Truth’s speech did not include this slogan and quoted Truth in standard English. In later years, this slogan was further distorted to “Ain’t I a Woman?”, reflecting the false belief that as a formerly enslaved woman, Truth would have had a Southern accent. Truth was, in fact, a proud New Yorker.

There is little doubt, nonetheless, that Truth’s speech—and many others she gave throughout her adult life—moved audiences. Another account of Truth’s 1851 speech, published in a newspaper about a month later, reported her saying, “I have plowed and reaped and husked and chopped and mowed, and can any man do more than that? Truth’s powerful rhetoric won her audiences with leading women’s rights activists of her day, including Elizabeth Cady Stanton and Susan B. Anthony.

Sojourner Truth During the Civil War
Like another famous escaped enslaved woman, Harriet Tubman, Truth helped recruit Black soldiers during the Civil War. She worked in Washington, D.C., for the National Freedman’s Relief Association and rallied people to donate food, clothes, and other supplies to Black refugees.

Her activism for the abolitionist movement gained the attention of President Abraham Lincoln, who invited her to the White House in October 1864 and showed her a Bible given to him by African Americans in Baltimore. While Truth was in Washington, she put her courage and disdain for segregation on display by riding on whites-only streetcars. When the Civil War ended, she tried exhaustively to find jobs for freed Black Americans weighed down with poverty. Later, she unsuccessfully petitioned the government to resettle formerly enslaved people on government land in the West.

Sojourner Truth Quotes
“If the first woman God ever made was strong enough to turn the world upside down all alone, these women together ought to be able to turn it back, and get it right side up again! And now they are asking to do it, the men better let them.”

And what is that religion that sanctions, even by its silence, all that is embraced in the ‘Peculiar Institution? If there can be anything more diametrically opposed to the religion of Jesus, than the working of this soul-killing system – which is as truly sanctioned by the religion of America as are her ministers and churches—we wish to be shown where it can be found.”

“Now, if you want me to get out of the world, you had better get the women votin’ soon. I shan’t go till I can do that.”

Sojourner Truth’s Later Years
In 1867, Truth moved to Battle Creek, Michigan, where some of her daughters lived. She continued to speak out against discrimination and in favor of woman’s suffrage. She was especially concerned that some civil rights leaders such as Frederick Douglass felt equal rights for Black men took precedence over those of Black women.

Truth died at home on November 26, 1883. Records show she was age 86, yet her memorial tombstone states she was 105. Engraved on her tombstone are the words, “Is God Dead?” a question she once asked a despondent Frederick Douglass to remind him to have faith.

Truth left behind a legacy of courage, faith, and fighting for what’s right and honorable, but she also left a legacy of words and songs including her autobiography, The Narrative of Sojourner Truth, which she dictated in 1850 to Olive Gilbert since she never learned to read or write.

Perhaps Truth’s life of Christianity and fighting for equality is best summed up by her own words in 1863: “Children, who made your skin white? Was it not God? Who made mine Black? Was it not the same God? Am I to blame, therefore, because my skin is Black? …. Does not God love colored children as well as white children? And did not the same Savior die to save the one as well as the other?”