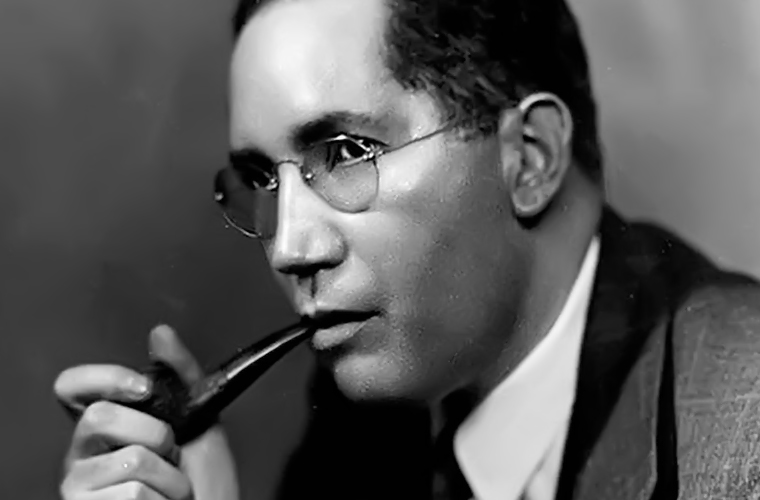 Sterling Allen Brown (May 1, 1901 – January 13, 1989) was a black professor, folklorist, poet, and literary critic. He chiefly studied the black culture in the Southern United States and was a full professor at Howard University for most of his career. He was a visiting professor at several other notable institutions, including Vassar College, New York University (NYU), Atlanta University, and Yale University.

Sterling A. Brown was born on the campus of Howard University in Washington D.C., where his father, Sterling N. Brown, a former slave, was a prominent minister and professor at Howard University Divinity School.

His mother Grace Adelaide Brown, who had been the valedictorian of her class at Fisk University, taught in D.C. public schools for more than 50 years. Both his parents grew up in Tennessee and often shared stories with Brown, their only child, who heard his father’s stories about famous leaders such as Frederick Douglass and Booker T. Washington. Brown’s early childhood was spent on a farm on Whiskey Bottom Road in Howard County, Maryland. He was educated at Waterford Oaks Elementary and Dunbar High School, where he graduated as the top student.

He received a scholarship to attend Williams College in Massachusetts. Graduating from Williams Phi Beta Kappa in 1922, he continued his studies at Harvard University, receiving an MA a year later. That same year 1923, he was hired as an English lecturer at Virginia Theological Seminary and College in Lynchburg, Virginia, a position he would hold for the next three years. He never pursued a doctorate degree, but several colleges he attended gave him honorary doctorates.

Brown won “the Graves Prize for his essay ‘The Comic Spirit in Shakespeare and Moliere'” in his time at Williams College. Marriage and family Brown married Daisy Turnbull in 1927 and they went on to adopt a son together. Daisy was an occasional muse for Brown: his poems “Long Track Blues” and “Against That Day” were inspired by her. Married for over 50 years, the second poem in Alfred Edward Housman’s A Shropshire Lad was meaningful to the couple. Brown read the poem to Daisy on their wedding day and she read it to him fifty years later on their anniversary.

Academic career Brown began his teaching career with positions at several universities, including Lincoln University and Fisk University, before returning to Howard in 1929. He was a professor there for 40 years. Brown’s poetry used the south for its setting and showed the slave experiences of the African American people. Brown often imitated southern African-American speech, using “variant spellings and apostrophes to mark dropped consonants”. He taught and wrote about African-American literature and folklore. He was a pioneer in the appreciation of this genre.

He had an “active, imaginative mind” when writing and “a natural gift for dialogue, description, and narration”. Brown was known for introducing his students to concepts then popular in jazz, which along with blues, spirituals, and other forms of black music formed an integral component of his poetry. In addition to his career at Howard University, Brown served as a visiting professor at Vassar College, New York University (NYU), Atlanta University, and Yale University. Some of his notable students include Toni Morrison, Kwame Ture (Stokely Carmichael), Kwame Nkrumah, Thomas Sowell, Ossie Davis, and Amiri Baraka (aka LeRoi Jones). In 1969 Brown retired from his faculty position at Howard and turned full-time to poetry. Literary career In 1932 Brown published his first book of poetry Southern Road.

It was a collection of poems with rural themes and treated the simple lives of poor, black, country folk with extra poignancy and dignity. It also used authentic dialect and structures. Despite the success of this book, he struggled to find a publisher for the follow-up, No Hiding Place. Sterling Brown was most known for his authentic southern black dialect.

His poetic work was influenced in content, form, and cadence by African-American music, including work songs, blues, and jazz. Like that Jean Toomer, Zora Neale Hurston, Langston Hughes, and other black writers of the period, his work often dealt with race and class in the United States. He was deeply interested in a folk-based culture, which he considered most authentic. Brown is considered part of the Harlem Renaissance artistic tradition, although he spent the majority of his life in the Brookland neighborhood of Northeast Washington, D.C.