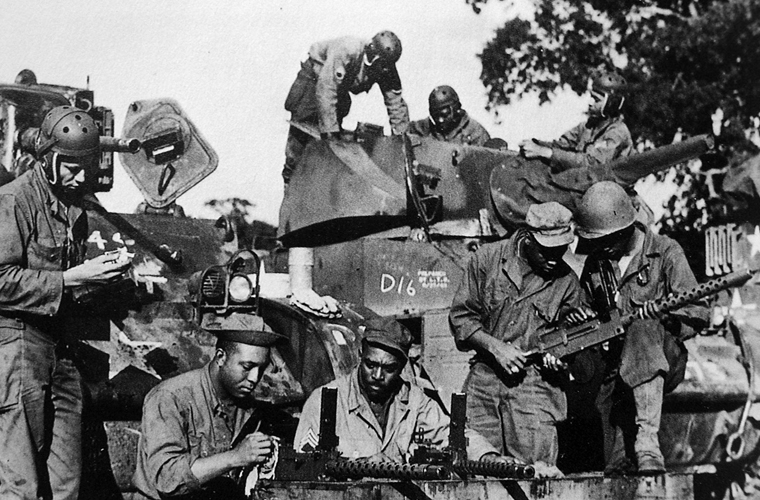 The explosion was massive, far larger than the men of the 761st Tank Battalion were expecting when they responded to a German attack in the Rhineland town of Silz, Germany.

The rounds from their M4 Sherman tanks had struck an ammunition dump in the town, and the tankers watched with a combination of sympathy and satisfaction as the houses, which had also been used to store munitions, exploded one-by-one until the town became a raging inferno. Leaving Silz in ashes, like so many other towns along the Siegfried Line, they continued to push toward the Rhine River in March 1945.

In assigning the 761st Tank Battalion to lead Task Force Rhine with elements of the 103rd Infantry Division, Army leaders hadn’t chosen just any tank battalion. The 761st was the first of its kind, the first African-American tank unit to go into combat. By that March, the tankers were steely and battle-hardened, but even before they had landed on Omaha Beach in Normandy, France, Oct. 10, 1944, they were some of the best-trained tankers in the Army, thanks to two years spent at Camp Claiborne, Louisiana, and Camp Hood, Texas.

“They trained for almost two years at a time when armor crewmen were getting as little as three months of training because of the pressures of the war. Because they were African Americans, the Army didn’t quite know what to do with them,” said former Sgt. Wayne D. Robinson, the historian for the 761st Tank Battalion Association, and a former armor crewman in the Massachusetts National Guard noting that the tankers experienced a lot of racism in their rural, Southern training grounds.

In fact, 2nd Lt. Jackie Robinson’s famous bus incident and subsequent court-martial took place while he was attached to the 761st. There were also hard-to-substantiate reports of executed Soldiers and shots fired at the train taking them from Louisiana to Texas.

“Not only is the 761st the first of its time in terms of experience,” Robinson added, “when you compare the record of the 761st to other separate tank battalions, but they’re also better … when you look at certain objective criteria like the number of enemies killed or captured, materiel captured, that kind of thing.”

When the 761st finally got to France, the tankers encountered a few individuals who may have had trouble with their darker skin, but for the most part, Soldiers were worried about their missions and about staying alive, not skin color. Many infantry soldiers didn’t even know that the tankers running with them were black, said Robinson.

“They are not obsessed with race,” said Gina DiNicolo, a former Marine officer and author of “The Black Panthers: A Story of Race, War, and Courage.” “They’re running into some problems, some challenges. But for the most part, they’re with their unit, and it clicks. … What is the thing foremost in their minds? They want to kill Hitler. … It got to the point in combat where the units were interacting like everyone was the same. These guys became one of the guys.”

Army leaders were certainly happy to see the men. Third Army’s Gen. George Patton addressed the tankers himself, saying, “I would never have asked for you if you weren’t good. I don’t care what color you are so long as you go up there and kill those Kraut sons of bitches. Everyone has their eyes on you and is expecting great things from you. Most of all, your race is looking forward to you. Don’t let them down, and, damn you, don’t let me down.”

With those words ringing in their ears — “You had to respect the man,” said 761st veteran Staff Sgt. Floyd Dade Jr. — the tankers rolled into battle, coming under heavy fire in Vic-Sur-Seille, France, Nov. 8, 1944. The men fought hard, but it was still a terrifying and disorienting experience, especially when rain turned the roads to muddy rivers that made it nearly impossible to maneuver.

“The inside of a tank is a helluva place to be when red hot, white-hot steel fragments are ricocheting around, and just can’t go anywhere else but the inside of that tank,” described Pfc. Trezzvant W. Anderson in “Come out Fighting: The epic tale of the 761st Tank Battalion.” An Army journalist, Anderson was actually attached to the 761st in the months after the war. “God, how those things would tear the insides out of a man.”

Dade remembered laughing with some infantry Soldiers, not realizing how serious the situation was until the rounds started coming in. “The tank would rock when something hit it, and we didn’t know what happened,” he continued. “We just battled like hell. … We looked and noticed that our .50-caliber gun was gone. And where it hit it, the shell — armor-piercing — they cut it off like you had a torch, you know, a welding torch. They were just that powerful. … Then I was looking for my friends. I said, ‘Where’s so and so?’ They said, ‘No man. They got it a long time ago. They didn’t get too far.'”

The men also faced a German roadblock that would have meant almost certain death. Without waiting for orders, Staff Sgt. Ruben Rivers of Able Company climbed out of his lead tank carrying a large cable. Dodging bullets, he fastened the cable to the tree in the road, and then returned to his tank to clear the road, allowing the Soldiers to proceed. “Then we got into town and we chased them out and they went to the next one,” said Dade, who was in the same company.

Barely a week later, Rivers, who had already been nominated for one Silver Star, was left with a deep, bloody leg wound from his knee to his hip when his tank hit a land mine during the unit’s Nov. 15 to 19 assault on Guebling, France, according to Dade. Rivers reluctantly let his fellow Soldiers bandage his leg before climbing into another tank, refusing further medical aid throughout the night and into the next morning when he radioed his commander that he could see the enemy.

“I was about 25 yards from him in my tank,” remembered Dade. “As we were battling, Sergeant Rivers got hit. When the Germans opened upon us, we were fighting each other like hell. [The company commander] told Rivers, ‘We are outnumbered. There are five tanks out there. Back out.’ He said, ‘No, I see them. I’m going to engage them.'”

Passing within 200 yards of the Germans, Rivers opened fire, helping cover Able Company’s withdrawal. “So the next shot came in on this turret, just took his head off,” killing Rivers and another tanker, Dade continued. Rivers received another Silver Star, and then in 1997, after a long campaign by his company commander, one of the few white officers in the 761st, Rivers belatedly received the Medal of Honor.

Another trap awaited the 761st the second day of combat, Nov. 9, only it didn’t end as well. This time the men of Charlie Company ran into a massive tank ditch near Morville, France. The trench, wrote Anderson, extended “from the woods at the edge of the high ground, down to a road leading through the area, in open country.” It was heavily mined and within range of a column of German pillboxes. Charlie Company lost seven tanks almost immediately, and as men tried to crawl to safety, German soldiers easily picked them off.

“It was cold, it was raining and alternately snowing,” wrote Anderson. Fragmentation shells were exploding everywhere, so that wicked little pieces would fly about and cut into your flesh, searing, burning, tearing into your very innards. … It was hell that day at Morville.”

Platoon leader 2nd Lt. Kenneth W. Coleman lined the men up and trailed them as he laid fire to help cover their escape. 1st Sgt. Samuel Turley stayed behind, rushing toward the enemy and standing in the open as he took out enemy machine-gun nests in a “classic, almost John Wayne type of thing,” according to DiNicolo until he was nearly cut in two. Coleman too was killed, as were 12 other tankers. American forces took the town the next day.

Coleman and Turley both received posthumous Silver Stars, although DiNicolo has documentation showing that Turley was actually nominated for a Medal of Honor. She believes that when the case was re-examined in the 1990s, there were no longer enough documents or witnesses to support awarding the nation’s highest award for valor. “His action to me is clearly a Medal of Honor action,” she said. “I can’t imagine that he [believed] he would survive that doing what he did.”

Unbeknownst to most of the men, their beloved battalion commander, Lt. Col. Paul Bates, was wounded that night — possibly by friendly fire, according to one report — and evacuated to a hospital. He wouldn’t return until February. At a time when many white officers saw a black unit as a career death knell, Bates had seen the 761st as just the opposite and had worked hard to gain command of the tankers. He treated them fairly and stood up for them in the face of discrimination and racism. Bates trained them and trained them and trained them some more, so when the untested men first faced the Germans, they were ready.

“The first two days of combat could have put any unit out for the duration of the war,” said DiNicolo, noting that today, Charlie Company at the very least would have been immediately pulled off the line, but that they were back on a mission the next day. “These guys were so well trained, they did not fall apart.”

One more Medal of Honor nomination came out of that intense, bloody November, this one for Sgt. Warren G.H. Crecy. Crecy had become known as the “baddest man in the 761st” after he had fought through enemy positions until his tank was destroyed, Nov. 10. According to reports, he used a .30-caliber machine gun to eliminate the enemy position that had destroyed his tank, as well as two German forward observers. Later, he attempted to free his new tank from the mud while under heavy fire, using the tank’s .50-caliber gun to hold off the enemy, “pouring his rain of death pellets into German bodies,” according to Anderson. Crecy never received the Medal of Honor, but he did earn a battlefield commission and eventually retired as a major.

During 183 days of continuous combat, the 761st fought all over northern and central Europe, from the Battle of the Bulge at Tillet, France, to the Battle of the Rhine, eventually making it all the way to Austria. The Army awarded the unit with four campaign ribbons: Northern France, Rhineland, Ardennes-Alsace and Central Europe. In addition, the men received 11 Silver Stars, 69 Bronze Stars, and about 300 Purple Hearts. In 1978, the 761st received a coveted Presidential Unit Citation. The cost was high, however, with 36 men killed in action, 22 in November alone. They died defending a segregated country, Robinson said, noting that the Army began desegregating shortly after the war.

“We didn’t have equal rights,” said Dade, explaining that he went home to Texas to face the same prejudice as before the war. “All odds — democracy was against us. I was just fighting for my country.”