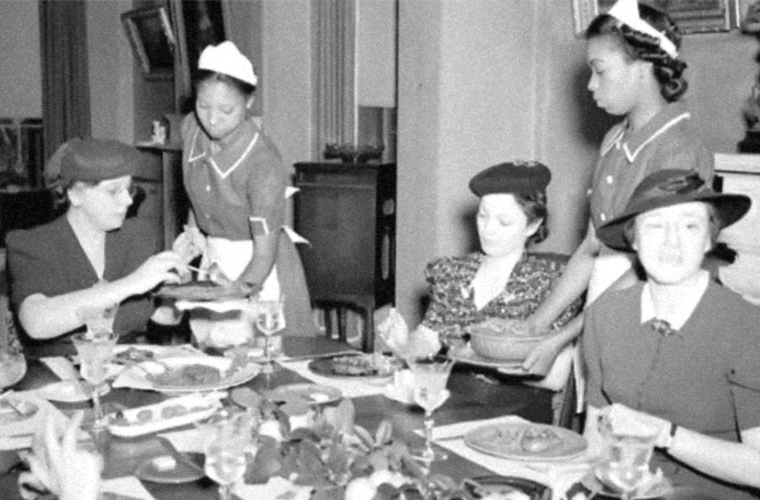 An article in Slate takes an unflinching look at how white women have benefited in the workplace from the sweat of black and brown women.

In Rethinking Work-Life Balance for Women of Color Kimberly Seals Allers makes the case that many of the gains made by white women in the workforce, including the quest for work-life balance, would not have been achieved without black and brown women relieving them of domestic burdens:

Throughout history, white women have used the labor of women of color to reduce their own domestic burden and free themselves up for corporate and civic pursuits. Simply put, the labor of Black, Hispanic and Asian American women has raised white women’s standard of living.

She points out that much of this work by black women was domestic work. “…we breast-fed your babies. We raised your children. We cleaned your houses. We did your laundry. We cooked your food,” she writes. Seals Allers also mentions that even today, women of color still make up the largest portion of domestic workers.

I’m talking about native-English speaking, upper-middle-class, educated women. They’re the only group of women for whom feminism seems to have any relevance or long-term benefit. That hasn’t always been the case, but feminism has become increasingly whitewashed and richer since the movement’s inception nearly 50 years ago.

The black versus white feminist conflict even made its way into the California Women’s March planned this January. The event organizers canceled the event noting a lack of participation by women of color. NBC News reports: “Up to this point, the participants have been overwhelmingly white, lacking representation from several perspectives in our community,” a post on the march’s Facebook page read. “Instead of pushing forward with crucial voices absent, the organizing team will take time for more outreach.”

The same controversy afflicted the Women’s March last January. Black Enterprise writer Caroline Clarke wrote about black women’s reactions to the march, at the time, after she attended:

“Headed home on the train, I caught another black woman’s eye and we both smiled. “Wasn’t it great?” I said, assuming she’d marched. She shook her head. “White women got us into this mess and now they want to march? Not with me.” Oh, right. I thought of the election’s exit polls, so shocking, I knew them by heart: 94% of black women voted for Hillary. In fact, the majority of all women voted against Trump – except white women, 53% of whom voted him in.”

There is an undeniable lack of allyship that black women feel when it comes to white women’s fights for equality. Perhaps that is why in concluding her article, Seals Allers demands “White women must openly acknowledge the role women of color have played in their advancement and make sure all are included at the discussion table for new policies, innovative businesses and creating paradigm shifts.”