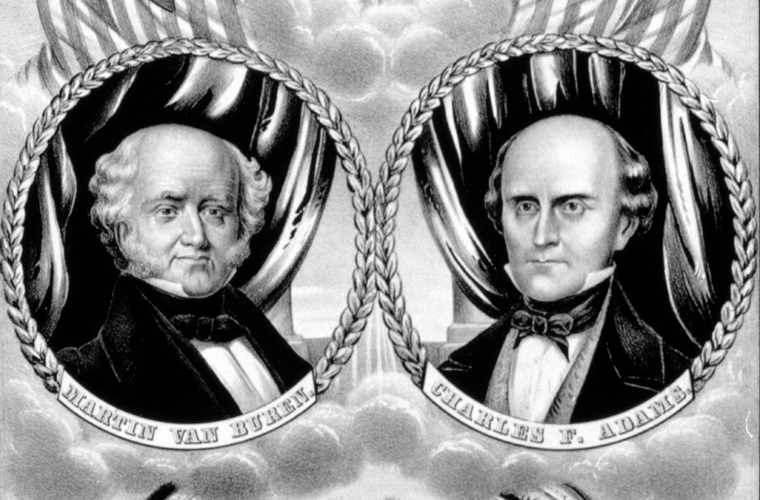 The Free Soil Party was an American political party that only survived through two presidential elections, in 1848 and 1852. Essentially a single issue reform party dedicated to stopping the spread of slavery to new states and territories in the West, it attracted a very dedicated following. But the party was perhaps doomed to have a fairly short life simply because it could not generate enough widespread support to grow into a permanent party.

The most significant impact of the Free Soil Party was that its unlikely presidential candidate in 1848, former president Martin Van Buren, helped tilt the election. Van Buren attracted votes that otherwise would have gone to the Whig and Democratic candidates, and his campaign, especially in his home state of New York, had enough impact to change the outcome of the national race.

Despite the party’s lack of longevity, the principles of the “Free Soilers” outlived the party itself. Those who had participated in the Free Soil party were later involved in the founding and rise of the new Republican Party in the 1850s. The heated controversy prompted by the Wilmot Proviso in 1846 set the stage for the Free Soil Party to quickly organize and participate in presidential politics two years later. The brief amendment to a congressional spending bill related to the Mexican War would have prohibited slavery in any territory acquired by the United States from Mexico.
Though the restriction never actually became law, the passage of it by the House of Representatives led to a firestorm. Southerners were enraged by what they considered an attack on their way of life.
The influential senator from South Carolina, John C. Calhoun, responded by introducing a series of resolutions in the U.S. Senate stating the position of the South: that slaves were property, and the federal government could not dictate where or when citizens of the nation could take their property.
In the North, the issue of whether slavery could spread westward split both major political parties, the Democrats, and the Whigs. In fact, the Whigs were said to have split into two factions, the “Conscience Whigs” who were anti-slavery, and the “Cotton Whigs,” who were not opposed to slavery.

With the slavery issued very much on the public mind, the issue moved into the realm of presidential politics when President James K. Polk chose not to run for a second term in 1848. The presidential field would be wide open, and the battle over whether slavery would spread westward seemed like it would be a deciding issue. The Free Soil party came about when the Democratic Party in New York State fractured when the state convention in 1847 would not endorse the Wilmot Proviso. Anti-slavery Democrats, who were termed “Barnburners,” teamed up with “Conscience Whigs” and members of the pro-abolitionist Liberty Party.

In the complicated politics of New York State, the Barnburners were in a fierce battle with another faction of the Democratic Party, the Hunkers. The dispute between Barnburners and Hunkers led to a split in the Democratic Party. The anti-slavery Democrats in New York flocked to the newly created Free Soil Party, and set the stage for the 1848 presidential election. The new party held conventions in two cities in New York State, Utica, and Buffalo, and adopted the slogan “Free Soil, Free Speech, Free Labor, and Free Men.” The party’s nominee for president was an unlikely choice, a former president, Martin Van Buren. His running mate was Charles Francis Adams, editor, author, and grandson of John Adams and son of John Quincy Adams.

That year the Democratic Party nominated Lewis Cass of Michigan, who advocated a policy of “popular sovereignty,” in which settlers in new territories would decide by vote whether to allow slavery. The Whigs nominated Zachary Taylor, who had just become a national hero based on his service in the Mexican War. Taylor avoided the issues, saying little at all. In the general election in November 1848, the Free Soil Party received about 300,000 votes. And it was believed they took enough votes away from Cass, especially in the critical state of New York, to swing the election to Taylor.

The Compromise of 1850 was assumed, for a time, to have settled the issue of slavery. And thus the Free Soil Party faded away. The party nominated a candidate for president in 1852, John P. Hale, a senator from New Hampshire. But Hale only received about 150,000 votes nationwide and the Free Soil Party was not a factor in the election. When the Kansas-Nebraska Act, and outbreaks of violence in Kansas, reignited the issue of slavery, many supporters of the Free Soil Party helped found the Republican Party in 1854 and 1855. The new Republican Party nominated John C. Frémont for president in 1856, and adapted the old Free Soil slogan as “Free Soil, Free Speech, Free Men, and Frémont.”