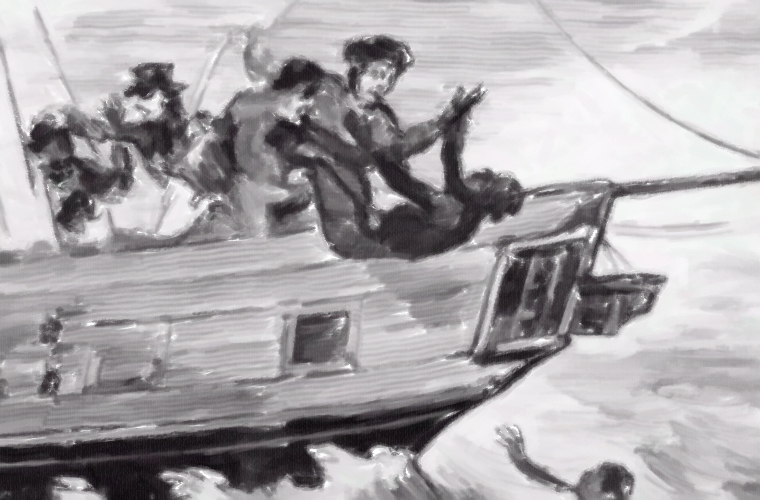 In August 1781, a British slave ship, the Zong, left Ghana with 442 slaves aboard – twice the number it was designed to carry – bound for Jamaica. The ship’s owners claimed that due to navigational errors, it took longer than anticipated to reach Jamaica, and as the water was running low, the crew threw more than 130 live slaves overboard. The truth of what happened is disputed and evidence suggested that rain meant the ship had enough water.

As was common practice, the shipowners had taken out insurance for their “cargo” of enslaved people. When news of the massacre reached England, they made a claim for compensation. The insurers refused to pay and the ship owners took them to court.

The case demonstrates how the law facilitated the trans-Atlantic slave trade, but also strengthened the campaign for abolition. It was, says James Walvin, author of the book The Zong, and professor emeritus of history at the University of York, “mass murder masquerading as an insurance claim”.

A jury heard the dispute, Gregson v Gilbert, at London’s Guildhall in March 1783, and ruled in favor of the ship owners. The insurers appealed, as solicitor Andrew Bicknell notes, not on the basis of common humanity, but because it occurred as a result of errors of navigation and mismanagement of the vessel, namely insufficient water onboard.

The case came before the lord chief justice, Lord Mansfield, who in a previous judgment had ruled that there was never a legal basis for slave ownership within England under English law. He decided there should be a retrial because of new evidence which suggested that the captain and crew had been at fault.

“It appears that no trial ever took place, so happily the owners didn’t receive their insurance payment, but perhaps a chance was lost by the court to put down a moral marker in relation to such a case,” says Bicknell.

While the facts of the Zong case were unusual, he says there would have been many claims under policies of cargo insurance for the loss of slaves during their transportation.

“It was standard practice for slavers to insure their cargo of slaves and had the Zong simply sunk in a storm with a similar loss of life, no such notoriety would have been attached to the case. Almost certainly, the insurance claim for the value of the lost slaves would have been paid,” he says. The only restriction was that deaths had to arise from “perils of the seas” and would not for example cover deaths through disease or insurrection.

Some academics have suggested that the West Indian trade in slaves plus slave-grown produce accounted for up to 40% of the cargo insurance premium in the London market of the late 18th century.

The “hugely important” case, says Walvin, exposed the brutality of the trade, reducing African lives to chattels and mere items of trade or cargo that could be insured and claims made for their loss.

After the first trial, anti-slavery campaigner Granville Sharpe attempted unsuccessfully to have the ship’s crew prosecuted for murder. Reports of the massacre increased momentum for the abolitionist movement.

“The Zong case lit the blue touch paper in England – it aroused abolitionist anger, and fed into the initial campaigns against the Atlantic slave trade,” says Walvin.

It wasn’t until 50 years later that the Slavery Abolition Act of 1833 abolished slavery in most British colonies, and the League of Nations 1926 Slavery Convention sought global prohibition of slavery and the slave trade.

The UK introduced the Modern Slavery Act in 2015, which brought together previous laws seeking to prevent and prosecute slavery, servitude, forced labor, and human trafficking, as well as making big businesses accountable for slavery and labor abuses in their supply chain.

While international law has shifted from permitting and regulating slavery to denying and outlawing it, Katarina Schwarz, professor of antislavery law at the University of Nottingham, stresses that there is still a long way to go.

“Everyone assumes that slavery is illegal around the world, but almost half of all countries have no criminal offense of slavery and there are huge gaps in the laws, including in the UK, to combat slavery and protect and support survivors,” she says.