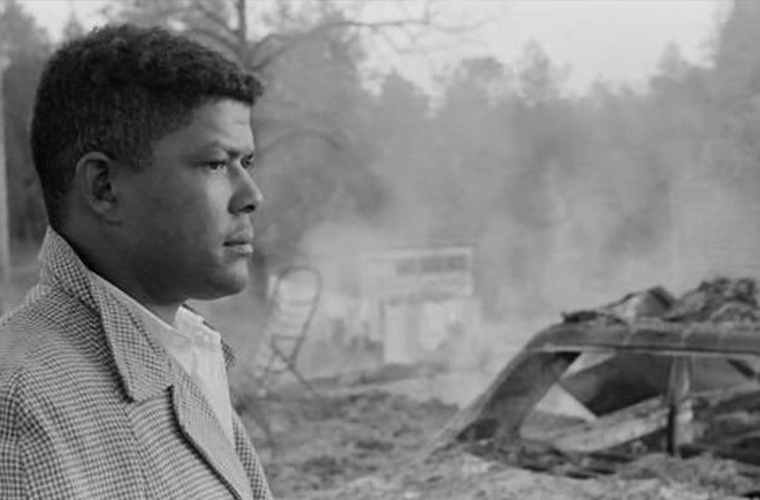 Vernon Dahmer was born  in 1908  in the Kelly Settlement, Forrest County, Mississippi, his parents were Ellen Louvenia (Kelly) and George Washington Dahmer. George Dahmer was a Caucasian man identified as being an honest, hardworking man with outstanding integrity. His occupation was a farmer. Ellen Kelly was biracial because of her mother, Henrietta. Henrietta was a biracial child born out of wedlock by a white slave owner, O.B Kelly, and one of his slaves. She was given to a black family, called the McCombs.  Young Dahmer attended Bay Spring High School until the tenth grade. He was light-skinned enough to pass as a white man, but chose to forgo the privileges of living as a Caucasian man and faced the daily challenges of being a black man in Mississippi.

In 1949 Dahmer was in the process of making out his new registration card when Luther Cox denied his attempts to re-register. Luther Cox was a white segregationist and the authority figure in charge of registered voters in Forrest County.  Cox would only authorize a registration of a black person if they could answer the question “How many bubbles are in a bar of soap?”  In 1950, fifteen leaders of Forrest County’s black community, including Dahmer, filled a lawsuit against Cox for his administration of the voting laws; preliminary injunction. Twelve years later, in March 1962, the preliminary injunction was in motion of being viewed by the court of law. Dahmer had testified in court against Luther Cox and his testimony helped demonstrate the pattern of discrimination in the county.

In the 1950s Dahmer and Medgar Evers founded a youth NAACP chapter in Hattiesburg. The student chapter did not last longer than a year.  Dahmer was married three times. His first wife was Winnie Laura Mott; their marriage of five years ended in divorce. In 1949, Dahmer remarried; this time to a woman named Aura Lee Smith. Unfortunately, Aura died after a long illness.  Ellie Jewel Davis was his third and final wife; she was a teacher from Rose Hill, Mississippi, and had recently moved to Forrest County. The couple met after working on the school board together and married in March 1952.  The couple had two children together to add to the six children Dahmer had with his first two wives, making a total of seven boys and one girl. The family and their home was located north of Forrest County and was part of the Kelly Settlement, close to the Jones County border; the settlement (named for Dahmer’s maternal grandfather). Ellie Dahmer taught for many years in Richton, Mississippi and retired in 1987 from the Forrest County school system.  Dahmer was a member of Shady Grove Baptist Church where he served as a music director and Sunday School teacher. He was the owner of a grocery store, sawmill, planning mill, and also cotton farm. His main objective was to make a living for himself and to provide work for somebody else. He would hire local individuals from the community to work for him and did not discriminate between black or white.

During the 20th century Civil Rights Movement, Dahmer served two terms as president of the Forrest County Chapter of the National Association for the Advancement of Colored People (NAACP) and led voter registration drives in the 1960s. His wife Ellie said “He was a good progressive Christian man. He wasn’t a mean, bitter Civil Rights worker, because he saw good in white as well as he did in black.”  As president of the Forrest County Chapter of the NAACP, he had personally asked the Student Nonviolent Coordinating Committee (SNCC) to send workers to help aid the voter registrations efforts being made by blacks in Hattiesburg, Mississippi. SNCC had sent two workers, Curtis Hayes and Hollis Watkins, to Hattiesburg. The act of calling SNCC to help aid the efforts made by the NAACP would eventually cost him his NAACP presidency.

Dahmer continued to be supportive of the SNCC throughout the Civil Rights Movement. Dahmer’s farm quickly became a home away from home for SNCC volunteers. The farm was also used for registration projects and helped employ the committee volunteers.  Dahmer was also working closely with the Coalition for Free and Open Elections (COFO) and the Delta Ministry.  Dahmer kept a voter registration book in his grocery store in late 1965 to make it easier for blacks to register. Dahmer also made a public service announcement over the radio stating that he would help the local African American population pay a poll tax for the right to vote if they could not afford to do so themselves. His mantra was, “If you don’t vote, you don’t count”, and those words, which he repeated on his deathbed, were used as his epitaph.  He and his family had been sleeping in shifts after receiving numerous death threats throughout the year.  On January 10, 1966, the Dahmer home was attacked by the White Knights of the Ku Klux Klan.  Their home, grocery store, and car were all destroyed in the fire. He was taken to the hospital and died due to his lungs being severely burned and smoke inhalation.

Four of Dahmer’s sons were in the United States Military and had left their posts to help bury their father and reconstruct their family home.  The Hattiesburg area Chamber of Commerce led a community effort to rebuild the Dahmer home. Local and state businesses donated materials, unions donated their services, and students from the University of Southern Mississippi volunteered.  The chamber provided college funds for Dahmer’s school-aged children.  After his death, a street and a park in Hattiesburg were named in his honor. On July 26, 1986, a memorial was also dedicated at the park.  Authorities indicted fourteen men, most with Ku Klux Klan connections, were tried for the attack on the Dahmer home. Thirteen were brought to trial, eight on charges of arson and murder. Four were convicted and Billy Roy Pitts (Sam Bowers’ body guard), who had dropped his gun at the crime scene, entered a guilty plea and had his gun turned in as state’s evidence. Billy faced just three years of his federal sentence. However, three out of four of those convicted were pardoned within four years. In addition, eleven of the defendants were tried on federal charges of conspiracy to intimidate Dahmer because of his civil rights activities. Former Ku Klux Klan Imperial Wizard Sam Bowers, who was believed to have ordered the murder, was tried four times and each time invoked the Fifth Amendment. Each trial ended in a mistrial.

In 1991, the case was reopened by the state of Mississippi. The case lasted for seven years, and ended by the conviction and sentencing to life in prison, of Imperial Wizard Bowers in 1998.  He died in the Mississippi State Penitentiary on November 5, 2006 at the age of 82.   In 1992, Dahmer’s widow, Ellie, was elected election commissioner of District 2, Forrest County. For more than a decade, she served in this position, supported by both black and white residents, in the same district where her husband was killed for his voting rights advocacy.  In 2007, Dahmer was posthumously honored with the Vernon Dahmer Collection at William Carey University in Hattiesburg.  In 2016, the Mississippi State Legislature honored the civil rights leader by designating January 10 as Vernon Dahmer Day. A commemoration ceremony, which included Dahmer’s widow and family, was held in Hattiesburg on the 50th anniversary of his death. Vernon Dahmer practiced racial, class, small business and color based intersectionality in a tough American segregated environment and lost his life because of his belief in it. Today his family still attends the Shady Grove Baptist Church and are very active in the community.

Ellie Dahmer, widow of slain civil rights leader Vernon Dahmer, being assisted to her car by family members after Dahmer’s funeral on Jan. 15, 1966.