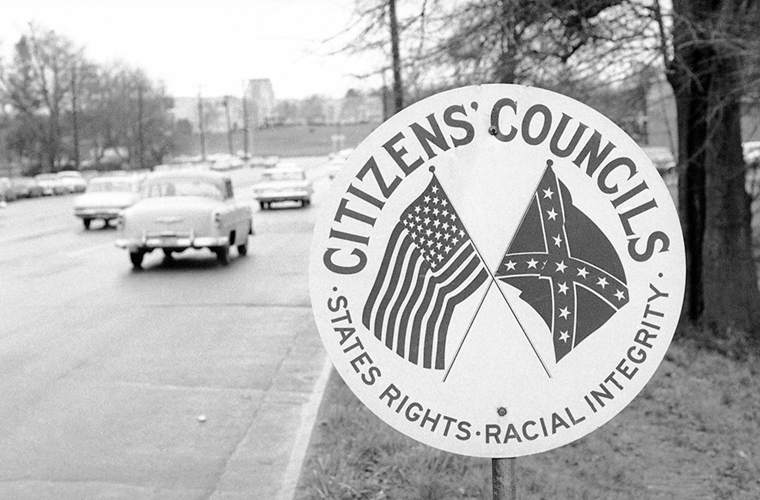 In response to the 1954 Brown v. Board of Education decision ending school segregation, white segregationists throughout the South created the White Citizens’ Councils (WCC). These local groups typically drew a more middle and upper-class membership than the Ku Klux Klan and, in addition to using violence and intimidation to counter civil rights goals, they sought to economically and socially oppressed blacks. Martin Luther King faced WCC attacks as soon as the Montgomery bus boycott began and was a target of these groups throughout his career.

In January 1956, a month after the start of the boycott, W. A. Gayle, the mayor of Montgomery, joined the WCC, publicly declaring, “I think every right-thinking white person in Montgomery, Alabama and the South should do the same. We must make certain that Negroes are not allowed to force their demands on us” (Azbell, “Council Official Says”). By the next month, WCC membership had doubled. The WCC attempted multiple strategies to stop the boycott, from prosecuting the boycott organizers to pressuring insurance agencies throughout the South to cancel policies for church-owned vehicles.

King appealed to President Dwight D. Eisenhower to investigate violence perpetrated by WCC members after Montgomery Improvement Association members’ homes were bombed, and effigies of a black man and a white man “who ‘talked integration’” were hung in downtown Montgomery. The attorney general responded to King’s appeal, writing that “the activities of the White Citizens Council … [do] not appear to indicate violations of federal criminal statutes”.

In a 1956 New York speech, King described the WCC as a modern Ku Klux Klan, targeting black and white people supportive of civil rights. “They must be held responsible for all of the terror, the mob rule, and brutal murders that have encompassed the South over the last several years,” King said. “It is an indictment on America and democracy that these ungodly and unethical and un-Christian and un-American councils have been able to exist all of these months without a modicum of criticism from the federal government”.

King encountered WCC groups all over the South, from Selma, Alabama—the first Alabama town to create a White Citizens’ Council—to Jackson, Mississippi, where Medgar Evers, the local National Association for the Advancement of Colored People chairman, was killed by a WCC member. King feared that WCC activities would prevent white moderates from becoming involved in desegregation issues. WCC groups, King argued, “demand absolute conformity from whites and abject submission from Negroes.… What channels of communication had once existed between whites and Negroes have thus now been largely closed”.

As late as 1966, the White Citizens’ Council teamed up with the virulently anti-Communist John Birch Society to petition the federal government to investigate whether King and over 100,000 other rights activists had Communist connections. Yet King believed that their power was fading: “Two years ago Americans, in a presidential election, overwhelmingly rejected representatives of Birchism and the White Citizens Council,” he said, referring to Barry Goldwater’s defeat by Lyndon B. Johnson. “It is my honest opinion that this same majority still finds repulsive persons who strive to impose 19th Century standards upon our society”.