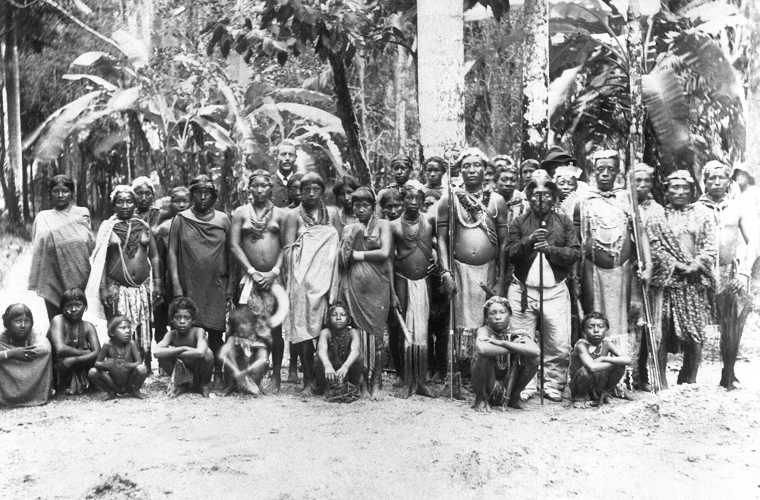 Arawak, American Indians of the Greater Antilles and South America. The Taino, an Arawak subgroup, was the first native peoples encountered by Christopher Columbus on Hispaniola. The island Arawak was virtually wiped out by Old World diseases to which they had no immunity. A small number of mainland Arawak survive in South America. Most (more than 15,000) live in Guyana, where they represent about one-third of the Indian population. Smaller groups are found in Suriname, French Guiana, and Venezuela. Their language, also called Arawak, is spoken chiefly by older adults, a characteristic that commonly foretells the death of a language.

The Antillean Arawak, or Taino, were agriculturists who lived in villages, some with as many as 3,000 inhabitants and practiced slash-and-burn cultivation of cassava and corn (maize). They recognized social rank and gave great deference to theocratic chiefs. Religious belief centered on a hierarchy of nature spirits and ancestors, paralleling somewhat the hierarchies of chiefs. Despite their complex social organization, the Antillean Arawak were not given to warfare. They were driven out of the Lesser Antilles by the Caribs shortly before the appearance of the Spanish.

The South American Arawak inhabited northern and western areas of the Amazon basin, where they shared the means of livelihood and social organization of other tribes of the tropical forest. They were sedentary farmers who hunted and fished, lived in small autonomous settlements, and had little hierarchical organization. The Arawak were found as far west as the foothills of the Andes. These Campa Arawak, however, remained isolated from influences of the Andean civilizations.

Arawak people audience with the Dutch Governor in Paramaribo, Suriname, 1880