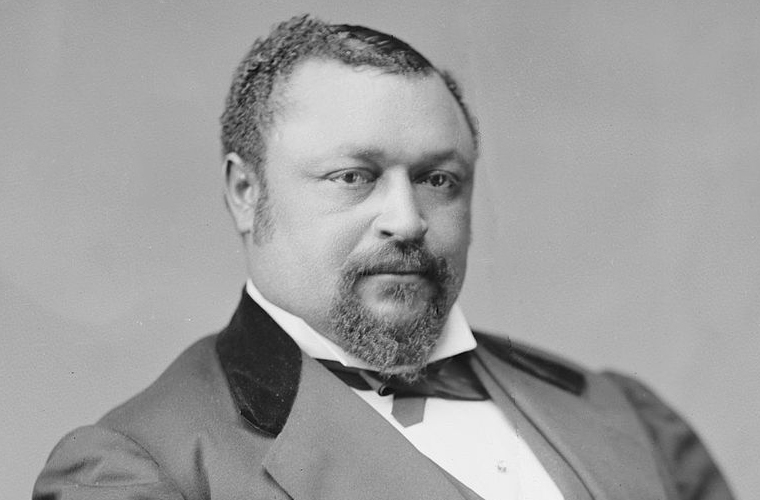 Formerly enslaved, Blanche K. Bruce made history as the first African American to serve a full term in the U.S. Senate. Blanche K. Bruce was born March 1, 1841, in Farmville, Virginia. In 1864, after fleeing his master, he opened a school for black children. In 1870, the Mississippi Senate elected him its sergeant-at-arms. He served as a Republican U.S. Senator for Mississippi from 1875 to 1881. He became U.S. Treasury register after he left the Senate, and again in 1897. He died in Washington, D.C. on March 17, 1898.

Blanche K. Bruce was born Blanche Bruce on March 1, 1841, in Farmville, Virginia. His mother, Polly, was enslaved. Bruce’s father was most likely Pettus Perkinson, who was Polly’s master and the son-in-law of her deceased previous master, Lemuel Bruce.

Blanche K. Bruce had ten siblings. Unlike most slave children, he was afforded the advantage of learning to read and write with a private tutor. Still, Bruce was not exempt from slavery’s injustices. Growing up, he was forced to work as a servant to his half-brother William Perkinson.

In his adulthood, Bruce would take the middle name Kelso; he is therefore commonly known as Blanche K. Bruce. A few years after the Civil War started, Bruce ran away to Lawrence, Kansas and tried unsuccessfully to sign up with the Union Army. He moved back to Missouri in 1864, near the end of the Civil War. Living as a free man and inspired by his own passion for learning, Bruce started a school for black children in Hannibal.

According to some accounts, in 1866 Bruce attended Oberlin College in Ohio and stayed on for two years, although Oberlin has failed to produce any records to support this theory. In 1868 he relocated to Mississippi and became a cotton farmer. Over time, he would accumulate 640 acres of land for his plantation.

Bruce made his foray into politics in 1870, when the Mississippi Senate elected him its sergeant-at-arms.

In 1874, the Mississippi state legislature elected Bruce to be its representative in the U.S. Senate, making him the second African-American to hold the position. He served from 1875-1881, and thus Bruce became the first African-American citizen to work a full term in the United States Senate.

Bruce acted as presiding officer at the Republican National Convention in 1880 and 1888. Both times he received vice presidential nominations. During the Garfield Administration, Bruce was a register of the U.S. Treasury. In 1889, President Harrison selected Bruce as a record of deeds for Washington, D.C. Bruce reassumed his treasury position under the McKinley administration in 1897.

Bruce died of diabetes-related complications in Washington, D.C., on March 17, 1898. The 57-year old politician had been married to a teacher named Josephine Beall Wilson. The couple had one son, Roscoe Conkling Bruce, who grew up to become a notable educator.