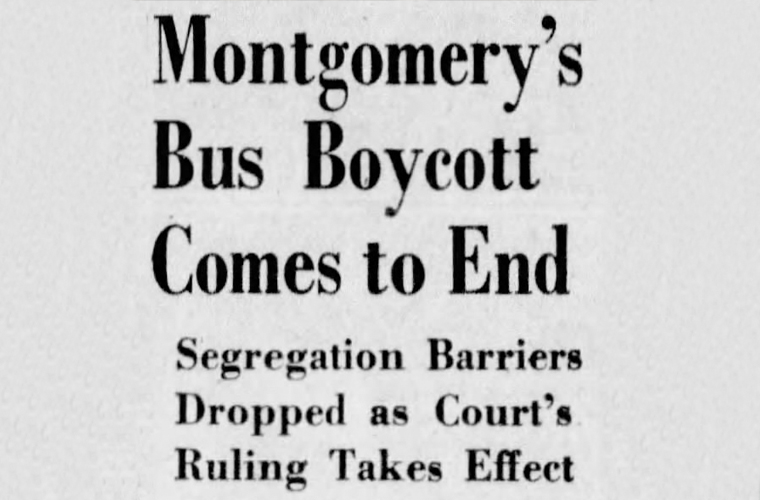 On April 29, 1955, Aurelia Browder, like so many other black residents of Montgomery, was mistreated on a city bus. According to her testimony in the civil case, she was forced by the bus driver “to get up and stand to let a white man and a white lady sit down.” Three other plaintiffs, Mary Louise Smith, Claudette Colvin, and Susie McDonald, had reported similar mistreatment. The cumulative effect of these “demeaning, wretched, intolerable impositions and conditions,” as boycott organizer Jo Ann Robinson referred to them, inspired Montgomery’s black community to begin developing plans for a boycott that eventually began after the arrest of Rosa Parks.

If it seems odd that Parks’ name is not listed among the plaintiffs, it is because her persona and that of Dr. Martin Luther King Jr. have dominated the cultural mythology of the boycott (and the movement at large), a fact that poses special challenges to educators who strive to capture the unseen and resist telling a simple story in their teaching about the civil rights movement. It is also a fact that has troubled Butler Browder, Aurelia Browder’s son, who laments that the world never got to know the woman behind the lawsuit.

“She believed in the power of unity. She believed in the power of togetherness. But she also believed that she had to be the one to stand because the others wouldn’t,” Browder says. “Five women had stories to tell: instances of individual mistreatment. They came together to change things for the world. Their concern at the time was not for their own personal thoughts or beliefs, but for the beliefs and the theories of a whole. They felt like no price was too great to pay for achieving what they thought they could achieve.”

Browder is not surprised his mother ended up as one of the plaintiffs. According to him, after being mistreated on the bus in April 1955, she talked of bringing her own suit, even approaching the NAACP about supporting her. But as Robinson notes in her book The Montgomery Bus Boycott and the Women Who Started It, local leaders “hesitated to file the desegregation cases because of fear of reprisals they felt the filing would evoke.” Browder also recalls an aunt warning his mother that agitating could get her killed. She was undeterred, reportedly reflecting that she had “to die for something. If you live and you haven’t stood for anything, you didn’t live for anything either.”

The Boycott
Jo Ann Robinson sounded the initial call for the black citizens of Montgomery to prepare for a one-day boycott; after Parks’ arrest in December 1955, she and other organizers formed the Montgomery Improvement Association (MIA) to formalize their efforts. Their initial goals were limited in scope: first-come-first-served seating, more courteous treatment, and the hiring of more black drivers.

About two months in, those goals changed. Negotiations with the city were proving unsuccessful. The city refused to consider hiring “colored” drivers and offered only conciliatory measures that fell short of the MIA’s goals. Meanwhile, the support system of carpools and taxis grew stronger, and King’s star was rising. Voices within the movement called for a legal challenge to segregation beyond the mass protest; Montgomery attorney Fred Gray had even begun to research potential cases.

On January 23, 1956, the mayor called for a “get tough” approach to bring the boycott into check; King’s home was bombed by white supremacists a week later. Mounting hostilities within the city convinced boycott leaders that a more robust legal strategy was necessary. As legal scholar Robert Jerome Glennon notes, “the bombing incident changed the thinking of the MIA leadership, which authorized Gray to commence a federal suit.” The boycott continued, but now a parallel legal challenge to bus segregation was fighting its way through the court system.

Parks’ appeal was also pending in Montgomery court. (She had been charged and fined in December for refusing the bus driver’s orders and for disorderly conduct). However, because hers was a criminal case, it would follow a different path through the court system and prove harder to elevate to the Supreme Court. As Gray later wrote, “I wanted the court to have only one issue to decide—the constitutionality of the laws requiring segregation on the buses in the city of Montgomery.” If Browder, Smith, Colvin, and McDonald sued the city, they could make the claim that their 14th Amendment rights had been violated by the segregationist practices of the city and the bus company.

The Lawsuit
Gray filed the case on February 1, 1956, with support from the MIA and the NAACP. (The defendant, William A. Gayle, was the mayor of Montgomery at the time.) Because Browder v. Gayle challenged the constitutionality of a state statute, it was heard by a three-judge panel, including Frank Johnson, who would overturn Governor George Wallace’s 1965 attempts to block the march from Selma. All four women testified to their mistreatment on city buses while the city argued that it had been enforcing the laws as written. In a 2-1 decision, issued on June 5, the panel ruled that “the enforced segregation of black and white passengers on motor buses … violates the Constitution and laws of the United States,” specifically the Equal Protection Clause of the 14th Amendment. The city immediately appealed the ruling, sending it to the Supreme Court for review.

The boycott continued through the remaining months of 1956, capturing attention and igniting passions across the country: Black citizens were finally participating in a mass direct-action movement to resist Jim Crow, but white resistance was still formidable and segregated buses were still the law. In his book From Jim Crow to Civil Rights, legal scholar Michael Klarman notes that “rather than making minimalist concessions, Montgomery officials became intransigent, … arresting boycott organizers on fabricated charges, joining the citizens’ council, and failing to suppress violence against boycott leaders.” Black taxi drivers had supported the boycott by agreeing to ferry passengers at below-market rates, but the city banned this practice. City officials also arrested King and more than 80 boycott leaders, using a 1921 law that prohibited actions obstructing lawful business—in this case, the private bus company operations. (King was given jail time but did not serve his sentence; he did pay hefty fines.)

By November 1956, Montgomery officials had filed for an injunction that would potentially eliminate the taxi-and-shuttle system altogether, an outcome that could derail—or even end—the boycott. On the 12th of that month, as boycott leaders waited anxiously for the ruling on the injunction, King used a sermon to rally his followers, asking them to “believe that a way will be made out of no way.” He says in his memoir that he felt “the cold breeze of pessimism passing through the audience” that day. But, on November 13, 1956, the Supreme Court upheld the lower court’s decision in Browder v. Gayle, legally ending racial segregation on public transportation in the state of Alabama.

Selective Memory
The Browder v. Gayle ruling would not be made official until December 20, when it was served to city officials. That is also the date history books typically point to when declaring the boycott a success, but there is a problem with that line of thinking. The significance of the boycott as a consciousness-raising, galvanizing experience cannot be overstated, but with segregationist obstruction continuing, black resolve potentially waning and another winter approaching, scholars disagree about whether the boycott would have succeeded without the ruling.

Aurelia Browder’s story has been marginalized in most accounts of civil rights history. Most versions of this desegregation story begin with Rosa Parks’ courageous stand and end with the Supreme Court’s ruling, often failing to mention the case or the names of Browder and the other plaintiffs. Part of this likely stems from our preference for the lone hero standing against injustice. For students studying the movement, the knowledge that the boycott was the carefully planned and meticulously orchestrated work of thousands of largely unknown activists is—in and of itself—a revelation, and has the power to build an understanding of the difficult process behind social change. But without a true picture of how legal activism intertwined with grassroots organizing to elicit change, the revelation will always be incomplete. Or as Butler Browder puts it: “If it’s worth teaching, it’s worth teaching the whole story, not just a portion of it. … The parts you leave out may just turn out to make your story a lie.”

On June 19, 1956, the U.S. District Court three-judge panel ruled that Section 301 (31a, 31b, and 31c) of Title 48, Code of Alabama, 1940, as amended, and Sections, 10 and 11 of Chapter 6 of the Code of the City of Montgomery, 1952 “deny and deprive plaintiffs and other Negro citizens similarly situated of the equal protection of the laws and due process of law secured by the Fourteenth Amendment,” (Browder v. Gayle, 1956). The court essentially decided that the precedent of Brown v. Board of Education (1954) could be applied to Browder v. Gayle.

On November 13, 1956, in Browder v. Gayle, United States Supreme Court outlawed racial segregation on buses, deeming it unconstitutional. The court order arrived in Montgomery, Alabama on December 20, 1956. The bus boycott ended on December 21, 1956. However, more violence erupted following the court order, as snipers fired into buses and into Dr. King’s home, and bombs were thrown into churches and into the homes of many church ministers.