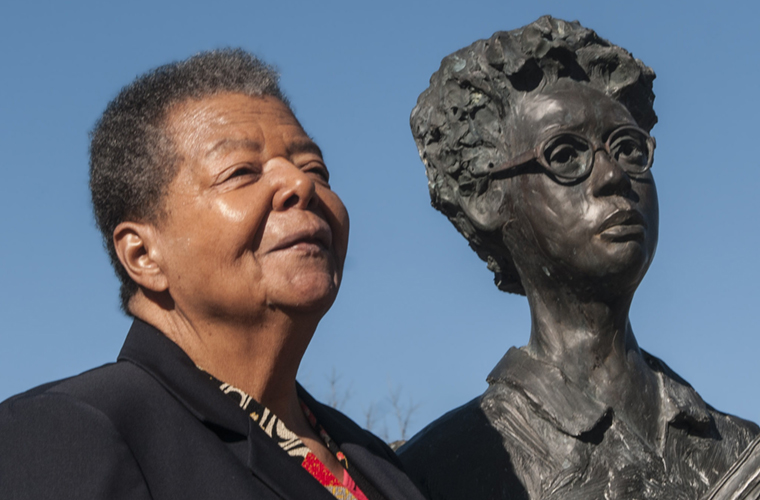 Elizabeth Ann Eckford made history as a member of the Little Rock Nine, the nine African-American students who desegregated Little Rock Central High School in 1957. The image of fifteen-year-old Eckford, walking alone through a screaming mob in front of Central High School, propelled the crisis into the nation’s living rooms and brought international attention to Little Rock (Pulaski County).

Elizabeth Eckford was born on October 4, 1941, to Oscar and Birdie Eckford, and is one of six children. Her father worked nights as a dining car maintenance worker for the Missouri Pacific Railroad’s Little Rock station. Her mother taught at the segregated state school for blind and deaf children, instructing them on how to wash and iron for themselves.

On September 4, 1957, Eckford arrived at Central High School alone. The Little Rock Nine were supposed to go together, but their meeting place was changed the previous night. The Eckford family had no phone, and so Daisy Bates intended to go to their place early the next day but never made it. As a result, Eckford was alone when she got off the bus a block from the school and tried to enter the campus twice, only to be turned away both times by Arkansas National Guard troops, there under orders from Governor Orval Faubus. She then confronted an angry mob of people—men, women, and teenagers—opposing integration, chanting, “Two, four, six, eight, we ain’t gonna integrate.” Eckford made her way through the mob and sat on a bus bench at the end of the block. She was eventually able to board a city bus and went to her mother’s workplace.

Because all of the city’s high schools were closed the following year, Eckford did not graduate from Central High School, but she had taken correspondence and night courses and so had enough credits. She was accepted by Knox College in Illinois but soon returned to Little Rock to be closer to her parents. She also attended Central State University in Wilberforce, Ohio, and has a BA in history.

Eckford served in the U.S. Army for five years, serving for her first two as a pay clerk and then, upon reenlisting, worked as an information specialist and wrote for the Fort McClellan, Alabama, and the Fort Benjamin Harrison, Indiana, newspapers. Eckford has held various jobs throughout her life. She has been a waitress, history teacher, welfare worker, unemployment and employment interviewer, and military reporter. She currently works as a probation officer in Little Rock.

Eckford was awarded the prestigious Spingarn Medal by the National Association for the Advancement of Colored People (NAACP), as were the rest of the Little Rock Nine and Daisy Bates, in 1958. In 1997, Elizabeth Eckford shared the Father Joseph Biltz Award (presented by the National Conference for Community and Justice) with Hazel Bryan Massery, a segregationist classmate who appears in the famous Will Counts photograph, and during the reconciliation rally of 1997, the two former adversaries made speeches together. In 1999, President Bill Clinton presented the nation’s highest civilian award, the Congressional Gold Medal, to the members of the Little Rock Nine. She is currently a probation officer in Little Rock and is the mother of two sons.

In 2018, Eckford released a book for young readers, The Worst First Day: Bullied while Desegregating Central High, co-authored with Dr. Eurydice Stanley and Grace Stanley and featuring artwork by Rachel Gibson. Later that year, the Elizabeth Eckford Commemorative Bench was dedicated at the corner of Park and 16th streets, and she received the Community Truth Teller Award from the Arkansas Community Institute.