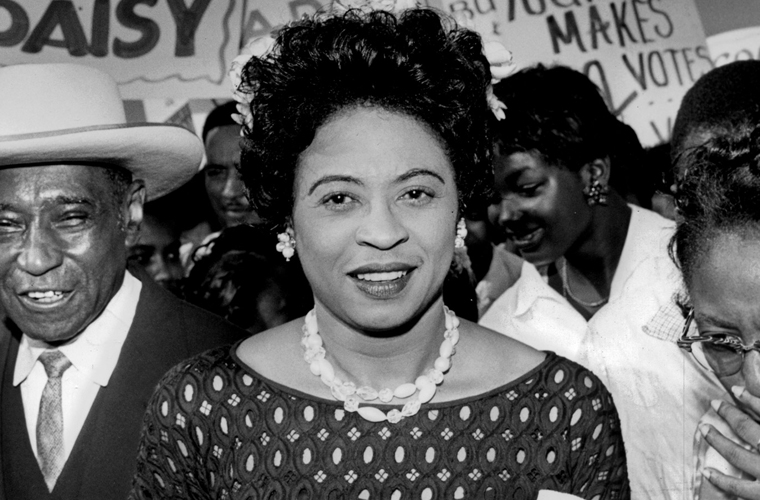 Daisy Bates was an African American civil rights activist and newspaper publisher who documented the battle to end segregation in Arkansas. Daisy Bates was born on November 11, 1914, in Huttig, Arkansas. She married journalist Christopher Bates and they operated a weekly African-American newspaper, the Arkansas State Press. Bates became president of the Arkansas chapter of the NAACP and played a crucial role in the fight against segregation, which she documented in her book The Long Shadow of Little Rock. She died in 1999.

A civil rights activist, writer, publisher. Born Daisy Lee Gatson on November 11, 1914, in Huttig, Arkansas. Bates’s childhood was marked by tragedy. Her mother was sexually assaulted and murdered by three white men and her father left her. She was raised by friends of the family.

As a teenager, Bates met Lucious Christopher “L.C.” Bates, an insurance agent, and an experienced journalist. The couple married in the early 1940s and moved to Little Rock, Arkansas. Together they operated the Arkansas State Press, a weekly African-American newspaper. The paper championed civil rights, and Bates joined in the civil rights movement. She became the president of Arkansas chapter of the National Association for Advancement of Colored People (NAACP) in 1952.

As the head of the NAACP’s Arkansas branch, Bates played a crucial role in the fight against segregation. In 1954, the United States Supreme Court declared that school segregation was unconstitutional in the landmark case known as Brown v. Board of Education. Even after that ruling, African American students who tried to enroll in white schools were turned away in Arkansas. Bates and her husband chronicled this battle in their newspaper.

In 1957, she helped nine African American students to become the first to attend the all-white Central High School in Little Rock, who became known as the Little Rock Nine. The group first tried to go to the school on September 4. A group of angry whites jeered at them as they arrived. The governor, Orval Faubus, opposed school integration and sent members of the Arkansas National Guard to prevent the students from entering the school. Despite the enormous amount of animosity they faced from white residents of the city, the students were undeterred from their mission to attend the school.

Bates’ home became the headquarters for the battle to integrate Central High School and she served as a personal advocate and supporter to the students. President Dwight D. Eisenhower became involved in the conflict and ordered federal troops to go to Little Rock to uphold the law and protect the Little Rock Nine. With U.S. soldiers providing security, the Little Rock Nine left from Bates’ home for their first day of school on September 25, 1957. Bates remained close with the Little Rock Nine, offering her continuing support as they faced harassment and intimidation from people against desegregation.

Bates also received numerous threats, but this would not stop her from her work. The newspaper she and her husband worked on was closed in 1959 because of low adverting revenue. Three years later, her account of the school integration battle was published as The Long Shadow of Little Rock. For a few years, she moved to Washington, D.C., to work for the Democratic National Committee and on antipoverty projects for the Lyndon B. Johnson’s administration.

Bates returned to Little Rock in the mid-1960s and spent much of her time on community programs. After the death of her husband in 1980, she also resuscitated their newspaper for several years, from 1984 to 1988. Bates died on November 4, 1999, Little Rock, Arkansas.

For her career in social activism, Bates received numerous awards, including an honorary degree from the University of Arkansas. She is best remembered as a guiding force behind one of the biggest battles for school integration in the nation’s history.