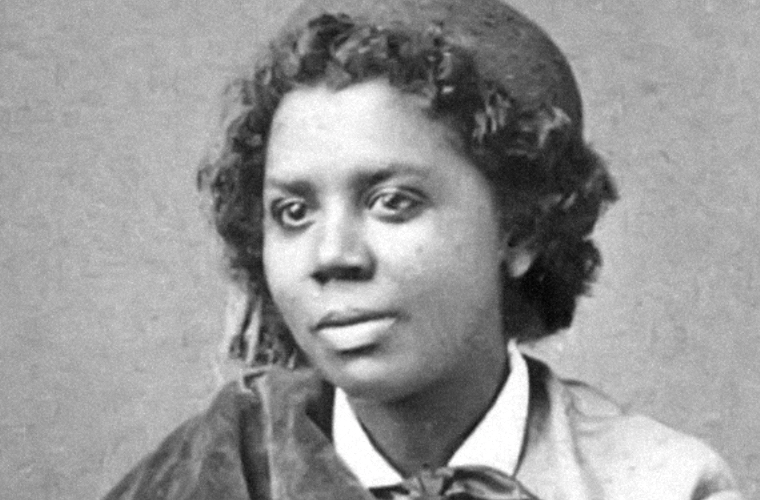 Lewis was the daughter of an African American man and a woman of African and Ojibwa (Chippewa) descent. She was orphaned at a young age and afterward reportedly lived with her maternal aunts among the Ojibwa, who called her Wildfire. With the help of an older brother, she obtained admission to the preparatory department of Oberlin College in 1859, and from 1860 to 1863 she attended the college proper.
Lewis thrived at Oberlin, excelling particularly at drawing, but she left in 1863 after having been accused both of poisoning two of her classmates (in 1862) and of theft (in 1863). A mob beat her severely before her trial for accusations of poisoning; she was later acquitted, with the help of lawyer John Mercer Langston. Again with her brother’s support, she made her way to Boston, where abolitionist William Lloyd Garrison introduced her to a local sculptor, from whom she received a few lessons in modeling.

Lewis’s first work seen publicly was a medallion, advertised for sale early in 1864, that featured the head of militant abolitionist John Brown. Later in the year, her bust of Col. Robert Gould Shaw (a Boston hero who had been killed leading his black troops in the attack on Fort Wagner, part of the assault on Charleston, S.C.) was widely praised. Sales of copies of the bust allowed her to sail in 1865 to Rome, where Charlotte Cushman, Harriet Hosmer, and other members of the American art community took her under their wing. Lewis mastered working in marble and refused to hire Italian stone carvers to transfer her plaster models to marble, in order to quell any question that the work was her own.

Lewis quickly achieved success as a sculptor. Inspired by the Emancipation Proclamation, she carved The Freed Woman and Her Child (1866) and Forever Free (1867). She subsequently turned to Native American themes and created The Marriage of Hiawatha (c. 1868) and The Old Arrow Maker and His Daughter (more than one version), both based on the narrative poem The Song of Hiawatha (1855) by Henry Wadsworth Longfellow, of whom she carved more than one bust. Her other notable works include busts of Garrison (c. 1866) and Abraham Lincoln (c. 1871) and Hygeia (c. 1871), a grave-site statue that was commissioned by Harriot K. Hunt.

Lewis also depicted biblical figures, such as Hagar (more than one version). Her career reached its peak in 1876 when her sculpture The Death of Cleopatra was exhibited at the Philadelphia Centennial Exposition. In 1883 she received her last major commission, a version of the Adoration of the Magi, from a church in Baltimore, Md. It was variously reported that Lewis had last been seen in Rome in 1909 or 1911, but death records discovered in the early 21st century show that she died in London in 1907.