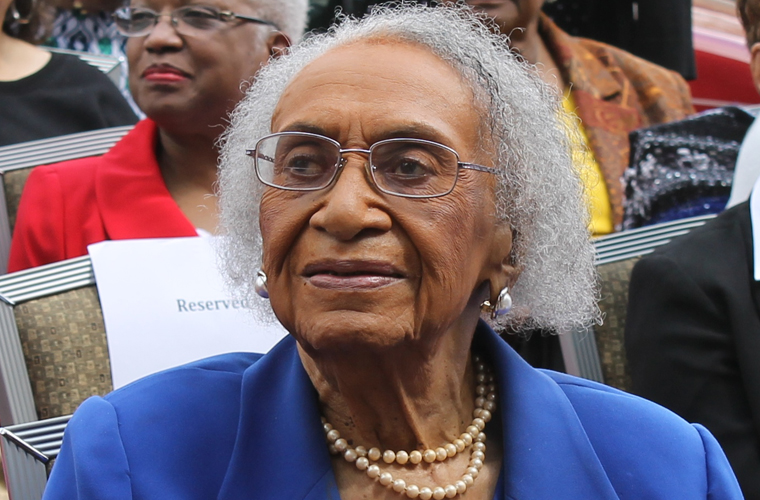 U.S. Civil Rights Commissioner Frankie Freeman was born Marie Frankie Muse on November 24, 1916, in Danville, Virginia. Her parents, Maude Beatrice Smith Muse and William Brown Muse came from college-educated families. Her relatives included Charles Sumner Muse, Edward Muse, and Clarence Muse. Freeman grew up in Danville where she attended Westmoreland School and learned to play the piano. At age sixteen, Freeman enrolled in her mother’s alma mater, Hampton Institute, which she attended between 1933 and 1936. While in New York, Freeman met and married Shelby T. Freeman. In 1944, she was admitted to Howard University Law School where William H. Hastie and Spottswood Robinson were on the faculty. Freeman graduated second in her class in 1947.

Upon graduating from law school, Freeman set up her law offices in the Jefferson Bank Building in June of 1949 and became engaged in the Civil Rights Movement. Freeman was a part of an NAACP legal brain trust, which included Sidney Redmond, Robert Witherspoon, and Henry Espy in the NAACP’s 1949 Brewton v. the Board of Education of St. Louis, following the case to victory in the Supreme Court of the State of Missouri. In 1954, the same year as Brown v. the Board of Education, Freeman was the lead attorney for the landmark NAACP case Davis et al v. the St. Louis Housing Authority, which ended legal racial discrimination in public housing. In 1955, Freeman became the first associate general counsel of the St. Louis Housing Authority and Land Clearance Authority.

In 1958, she became a charter member of the Missouri advisory committee to the U.S. Commission on Civil Rights. Freeman provided NAACP counsel to CORE activists demonstrating against hiring discrimination policies at Jefferson Bank. In March of 1964, she was appointed by President Lyndon Johnson as the first female member of the U.S. Commission on Civil Rights. Freeman served as a commissioner for sixteen years, and later as Inspector General for the Community Services Administration during the Carter Administration. Freeman was also a municipal court judge in the early 1970s. In 1982, Freeman helped form a bipartisan Citizens Commission on Civil Rights to monitor the federal government’s enforcement of laws barring discrimination. Freeman was a practicing attorney for more than fifty years.

Freeman was a Trustee Emeritus of the Board of Trustees of Howard University, past Chairman of the Board of Directors of the National Council on Aging, Inc., and the Urban League of Metropolitan St. Louis. She was also a board member of the United Way of Greater St. Louis, the Metropolitan Zoological Park and Museum District, and the St. Louis Center for International Relations. She was the author of A Song of Faith and Hope: The Life of Frankie Muse Freeman and past national president of Delta Sigma Theta Sorority, Inc. Freeman also received several honorary doctorate degrees from institutions that include Hampton University, Washington University, and Howard University. She was inducted into the National Bar Association’s Hall of Fame in 1990.