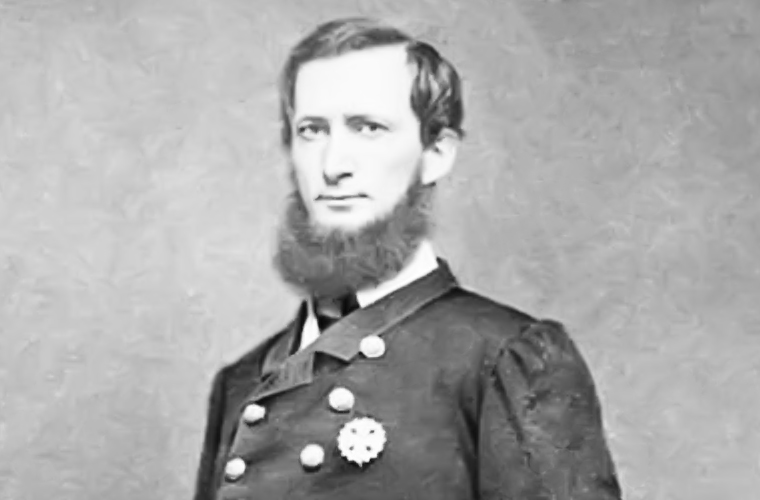 George Washington Lafayette Bickley (c. 1819 – August 1867) was the founder of the Knights of the Golden Circle, a Civil War-era secret society used to promote the interests of the Southern United States by preparing the way for annexation of a “golden circle” of territories in Mexico, Central America, and the Caribbean which would be included into the United States as southern or slave states. Bickley was arrested by the United States government and it was during this time he wrote a letter to Abraham Lincoln expressing his distastes with Lincoln’s handling of the government.

Bickley was born in southwest Virginia in 1819. At a young age, he ran away from home to live an adventurous life around the country. In 1850, he resurfaced in Jeffersonville (now Tazewell), Virginia as a practicing physician. In Jeffersonville, he founded a local historical society and began writing the manuscript for the History of the Settlement and Indian War of Tazewell County, Virginia. In 1851, he moved to Cincinnati, Ohio, after being offered to serve as “Professor of Materia Medica, Therapeutics, and Medical Botany” at the Eclectic Medical Institute, an institution teaching a form of alternative medicine known as eclectic medicine.

Bickley had secured the offer by claiming to have been a graduate in the Class of 1842 of the University of London. Bickley stated that he had studied medicine under the renowned English physician John Elliotson, who supposedly had signed his diploma. The University of London failed to find Bickley’s name in their records for the list of university graduates. Furthermore, Elliotson had resigned from the university in 1838, which would falsify Bickley’s claim. In 1853, Bickley published Adalaska; Or, The Strange and Mysterious Family of the Cave of Genreva, a fictional work based on the premise of the Young America movement and Manifest Destiny, and the Principles of Scientific Botany

Hounded by creditors, Bickley left Cincinnati in the late 1850s and traveled through the East and South promoting an expedition to seize Mexico and establish a new territory for slavery. He found his greatest support in Texas and managed within a short time to organize thirty-two chapters there. In the spring of 1860, the group made the first of two attempts to invade Mexico from Texas. A small band reached the Rio Grande, but Bickley failed to show up with a large force he claimed he was assembling in New Orleans, and the campaign dissolved.

In April some KGC members in New Orleans, disgusted by Bickley’s inept leadership, met and expelled him, but Bickley called a convention in Raleigh, North Carolina, in May and succeeded in having himself reinstated. Bickley attempted to mount a second expedition to Mexico later in the year, but with Abraham Lincoln’s election, he and most of his supporters turned their attention to the secessionist movement.

The outbreak of the Civil War prompted a shift in the group’s aims to that of supporting the Confederates and engaging in Copperhead activity. In late [1863 the Knights of the Golden Circle was reorganized (sans Bickley) as the Order of American Knights and again, early in 1864, as the Order of the Sons of Liberty, with Clement Vallandigham, the most prominent of the Copperheads, as its supreme commander but with growing Union victories in 1864, it soon dissolved. Bickley served for a time as a Confederate surgeon and was arrested for spying in Indiana in July 1863. He was never tried but remained under arrest until October 1865; broken and dispirited, he died in August 1867.