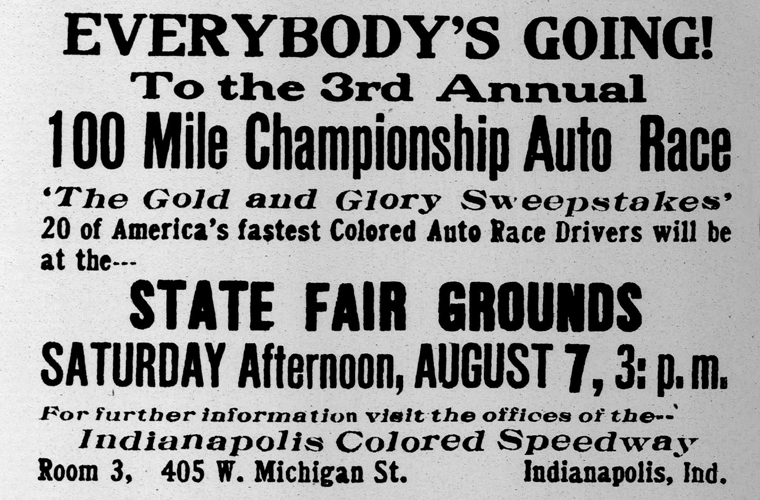 From 1924 to 1936, the Midwest’s best and brightest black drivers and mechanics competed in what became known as the Gold and Glory Sweepstakes. Here, we take a look at this important yet nearly forgotten auto-race that altered the course of history for America’s black mechanics and drivers.

Running in the shadow of the vaunted, whites-only world that was the Indianapolis Speedway prior to the Great Depression, the Gold and Glory Sweepstakes was the first major auto-race to afford black drivers the chance to test their mettle and mechanical know-how. A showcase for speed and unique mechanical innovation, the Gold and Glory Sweepstakes became an important stepping stone for black racers who would eventually find their way into the Indy-car circuit courtesy of those white drivers and spectators who saw not color but pure racing talent as the only qualification.

After multiple rebukes by the American Automobile Association (the sport’s governing body), the Colored Speedway Association (CSA) established the Gold and Glory Sweepstakes in Indianapolis, Indiana 1924—a time when strict segregation was the law of the land.

Throughout the country, it was rare that blacks and whites comingled with any sort of regularity. Yet throughout the whole of Indianapolis, there existed an overwhelming, color-blind pride in the city’s status as the auto racing capital of the United States. Defying color lines, auto racing appealed to both white and black audiences, often resulting in the coming together of disparate communities over a shared love of speed and bravery behind the wheel.

The sweepstakes’ biggest name was, without a doubt, Charlie Wiggins who won the Gold and Glory Sweepstakes a record four times between 1926 and 1935 before being forced to retire from racing following a horrific accident during the 1936 running of the event.

Dubbed the “Negro Speed King” by the then predominately white press, Wiggins was the sport’s most revered participant, known for unprecedented prowess behind the wheel and under the hood. His talents ultimately earned him the respect and admiration of drivers, both black and white.

While more and more sports were desegregated in the Post-war years following Jackie Robinson’s landmark breaking of baseball’s color barrier, auto racing became something of an afterthought, the Gold and Glory Sweepstakes and its kings of the dirt-track slowly faded into the pages of history.

Like so many organizations, the CSA could not survive the economic turmoil that was the Great Depression. A number of financial scandals involving unscrupulous race promoters and a vanishing financial infrastructure hurt the CSA. On top of that, several of its biggest names were forced out of the sport as a result of injuries sustained during the circuit’s final racing season. The CSA shut its doors in late 1936, taking the legacy of the Gold and Glory Sweepstakes along with it.