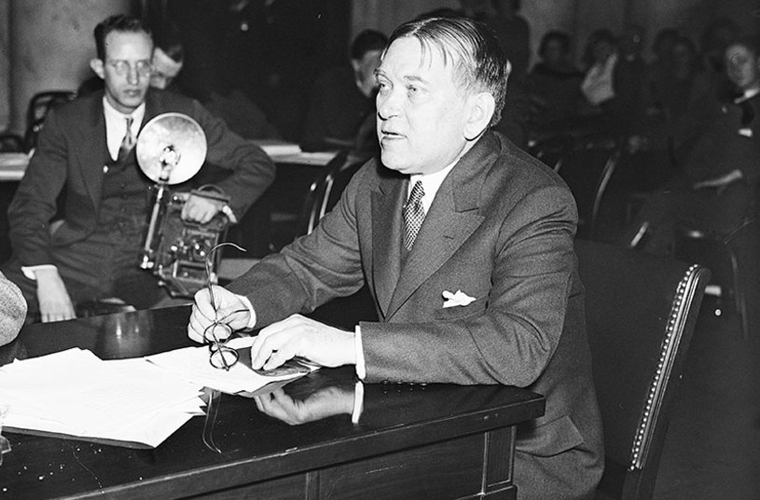 While I like and even admire H.L Mencken, I do not respect him. Nor do I understand the often hysterical admiration he receives in certain quarters. He wrote well and possessed an independent mind, but his poor character often led him astray, for he took so much pleasure in contradicting conventional opinions that his contrariness often won out over the desire for truth and understanding. Like many autodidacts, Mencken had a towering contempt for what he did not understand, and he possessed more wit than learning; moreover, his autodidact’s superiority complex led him to conceive of himself as sharply separated from society, at which he could only sneer, and it pleased him to sneer a great deal. But for all that, Mencken was an intelligent man, and his writings are often worthwhile.

Mencken’s views on race were complex. He enjoyed sneering at white America far more than black, and his assertions that the KKK was typically American will endear him to those who assert that American society is pervasively racist. On the other hand, Mencken’s insistence that everyone and everything be open to criticism distances him from modern “anti-racist” discourse.

The tendency of negroes to avoid criticism was something of a theme for Mencken. In The Negro as Author he criticized the tendency where racial matters were concerned to write apologetics for rather than hard-headed critiques:

Another somewhat defective contribution to negro literature, this time by a white author, is The Negro Faces America, by Herbert Seligman. The author’s aim is, first, to rehearse the difficulties confronting the emerging negro of the United States, particularly in the South, and, secondly, to expose the shallowness and inaccuracy of some of the current notions regarding negro capacities and negro character. Most of this balderdash, of course, originate in the South, where gross ignorance of the actual negro of today is combined with a great cocksureness. But all of the prevailing generalizations, even in the South, are not dubious, and Mr. Seligmann weakens his case when he hints that they are. For example, there is the generalization that the average negro is unreliable, that he has a rather lame sense of the sacredness of contract, that it is impossible to count upon him doing what he freely promises to do. This unreliability, it seems to me, is responsible for a great deal of the race feeling that smolders in the South. The white man is forced to deal with negroes daily, and it irritates him constantly to find them so undependable. True enough, it is easy to prove that this failing is not met within negroes of the upper classes, and it may be even argued plausibly that it is not intrinsically a negro character–that the pure and undebauched African is a model of honor. But the fact remains that the Southern whites have to deal with the actual negroes before them, and not with a theoretical race of African kings. These actual negroes show defects that are very real and very serious. The leaders of the race, engrossed by the almost unbearable injustices that it faces, are apt to forget them. here is a chance for its white friends to do it a genuine service. What it needs most, of course, is a fair chance in the world, a square deal in its effort to rise, but what it needs after that is honest and relentless criticism. This criticism is absent from Mr. Seligmann’s book. the negro he depicts is an innocent who never was on land or sea.

Freeing blacks from criticism has not made the people better disposed towards them any more than feminism made men better disposer towards women. On the contrary:

The more noisy Negro leaders, by depicting all whites as natural and implacable enemies to their race, have done it a great disservice. Large numbers of whites who were formerly very friendly to it, and willing to go great lengths to help it, are now resentful and suspicious. The effort to purge the movies, the stage, the radio, and the comic-strips of the old-time Negro types have worked the same evil. The Negro comic character may have engendered a certain amount of amiable disdain among whites, but he certainly did not produce dislike. We do not hate people we laugh at and with. His chief effect upon white thinking, in fact, was to spread the idea that Negroes as a class are very amiable folk, with a great deal of pawky shrewdness. This was to their advantage in race relations. But when the last Amos ‘n’ Andy program is suppressed the Negro, ceasing to be a charming clown, will become a menacing stranger, and his lot will be a good deal less comfortable than it used to be. ––Minority Report: H.L. Mencken’s Notebooks, 1956 section 232.

This is a thousand times truer today than it was then. White guilt and masochism have been manipulated to a truly remarkable extent, but the game is nearing its end.

Mencken defended traditional freedom of association, including restrictive covenants, against the charge that they violated anyone’s rights, and insisted that Americans must be free to associate with whomever they wish, and likewise free not to associate.

The more vocal and ambitious American Negroes talk constantly of their desire for all the common rights of the American Caucasian, but what they really have in mind, in most cases, is privileges––for example, his privilege of going at will into any society or environment that attracts him… What they forget is that color is the crassest and inescapable of all differentiations. The Caucasian is aware of it the moment one of them appears, and whether consciously or unconsciously it annoys him as an invasion of his natural human preference for his own kind. ––Minority Report: H.L. Mencken’s Notebooks, 1956 section 110.

His shallow contrarian nature, and in particular his intense dislike for Anglo-Saxons and American customs in general, led Mencken to some ill-considered statements about race. For example, a desire to tweak the noses of “puritan” Anglo-Saxons led him to write that

That Negroes, in more than one way, are superior to most American whites is something that I have long believed. I pass over their gift for music (which is largely imaginary) and their greater dignity (which Dr. Eleanor R. Wembridge has described more eloquently than I could do it), and point to their better behavior as members of our common society. Are they, on the lower levels, somewhat turbulent and inclined to petty crime? Perhaps. But that crime is seldom anti-social… Professional criminals are rare among Negroes, and, what is more important, professional reformers are still rarer. The horrible appetite of the low-caste Anglo-Saxon to police and harass his fellow-men is practically non-existent among them. No one ever hears of Negro wowsers inventing new categories of crime, and proposing to jail thousands of their own people for committing them. Negro Prohibitionists are almost as rare as Catholic Prohibitionists. No Negro has ever got a name by pretending to be more virtuous than the rest of us. In brief, the race is marked by extraordinary decency. ––”The Burden of Credulity,” February 1931.

Certainly, his claims about crime have nothing to do with contemporary facts. From what I understand, they are not supported by the historical facts either.

Similarly, while Mencken’s beliefs on human biodiversity were out of synch with his egalitarian times, they were not particularly well informed. In particular, he clung stubbornly to his belief in biological castes, which he had taken from his (rather crude) reading of Nietzsche. The following is typical:

The theory that all the races of mankind have descended from one stock is whooped up assiduously by the prophets of egalitarianism, but there is really no support for it in the known facts. On the contrary, there is every evidence that man emerged from the primordial apes in two or three or even four or five distinct races, and that they survive more or less to this day, despite the wholesale intermingling that has gone on in civilized countries. In many of the isolated backwater of Europe––and of America too, as Appalachia witnesses––the traces of Neanderthal Man are much more evident than those of Cro-Magnon Man, who was vastly his superior. In any chance crowd of Southern Negroes one is bound to note individuals who resemble apes quite as much as they resemble Modern Man, and among the inferior tribes of Africa, say the Bushmen, they are predominant. The same thing is true of any chance crowd of Southern poor whites. It offers individuals so plainly inferior to the common run of Americans that it is hard to imagine them descending wholly from the same stock. ––Minority Report: H.L. Mencken’s Notebooks, 1956 section 379.

Such remarks are the enemy of real race realism, and fully deserve the environmentalist rebuttal which they are sure to receive.

Update Required To play the media you will need to either update your browser to a recent version or update your Flash plugin.
previous post