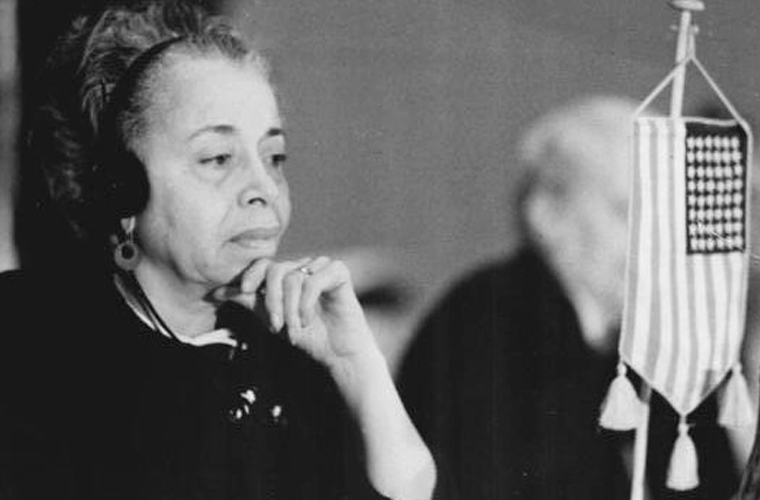 American activist Louise Alone Thompson Patterson (1901-1999) participated in the Harlem Renaissance of the 1920s and 1930s, was a close friend of some of its leading literary figures and spent her life involved in civil rights and other political causes. “She was a leader, an organizer, a humane person who felt deeply about these causes and never wavered in her humane outlook,” historian Faith Berry, who knew Patterson, told Elaine Woo of the Los Angeles Times.

Born Louise Alone Toles in Chicago, Illinois, on September 9, 1901, Patterson was the daughter of bartender William Toles and Lula Brown Toles. After her parents separated, she grew up in the Pacific Northwest with her mother and William Thompson, her stepfather. Patterson adopted her stepfather’s last name and was known as Louise Thompson until she married in 1940. She suffered from severe racism while living in towns with no other black children, and channeled her energies into her schoolwork. In 1919 she began studying at the University of California at Berkeley, where she was one of only a few black students.

At Berkeley, Patterson attended a lecture by W.E.B. DuBois, the founder of the National Association for the Advancement of Colored People. DuBois’s talk inspired her. “For the first time in my life, I was proud to be black,” she said, as quoted by Erik McDuffie in an American National Biography entry. After graduating from Berkeley in 1923 with a degree in economics, she briefly returned to Chicago to work as a secretary and pursue graduate studies at the University of Chicago. Soon she began teaching black students, first at a school in Pine Bluff, Arkansas, then at Hampton Institute in Virginia, the alma mater of black activist Booker T. Washington. She lost her job there after supporting a student strike protesting the mostly white administration’s policies, which included having the students sing plantation songs to white visitors on Sundays. She also wrote an anonymous letter about the conditions at Hampton to DuBois, who printed it in his publication, Crisis.

Patterson had long aspired to move to New York City, and even before she did so, she began befriending key figures of the Harlem Renaissance, the literary, artistic, and political movement among black intellectuals centered in New York’s Harlem neighborhood. In March of 1928, before Patterson left Hampton, Langston Hughes, one of the Harlem Renaissance’s most celebrated writers, gave a poetry reading on campus. He and Patterson struck up a friendship there that would last for decades.

In June of 1928, Patterson moved to New York City to study at the New School for Social Research, supported by an Urban League scholarship, and worked for the Urban League in the city as a social worker. Disappointed with what she considered a paternalistic attitude in social work, she eventually left the job. Patterson married the Harlem writer Wallace Thurman in 1928, although they separated after only six months. “I never understood Wallace,” Patterson later told Arnold Rampersad, as quoted in his biography The Life of Langston Hughes. “He took nothing seriously. He laughed about everything. He would often threaten to commit suicide but you knew he would never try it.” Most of his friends believed Thurman was gay, but Patterson told Rampersad, “He would never admit that he was a homosexual. Never, never, not to me at any rate.”

In the fall of 1929, Patterson took a job as secretary to Hughes. She was actually hired by Charlotte Mason, the white patron of Hughes and writer Zora Neale Hurston. Mason later asked Patterson to work as Hurston’s secretary as well. Her job soon came to include transcribing a folk comedy Hughes and Hurston were co-writing in 1930, Mule Bone. But the two authors had a falling out, partly over authorship—Hurston attempted to rewrite the play and pass it off as hers alone—and partly over how to pay Patterson for her work. In the process, Hurston became envious of Patterson’s closeness to Hughes, even suspecting them of having a romantic relationship, which both strongly denied. The play, never finished, was not performed until 1991.

Meanwhile, in 1930 Mason abruptly terminated her financial relationships with both Hughes and Patterson. She was angry that Hughes had traveled to Washington, D.C., instead of writing, defying Mason’s wishes. Patterson, who had liked Mason at first, was shocked and disillusioned. “The way she talked to Langston is the way a woman talks when she’s keeping a pimp,” she complained, according to Rampersad. “ ‘I bought you those clothes you are wearing! I took care of you! I gave you this! I gave you that!’ ” According to Rampersad, the experience led Patterson to “hate the power of money,” the thought “that someone because they have money can do to you as they wish and talk to you as they want to. How dare they!” The sting of Mason’s controlling patronage pushed both Patterson and Hughes toward more radical politics.

Like many intellectuals in 1930s America, Patterson became sympathetic to socialism and Communism, seeing radical politics as the solution to the Great Depression’s poverty, and Communists as rare allies in the fight against American racism. Unlike many of her peers, Thompson remained dedicated to Communist ideas her whole life. She founded the Harlem branch of the Friends of the Soviet Union in the early 1930s and, after the bad experience with Mason, formed an intellectual salon called the Vanguard as an alternative to some Harlem Renaissance figures’ dependence on rich patrons. She held Vanguard events in her apartment, including concerts, dances, and Marxist discussions.

In 1932 Patterson organized a trip to the Soviet Union by 22 black American artists and writers, to make a film about racism in the United States, titled Black and White. The film was canceled after they arrived, for reasons that remain in dispute: perhaps because the Soviet film company mismanaged the project; because the Americans rejected the script on the grounds that its Soviet writers did not really understand the United States; or because the Soviet government did not want to hurt its relations with the U.S. government. Despite the project’s failure, Patterson remained impressed by Soviet citizens’ apparent lack of racism and willingness to demonstrate their respect for black American visitors. “The Russians would push us to the front of the queue line for a bus or ticket, or offer us seats in a crowded streetcar,” she later recounted in an essay, quoted by Richard Goldstein of the New York Times. “For all of us who experienced discrimination based on color in our own land, it was strange to find our color a badge of honor, our key to the city, so to speak.” However, many others on the trip grew distrustful of the Soviets and felt Patterson trusted them too much. They and other critics began calling her “Madame Moscow.”

Undaunted, Patterson joined black and Communist efforts to free the Scottsboro boys, nine black teens wrongly convicted of rape in Scottsboro, Alabama, and facing death sentences. In 1933 she organized a march in Washington, D.C., to support the Scottsboro defendants. She officially joined the Communist Party in 1933, studied Marxism at the party’s Workers’ School, and joined the Communist-affiliated International Workers Order in 1934; she was later named its national secretary. In 1937 she traveled to France for the World Congress Against Racism and Fascism and to Spain as part of a relief delegation supporting the Republican side of the Spanish Civil War. While there, she visited her friend Hughes, who was in Spain to attend the radical International Writers’ Congress and write foreign dispatches for black newspapers in the United States.

Once Patterson and Hughes returned from Spain, Hughes felt compelled to blend his love of the theater with radical activism. He turned to Patterson for help, since the powerful IWO, with 145,000 members, was sponsoring many cultural programs. “Langston was at my apartment at 530 Manhattan Avenue one rainy night just after he got back from Spain,” Patterson recalled to Rampersad. “ ‘I want a theater, Louise,’ Langston told me. ‘I’m determined to have one of my own. He was very, very serious, and so I said I would try to help.” Patterson and Hughes founded the Harlem Suitcase Theater, a “people’s theater” that featured community actors. At Patterson’s suggestion, Hughes linked several of his politically minded poems together with blues and spiritual music in a play, Don’t You Want to Be Free? The lead role went to Robert Earl Jones, father of the famed actor James Earl Jones. Later, Hughes dedicated Shakespeare in Harlem, his 1942 book of poems, to Patterson.

In 1940 Patterson married William Patterson, an American Communist Party leader. The couple was longtime friends; they had met at an NAACP meeting in Oakland, California, in 1919. He had helped defend the Scottsboro boys, and in 1946 he founded the Civil Rights Congress, which presented a petition to the United Nations accusing the United States of genocide against blacks.

The Pattersons settled in Chicago, where they had a daughter, Mary Louise Patterson, in 1943. The couple helped found a black cultural center on Chicago’s South Side and the Abraham Lincoln Worker’s School in Chicago, which operated for three years. During the anti-Communist Red Scare of the early 1950s, U.S. Senator Joseph McCarthy had William Patterson jailed for contempt of Congress when he refused to name the supporters of the Civil Rights Congress.

Patterson was also a friend to the pioneering black singer and actor Paul Robeson, whose leftist political beliefs attracted severe hostility during the anti-Communist McCarthy era of the 1940s and 1950s. In 1949 demonstrators caused a riot at a Robeson concert in Peekskill, New York. To keep such demonstrations from ruining Robeson’s career and political efforts, Patterson organized a national tour of black communities for Robeson.

Patterson helped create several activist organizations during her long life. She co-founded the anti-colonial Council of African Affairs with her husband and W.E.B. DuBois in the late 1940s; Sojourners for Truth and Justice, a black women’s civil rights group, in 1951; and the American Institute for Marxist Studies, with historian Herbert Aptheker, in the 1960s. In 1970 she headed the New York Committee to Free Angela Davis, the black activist accused of being involved in the murder of a California judge.

Patterson became a key source of information for Langston Hughes’s biographers Faith Berry and Arnold Rampersad and for Zora Neale Hurston’s biographer Valerie Boyd. She began writing her own memoirs in the late 1980s along with Margaret Wilkerson, but she never completed them, due to failing health in the mid-1990s. The unfinished manuscript is now part of her personal papers at Emory University in Atlanta.

Patterson moved into the Amsterdam Nursing Home in Manhattan in 1997. She died there on August 27, 1999, at age 97. She is survived by her daughter and two granddaughters.