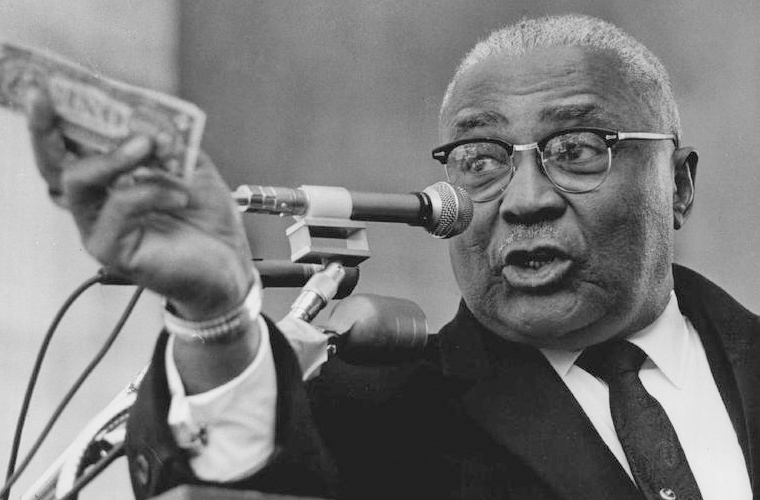 The grandson of slaves, the son of illiterate sharecroppers, Martin Luther King, Sr, who was known as “Daddy,” was a pastor for 44 years of a great Atlanta church, and through his steadfast courage in the face of segregation and discrimination, a source of inspiration to his eldest child.

Beyond that, Mr. King’s refusal to succumb to bitterness in the face of the tragedies that afflicted him and his family won the respect and admiration of millions throughout the nation and appeared to endow him with a biblical dimension.

Dr. Martin Luther King Jr. was assassinated in Memphis in April 1968. The next year Mr. King’s other son, the Rev. Adam Daniel King, drowned in a swimming accident. In 1974, Mr. King’s wife was shot and killed while playing the organ at a Sunday morning service.

Born in a shack in Stockbridge, Ga., Dec. 19, 1899, Mr. King saw tragedy and lived to know triumph. By age 15 he had seen a black man lynched and had himself been kicked and bloodied by a white mill owner.

Recognizing the realities of racism, he left his family home in his midteens and walked the 20 miles to Atlanta and greater, although still severely restricted, opportunity. He shoveled coal on a locomotive and held factory and other blue-collar jobs before turning to preaching.

He met and later married Alberta Williams, the daughter of the then-pastor of the Ebenezer Baptist Church, one of the nation’s black landmarks. In 1931, after working his way through college, Mr. King became pastor of Ebenezer.

Through the years in which legally sanctioned discrimination restricted the lives of blacks, Atlanta appeared to be a center of some progress and moderation.

In all the painfully achieved advances, such as integration of elevators in the courthouse, establishment of equal pay for black teachers, desegregation in 1959 of the bus system, Mr. King, vigorous, forceful, often crusty or hot-tempered, was credited with playing some part.

Meanwhile, his children received all the advantages he could provide and the lesson of his example.

Martin Luther King Jr. liked, in particular, to tell of the day in the 1930s on which they were downtown and encountered a policeman who called Mr. King Sr. a boy.

The elder King pointed to his son, who was then about 10. “This is a boy, here,” he told the officer. “I am a man.” It was one of many incidents in which the younger King was made aware of his father’s courage.

In time, the movement in which the elder King had worked for patient decades grew irresistible. Mr. King saw his son win the Nobel Prize. Rights that had been sought for years were granted in a day.

The 1976 Democratic National Convention nominated Jimmy Carter, another Georgia native, for the presidency. Mr. King was credited with playing a key role in delivering the black vote in the primaries. To thousands in the convention hall, to millions watching on television, Mr. King’s full-throated benediction seemed a memorable symbol of national redemption and reconciliation.

Mr. King delivered the benediction at the 1980 convention as well and saw his son’s birthday made a national holiday last year.

Survivors include a daughter, Christine King Farris, and 10 grandchildren.