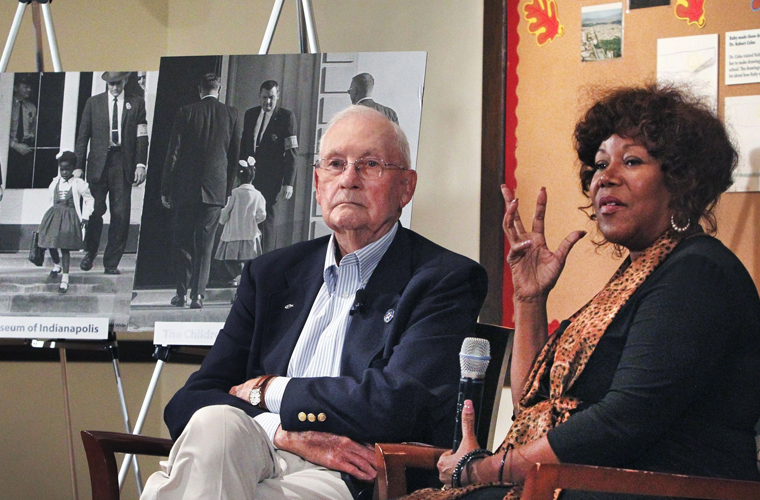 On the road to Civil Rights, even children became public figures, such as six-year-old Ruby Bridges, who integrated an all-white elementary school in New Orleans on November 14, 1960. Ruby was born in Tylertown, Mississippi, to Abon and Lucille Bridges. When she was 4 years old, her parents, Abon and Lucille Bridges, moved to New Orleans, hoping for a better life in a bigger city. Her father got a job as a gas station attendant and her mother took night jobs to help support their growing family.

The fact that Ruby Bridges was born the same year that the Supreme Court’s Brown v. Board of Education decision desegregated the schools is a notable coincidence in her early journey into civil rights activism. When Ruby was in kindergarten, she was one of many African-American students in New Orleans who was chosen to take a test determining whether or not she could attend a white school. It is said the test was written to be especially difficult so that students would have a hard time passing. The idea was that if all the African-American children failed the test, New Orleans schools might be able to stay segregated for a while longer. Ruby lived a mere five blocks from an all-white school, but attended kindergarten several miles away, at an all-black segregated school.

Bridges were one of six black children in New Orleans to pass this test. On the morning of November 14, 1960, federal marshals drove Ruby and her mother five blocks to her new school. While in the car, one of the men explained that when they arrived at the school, two marshals would walk in front of Ruby, and two would be behind her. The image of this small black girl being escorted to school by four large white men inspired Norman Rockwell to create the painting “The Problem We All Must Live With“, which graced the cover of Look magazine in 1964.

As soon as Bridges entered the school, white parents pulled their own children out; all the teachers refused to teach while a black child was enrolled. Only one person agreed to teach Ruby and that was Barbara Henry, from Boston, Massachusetts, and for over a year Henry taught her alone, “as if she were teaching a whole class”.

That first day, Bridges and her adult companions spent the entire day in the principal’s office; the chaos of the school prevented their moving to the classroom until the second day. On the second day, however, a white student broke the boycott and entered the school when a 34-year-old Methodist minister, Lloyd Anderson Foreman, walked his 5-year-old daughter Pam through the angry mob, saying, “I simply want the privilege of taking my child to school…”.

A few days later, other white parents began bringing their children, and the protests began to subside. Every morning, as Bridges walked to school, one woman would threaten to poison her; because of this, the U.S. Marshals dispatched by President Eisenhower, who was overseeing her safety, allowed Ruby to eat only the food that she brought from home.

The Bridges family suffered for their decision to send her to William Frantz Elementary: her father lost his job, the grocery store the family shopped at would no longer let them shop there, and her grandparents, who were sharecroppers in Mississippi, were turned off their land. She has noted that many others in the community, both black and white, showed support in a variety of ways. Some white families continued to send their children to Frantz despite the protests, a neighbor provided her father with a new job, and local people babysat, watched the house as protectors, and walked behind the federal marshals’ car on the trips to school.

Ruby graduated from a desegregated high school, became a travel agent, married, and had four sons. She was reunited with her first teacher, Henry, in the mid-1990s, and for a time the pair did speaking engagements together. Ruby later wrote about her early experiences in two books and received the Carter G. Woodson Book Award. A lifelong activist for racial equality, in 1999, Ruby established The Ruby Bridges Foundation to promote tolerance and create change through education. In 2000, she was made an honorary deputy marshal in a ceremony in Washington, D.C.