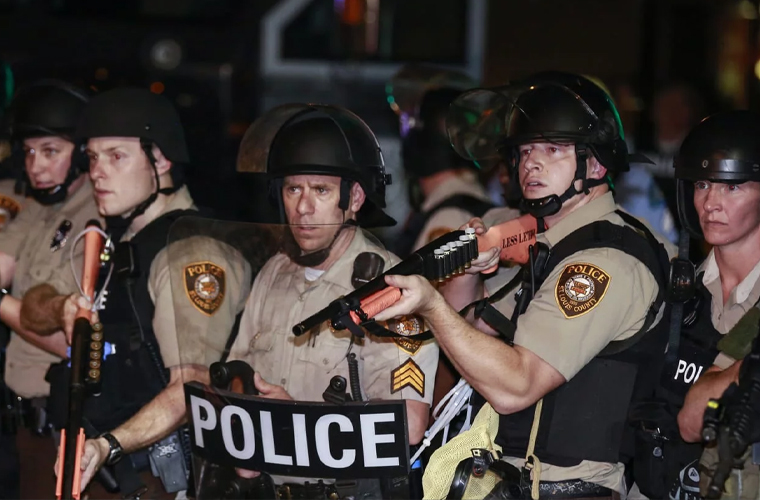 Sunday, September 9, 1739: the scene in Stono, South Carolina was a white man’s nightmare come true.
Armed with knives and guns and drunk, 60 slaves set out for freedom in Florida, singing, dancing and brutally murdering more than two dozen whites along the way.

Known now as the Stono Rebellion, the revolt was the first major rebellion by slaves in South Carolina and the deadliest one on American soil in the 18th Century.

While whites held the power in the slave-owning South, by the late 1700s they were beginning to be vastly outnumbered by slaves, brought over by the boatload to make plantations profitable. Rather than reveling in dominion over their subjects, white South Carolinians were paranoid, fearing for their lives as blacks began to outnumber them almost two to one. The Stono Rebellion brought the point home.

In response to the Stono incident, South Carolina became the first of the three slave-owning states to adopt a comprehensive slave code. The new code officially established slave patrols or “paddy rollers,” groups of white men charged through civic duty to keep slaves down and keep revolts from happening. They’re the subject of the new book Slave Patrols (Harvard University Press) by Florida State historian Sally Hadden (Ph.D. Harvard), which studies the roots, rules, procedures, progress, disintegration, and legacy of Southern slave patrols in Virginia and the Carolinas in the 18th and 19th centuries. It is perhaps the most all-encompassing view yet of a long-overlooked chapter of Southern history.

The paucity of research done on slave patrols is seemingly out of proportion to the large role they played in the perpetuation of the slavery system in the South. Every slave-owning state had active, established patrols and, though they had many functions within the community, they had one basic job—to act as the first line of defense against a slave rebellion. They caught runaway slaves, enforced slave codes, discouraged any large gathering of blacks and generally perpetuated the atmosphere of fear that kept the slaves in line.

In other words, this is no Steel Magnolias. Hollywood filmmakers wouldn’t recognize the insecure, hostile South of 1740, where slave patrols amounted to, in Hadden’s words, “an unequivocal manifestation of white fear.”

“Paranoia is part of the concern that drives the formation of slave patrols and part of the reason why you’d hear so many stories of revolts,” Hadden said. “It’s an idea that originated with (historian) Stephen Channing, and it’s one of the ideas that I believe is accurate about that world.”

Hadden effectively traces that paranoia and hostility as it turns to bitterness in the aftermath of the Civil War, after the patrols had been legally disbanded yet turned into something even darker.

“The seemingly unrestricted brutality of patrols would find its mirror image during Reconstruction in the extralegal activities of vigilante groups that operated outside virtually all social restrictions,” Hadden writes. “White Southerners visited retribution upon freedmen who had little means of protecting themselves from the next incarnation of slave patrols: the Ku Klux Klan.”

While there are no doubts that the slave patrols led directly to the Klan and other brutal vigilante groups, Hadden is uncomfortable offering the practices of slave patrols as the sole explanation for current tensions between police and the black community.

“When I talk about slave patrollers, I always hear, ‘So this is about the origins of white-on-black violence, right, like Rodney King getting beaten in L.A.?’” Hadden said. “Some people will read this with an eye towards what it says about the 21st century, but what I make very clear is that, while we still have racial problems, the patrols are just the origins, not the answers. My purpose was to locate the historical roots of Southern law enforcement and race-based violence.”

Others are more at ease with the connection. In a Chicago Tribune editorial from 2000, writer Salim Muwakkil drew a line directly from slave patrols to Amadou Diallo, the unarmed African immigrant fired on 41 times by police.

“Complexion has influenced the focus of law enforcement from this nation’s very beginnings; the first organized police forces, according to police historian William Geller, were the varied slave patrols,” Muwakkil wrote. “Policing in this country has always had the dual purpose of maintaining social order and enforcing the racial hierarchy.”

Hadden prefers to let history speak for itself, rather than push it towards any moralizing end. She’s wary of the so-called “Goldhagen Thesis,” she says, a reference to Daniel Goldhagen’s book, Hitler’s Willing Executioners (Vintage, 1997). Goldhagen, a Harvard historian, argues that under extraordinary circumstances, individuals have no independent will to act freely and are just manipulated by larger historical forces.

“That book is about how ordinary Germans were drawn into the exterminating process, and Goldhagen takes that extra step to say that it’s a predisposition of the Germans going way back in history,” Hadden said. “Flash forward to what I’m working on, and one of the things about Goldhagen’s thesis is that it denies free will, which I won’t do. We inherit a culture that has racism, ageism, and sexism, but I never want to deny the capacity of free will.”

Hadden, a lifelong student of Southern history, first stumbled upon a reference to “paddy rollers” while in graduate school. She found a curious passage in historian Edward Ayers’ acclaimed Vengeance and Justice: Crime and Punishment in the Nineteenth-Century American South. It didn’t sound familiar but seemed like it should.

“He had a paragraph or two talking about slave patrollers and I was really struck by it,” Hadden recalled recently. “Because I grew up in the South, I was born here, I’m very interested in Southern history, I’ve read many books about slavery…but I’d never heard about slave patrols before.”

Her curiosity piqued, Hadden went looking for more material on the patrols. She met with disappointing results.

“I kept finding the same sentence from Ayers, the same paragraph recrafted and rephrased. Nobody had anything more than a sentence to say about the patrols. There were very little background and almost no context.”

Slave patrols were populated in the beginning by people from all walks of life in the South, from wealthy land- and slave-owning aristocrats on down. Service in the patrols was required by law and refusal to perform patrol duty met with stiff fines. As such, Hadden writes, “Historians have routinely assumed that since patrollers did not stop every runaway, it matters little what patrols did; their uneven enforcement of the law must have diminished their impact on Southern history and slavery. As a result, the number of prominent slave histories that fail to mention even the existence of patrollers is startling. And when histories do include them, patrollers generally appear as little more than straw men, paraded for their inadequacies and little else.”

To take a modern analogy, if you wanted to go out today and find out what ordinary people think about the local fire department, and your sources are letters and e-mails and transcripts, you’d have a hard time, because the only time that they really make news is when something goes wrong,” she explained. “It’s a civic obligation. People haven’t written more than a sentence or two about them. There’s a paucity of information.”

But certainly, given their inextricable links with nearly all communities in the antebellum South, the slave patrols are worthy of far more research.

“Slave patrols were an important part of the entire slave system,” offers Winthrop Jordan, the William F. Winter Professor at the University of Mississippi, in the introductory text to Hadden’s book. Jordan notes that the book illuminates new aspects of slave patrols. “This is the first time that slave patrols have received undivided attention as to their origins and actual implementation.”

Luck plays a small role, too. Hadden randomly picked the archives in Raleigh, N.C., as a place to begin, and started sifting through the mountains of paper filed under ‘miscellaneous.’ She found material on the first day. “I was very fortunate,” Hadden admitted. “I could very easily have gone to another archive, dug for a week, found nothing, and called the whole thing off.”

She also stumbled upon a surprising bit of living history. Armed with a laptop and digging through archives, she looked up to find a research breakthrough in the form of an elderly gentleman who walked up and asked her what she was working on. She told him.

“So this man said, ‘My mama used to sing about those paddyrollers,’ and he starts singing this song about paddyrollers right there in the archives,” Hadden recalls. “I had him sing as many verses as he could remember.”

Hadden eventually discovered five versions of the song, including one by the popular ’20s string band Gid Tanner and His Skillet Lickers, each bearing a horribly non-PC title that this magazine is forbidden to print.

Hadden’s interest in things Southern comes naturally. She was born in Charlotte and lived in Chapel Hill and Wilmington before heading off to college at the University of North Carolina.

It was at UNC that Hadden decided to make a career out of legal history, so after earning her undergraduate degree, she headed to Harvard, where she earned her law degree (1989) and history Ph.D. (1993). She came to Florida State University in 1995, after teaching at the University of Toledo from 1993-95. Throughout that time, Hadden continued to research, re-write and re-think her doctoral thesis on slave patrols.

“The book grows out of the dissertation, though it’s heavily revised from where the paper started out,” Hadden said. “There were new documents and new books came out by other historians that made me re-think it. The argument became more sophisticated. I wouldn’t say it went a completely new direction but it gained by having me think about it longer.”

Colonists in Jamestown, Virginia, first purchased African slaves from Dutch traders in 1619, just a dozen years after the colony’s founding. As the number of slaves grew, so did the white community’s need to police them. Borrowing liberally from Barbadian slave laws, colonists adopted slave patrols as a formal institution by the middle of the 18th century. These were among the first police forces in the colonies.

Perhaps due to the lack of scholarship on the subject, the average slave patroller has largely been a caricature. When mentioned at all, slave patrollers are drawn as poor, slaveless, sadistic whites of very low social rank. In fact, the dominant image is of Marks and Loker, the supremely evil slave-catchers of Uncle Tom’s Cabin.

But, as Hadden’s research reveals, “Slave patrols between 1704 and 1721 frequently included men of superior social status, not just poor slaveless whites.” And in a two-county study in Virginia, Hadden finds that “‘Poor whites’ does not describe the status of 18th-century slave patrollers …Typically, these men headed their own households. …Half or more of all patrollers owned slaves, usually one to five slaves.”

It details like this that makes Slave Patrols a key work in the field, said legal historian Peter Hoffer, research professor at the University of Georgia: “There are other books on the paddyrollers’—and they are mentioned in just about every book on antebellum slavery—but the accounts are anecdotal, rarely include the pre-1800 South, and have nowhere near the detail and balance of Hadden’s book. Indeed, in the former works, the patrols are always viewed as the evil arm of a vicious police state. But they are important because they show how negligent that police state was, how much agency the slaves had, and how negotiation rather than mere oppression was the rule.”