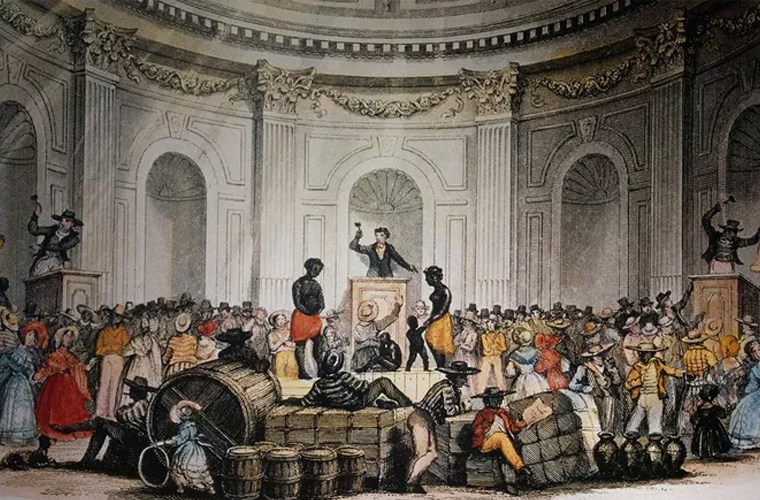 The Bible contains quite a number of broad, vague, and even contradictory statements, so whenever the Bible is used to justify an action, it must be placed in context. One such issue is the biblical position on slavery. Race relations, especially between whites and blacks, have long been a serious problem in the United States. Some Christians’ interpretation of the Bible shares some of the blame.

Old Testament View on Slavery
God is depicted as both approving of and regulating slavery, ensuring that the traffic and ownership of fellow human beings proceed in an acceptable manner.

Passages referencing and condoning slavery are common in the Old Testament. In one place, we read:

When a slave owner strikes a male or female slave with a rod and the slave dies immediately, the owner shall be punished. But if the slave survives a day or two, there is no punishment; for the slave is the owner’s property. (Exodus 21:20-21)

So, the immediate killing of a slave is punishable, but a man may so grievously injure a slave that they die a few days later from their wounds without facing any punishment or retribution. All societies in the Middle East at this time condoned some form of slavery, so it shouldn’t be surprising to find approval for it in the Bible. As a human law, punishment for the slave owner would be commendable—there was nothing quite so advanced anywhere in the Middle East. But as the will of a  loving God, it appears less than admirable.

The King James Version of the Bible presents the verse in an altered form, replacing “slave” with “servant”—seemingly misleading Christians as to the intentions and desires of their God. In fact, though, the “slaves” of that time were mostly bondservants, and the Bible explicitly condemns the type of slave trade the flourished in the American South.

“Anyone who kidnaps someone is to be put to death, whether the victim has been sold or is still in the kidnapper’s possession” (Exodus 21:16).

New Testament Views on Slavery
The New Testament also gave slave-supporting Christians fuel for their argument. Jesus never expressed disapproval of the enslaving of human beings, and many statements attributed to him suggest a tacit acceptance or even approval of that inhuman institution. Throughout the Gospels, we read passages like:

A disciple is not above the teacher, nor a slave above the master (Matthew 10:24) Who then is the faithful and wise slave, whom his master has put in charge of his household, to give the other slaves their allowance of food at the proper time? Blessed is that slave whom his master will find at work when he arrives. (Matthew 24:45-46)

Although Jesus used slavery to illustrate larger points, the question remains why he would directly acknowledge the existence of slavery without saying anything negative about it.

The letters attributed to Paul also seem to suggest the existence of slavery was not only acceptable but that slaves themselves should not presume to take the idea of freedom and equality preached by Jesus too far by attempting to escape their forced servitude.

Let all who are under the yoke of slavery regard their masters as worthy of all honor, so that the name of God and the teaching may not be blasphemed. Those who have believing masters must not be disrespectful to them on the ground that they are members of the church; rather they must serve them all the more since those who benefit by their service are believers and beloved. Teach and urge these duties. (1 Timothy 6:1-5)

Slaves, obey your earthly masters with fear and trembling, in singleness of heart, as you obey Christ; not only while being watched, and in order to please them, but as slaves of Christ, doing the will of God from the heart. (Ephesians 6:5-6)

Tell slaves to be submissive to their masters and to give satisfaction in every respect; they are not to talk back, not to pilfer, but to show complete and perfect fidelity, so that in everything they may be an ornament to the doctrine of God our Savior. (Titus 2:9-10)

It’s not difficult to see how slave-owning Christians in the South might conclude that the author(s) did not disapprove of the institution of slavery and probably regarded it as an appropriate part of society. And if those Christians believed these biblical passages divinely inspired, they would, by extension, conclude that God’s attitude toward slavery was not particularly negative. Because Christians were not prohibited from owning slaves, there was no conflict between being a Christian and being an owner of other human beings.

Early Christian History
There was almost universal approval of slavery among early Christian church leaders. Christians vigorously defended slavery (along with other forms of extreme social stratification) as instituted by God and as being an integral part of the natural order of men.

The slave should be resigned to his lot, in obeying his master he is obeying God… (St. John Chrysostom)

…slavery is now penal in character and planned by that law which commands the preservation of the natural order and forbids disturbance. (St. Augustine)

These attitudes continued throughout European history, even as the institution of slavery evolved and slaves became serfs—little better than slaves and living in a deplorable situation that the church declared as being divinely ordered.

Not even after serfdom disappeared and full-fledged slavery once again reared its ugly head was it condemned by Christian leaders. Edmund Gibson, Anglican bishop in London, made it clear during the 18th century that Christianity freed people from the slavery of sin, not from earthly and physical slavery:

The Freedom which Christianity gives, is a Freedom from the Bondage of Sin and Satan, and from the Dominion of Men’s Lusts and Passions and inordinate Desires; but as to their outward Condition, whatever that was before, whether bond or free, their being baptized, and becoming Christians, makes no manner of Change in it.

American Slavery
The first ship bearing slaves for America landed in 1619, beginning over two centuries of human bondage on the American continent, the bondage that would eventually be called the “peculiar institution.” This institution received theological support from various religious leaders, both in the pulpit and in the classroom.

For example, through the late 1700s, the Rev. William Graham was rector and principal instructor at the Liberty Hall Academy, now Washington and Lee University in Lexington, Virginia. Every year, he lectured the senior graduating class on the value of slavery and used the Bible in his defense of it. For Graham and many like him, Christianity was not a tool for changing politics or social policy, but instead to bring the message of salvation to everyone, regardless of their race or status of freedom. In this, they were certainly supported by biblical text.

As Kenneth Stamp wrote in The Peculiar Institution, Christianity became a way to add value to slaves in America:

…when southern clergy became ardent defenders of slavery, the master class could look upon organized religion as an ally …the gospel, instead of becoming a mean of creating trouble and strive, was really the best instrument to preserve peace and good conduct among the negroes.

Ironically, enforced illiteracy prevented slaves from reading the Bible themselves. A similar situation existed in Europe during the Middle Ages, as illiterate peasants and serfs were prevented from reading the Bible in their language—a situation that was instrumental in the Protestant Reformation. Protestants did much the same thing to African slaves, using the authority of their Bible and the dogma of their religion to repress a group of people without allowing them to read the basis of that authority on their own.

Division and Conflict
As Northerners decried slavery and called for its abolition, Southern political and religious leaders found an easy ally for their pro-slavery cause in the Bible and Christian history. In 1856, the Rev. Thomas Stringfellow, a Baptist minister from Culpepper County, Virginia, put the pro-slavery Christian message succinctly in his “A Scriptural View of Slavery:”

…Jesus Christ recognized this institution as one that was lawful among men, and regulated its relative duties… I affirm then, first (and no man denies) that Jesus Christ has not abolished slavery by a prohibitory command; and second, I affirm, he has introduced no new moral principle which can work its destruction…

Christians in the North disagreed. Some abolitionist arguments were based on the premise that the nature of Hebrew slavery differed in significant ways from the nature of slavery in the American South. Although this premise was meant to suggest that the American form of slavery did not enjoy biblical support, it nevertheless tacitly conceded that the institution of slavery did, in principle, have divine sanction and approval so long as it was conducted in an appropriate manner. In the end, the North won on the question of slavery.

The Southern Baptist Convention was formed to preserve the Christian basis for slavery before the start of the Civil War, yet its leaders did not apologize until June 1995.

Repression and the Bible
The later repression and discrimination against the freed black slaves received as much biblical and Christian support as the earlier institution of slavery itself. This discrimination and the enslavement of blacks only was made on the basis of what has become known as the “sin of Ham” or “the curse of Canaan.” Some said blacks were inferior because they bore the “mark of Cain.”

In Genesis, chapter nine, Noah’s son Ham comes upon him sleeping off a drinking binge and sees his father naked. Instead of covering him, he runs and tells his brothers. Shem and Japheth, the good brothers, return and cover their father. In retaliation for Ham’s sinful act of seeing his father nude, Noah puts a curse on his grandson (Ham’s son) Canaan:

Cursed be Canaan; lowest of slaves shall he be to his brothers (Genesis 9:25)

Over time, this curse came to be interpreted that Ham was literally “burnt,” and that all his descendants had black skin, marking them as slaves with a convenient color-coded label for subservience. Modern biblical scholars note that the ancient Hebrew word “ham” does not translate as “burnt” or “black.” Further complicating matters is the position of some Afrocentrists that Ham was indeed black, as were many other characters in the Bible.

Just as Christians in the past used the Bible to support slavery and racism, Christians continued to defend their views using biblical passages. As recently as the 1950s and ’60’s, Christians vehemently opposed desegregation or “race-mixing” for religious reasons.

White Protestant Superiority
A corollary to the inferiority of blacks has long been the superiority of white Protestants. Although whites  are not found in the Bible, that hasn’t stopped members of groups like Christian Identity from using the Bible to prove that they are the chosen people or “true Israelites.”

Christian Identity is just a new kid on the block of white Protestant supremacy—the earliest such group was the infamous Ku Klux Klan, which was founded as a Christian organization and still sees itself as defending true Christianity. Especially in the KKK’s earliest days, Klansmen openly recruited in white churches, attracting members from all strata of society, including the clergy.

Interpretation and Apologetics
The cultural and personal assumptions of the slavery supporters seem obvious now, but they may not have been obvious to slavery apologists at the time. Similarly, contemporary Christians should be aware of the cultural and personal baggage that they bring to their reading of the Bible. Rather than searching for biblical passages that support their beliefs, they would be better off defending their ideas on their own merits.