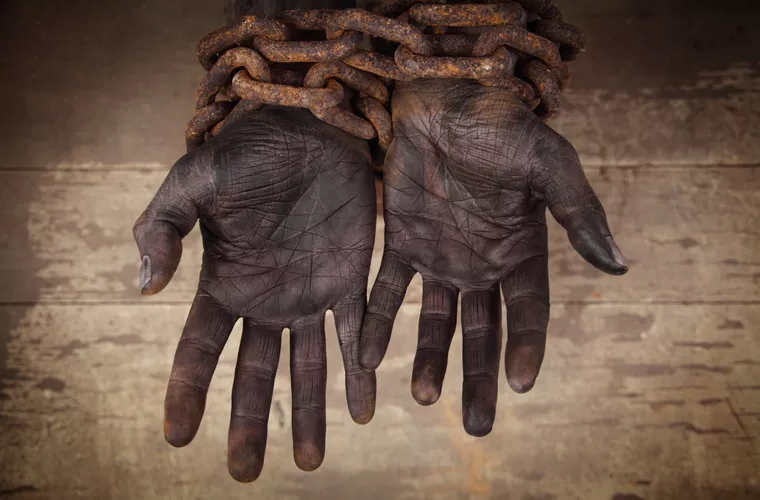 Whether slavery existed within sub-Saharan African societies before the arrival of Europeans is a hotly contested point between Afrocentric and Eurocentric academics. What is certain is that Africans were subjected to several forms of slavery over the centuries, including chattel slavery under both the Muslims with the trans-Saharan slave trade and Europeans through the trans-Atlantic slave trade.

Even after the abolition of the slave trade in Africa, Colonial powers used forced labor – such as in King Leopold’s Congo Free State (which was operated as a massive labor camp) or as libertos on the Portuguese plantations of Cape Verde or San Tome.

What forms of slavery were experienced by Africans?
It can be disputed that all of the following qualify as slavery – the United Nations deems slavery to be “the status or condition of a person over whom any or all of the powers attaching to the right of ownership are exercised” and slave as “a person in such condition or status”.

Chattel Slavery
Chattel slaves are property and can be traded as such. They have no rights, are expected to perform labor (and sexual favors) at the command of a slave master. This is the form of slavery which was carried out in the Americas as a result of the trans-Atlantic slave trade.

There are reports that chattel slavery still exists in Islamic North Africa, in such countries as Mauritania and Sudan (despite both countries being participants in the 1956 UN slavery convention). One example is that of Francis Bok, who was taken into bondage during a raid on his village in southern Sudan in 1986 at the age of seven and spent ten years as a chattel slave in the north of Sudan before escaping. The Sudanese government denies the continued existence of slavery in its country.

Debt Bondage
Debt bondage, bonded labor, or peonage, involves the use of people as collateral against debt. Labor is provided by the person who owes the debt, or a relative (typically a child). It was unusual for a bonded laborer to escape their debt since further costs would accrue during the period of bondage (food, clothing, shelter), and it was not unknown for the debt to be inherited across several generations.

In the Americas, peonage was extended to include criminal peonage, where prisoners sentenced to hard labor were ‘farmed out’ to private or governmental groups.

Africa has its own unique version of debt bondage: pawnship. Afrocentric academics claim that this was a much milder form of debt bondage compared to that experienced elsewhere since it would occur on a family or community basis where social ties existed between debtor and creditor.

Forced Labor
Otherwise known as ‘unfree’ labor. Forced labor, as the name implies, was based on the threat of violence against the laborer (or their family). Laborers contracted for a specific period would find themselves unable to escape enforced servitude. This was used to an overwhelming extent in King Leopold’s Congo Free State and on Portuguese plantations of Cape Verde and San Tome.

Serfdom
A term usually restricted to medieval Europe in which a tenant farmer was bound to a section of land and was thus under the control of a landlord. The serf achieved subsistence through the cultivation of their lord’s land and was liable to provide other services, such as working on other sections of land or joining a war-band. A serf was tied to the land, and could not leave without his lord’s permission. A serf also required permission to marry, to sell goods, or to change their occupation. Any legal redress lay with the lord.

Although this is considered a European condition, the circumstances of servitude are not unlike those experienced under several African kingdoms, such as that of the Zulu in the early nineteenth century.

From the Supplementary Convention on the Abolition of Slavery, the Slave Trade, and Institutions and Practices Similar to Slavery, as adopted by a Conference of Plenipotentiaries convened by Economic and Social Council resolution 608(XXI) of 30 April 1956 and done at Geneva on 7 September 1956.