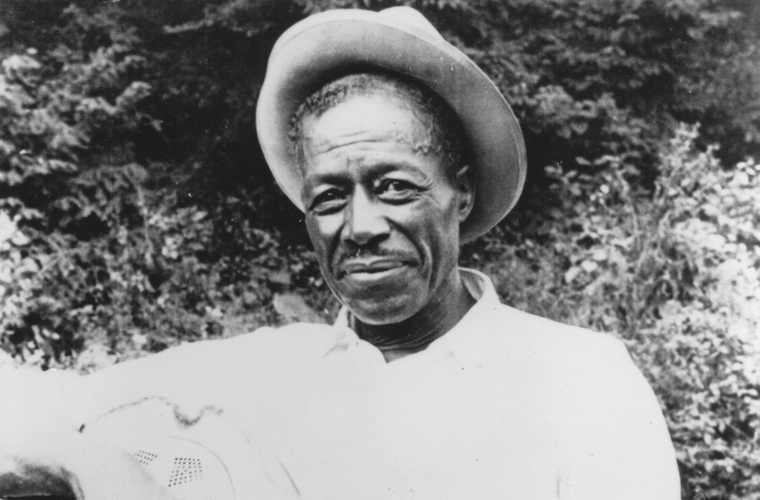 Eddie James House Jr., better known as “Son House,” was an influential blues performer born in Lyon, Mississippi to Eddie House, Sr. and Maggie House. He was the middle child of three siblings, with an older brother, Rathel House, and a younger brother, Lee Jackson House. He was married to Evie McGown and had two daughters, Beatrice and Sally.

Born into a family of musicians, Eddie had an early inclination toward the church and became a devoted gospel singer who initially shunned instruments and rejected blues music. After his family moved to Louisiana, he became a preacher at age 15. Later he returned to Mississippi and became a pastor in the Baptist Church, and later in the Colored Methodist Episcopal Church. By 1927 he acquired a passion for blues from James McCoy and Willie Wilson, whose slide guitar work inspired him to become a blues performer himself. In a short time, he became a proficient performer, with his own bottleneck guitar style and a vocal approach deeply influenced by his experience in the church. The tension between his church obligations and musical lifestyle led him to give up his pastorate.

After a two-year stint in Mississippi’s Parchman Farm prison for murder (House stated that the homicide was in self-defense), Eddie was exiled from Clarksdale, Mississippi, and found himself in the nearby small town of Lula, Mississippi. Coincidentally, Charlie Patton was living and performing there at the time with his musical partner Willie Brown, the former having been temporarily exiled from his base of Dockery Plantation. Patton and Brown, who were both Delta blues stars, observed the relatively unknown but passionate House and became close friends and performing partners with him.

When Paramount Records sought Patton to record additional sides in 1930, he decided to bring House, Brown, and pianist Louise Johnson with him to the sessions in Grafton Wisconsin. The resulting recordings are considered blues classics. After Charlie Patton’s death in 1934, House kept a lower profile while continuing to perform. He recorded for Alan Lomax in 1941 and 1942, including some songs with Willie Brown, Fiddlin’ Joe Martin, and Leroy Williams. In 1943, he moved to Rochester, NY and all but ceased playing music.

In 1964, House was relocated and contacted by blues and folk music enthusiasts, and after relearning his music style he became one of the most celebrated artists of the blues and folk revival of the 1960s and 1970s.  He performed for large audiences at major folk festivals including Newport and elsewhere throughout the U.S. and toured Europe with other rediscovered Delta blues artists including Booker “Bukka” White and Skip James. House recorded extensively during this period and provided invaluable firsthand information about prewar Delta blues including figures such as Patton and Robert Johnson, the latter having been influenced by the older House. House placed equal emphasis on blues and gospel music, and advocated the definition of blues as primary music of the heart, distinguished from “so-called” blues, which he saw as potentially dangerous.

Eddie House died on October 21, 1988, in Detroit Michigan, from complications caused by laryngeal cancer. He was 86.