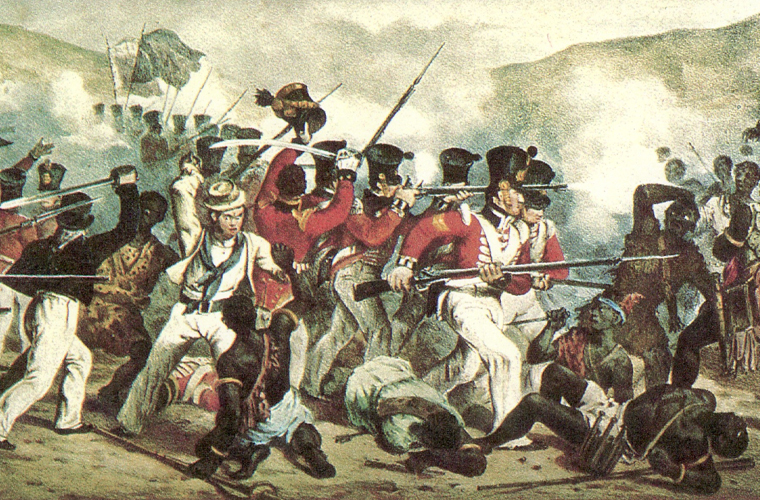 The First Anglo-Ashanti War began when the Ashanti claimed territory disputed with the Fante, a client state of Great Britain.  In 1823, Sir Charles MacCarthy, British governor of the Fante region, rejected the Ashanti claims and led a British army of 2,500 against the 10,000-man Ashanti army. On January 22, 1824, in the Battle of Nsamankow, the Ashanti defeated the British forces and killed MacCarthy. The Ashanti defeated the British and their African allies, the Fante and the Denkyirans, again in the Battle of Efutu later that year.  The British were forced to withdraw to their colony at Sierra Leone in 1828.  The war officially ended in 1831, after the Ashanti accepted the Pra River as the boundary between the British-controlled Fante coastal region and the Ashanti Empire.

The second Anglo-Ashanti War occurred between 1863 and 1864. In 1863, a large Ashanti force crossed the Pra River in search of a fugitive, Kwesi Gyana. British, African, and Indian troops responded but neither side claimed victory as illness took more casualties on both sides than the actual fighting.  The second war ended in a stalemate in 1864.

The Third Anglo-Ashanti War occurred from 1873 to 1874. British General Garnet Wolseley led 2,500 British troops and several thousand Indian and African troops against the Ashanti Empire.  For the first time, the British decided to defeat and destroy the Ashanti Empire.  Helped by better-trained soldiers, the introduction of quinine (which helped protect against disease), and the new maxim gun (machine gun) which gave the British forces a significant technological advantage over the Ashanti Army, the British defeated the Ashanti in the Battle of Amoaful on January 31, 1873.  The Ashanti capital of Kumasi was briefly occupied by the British and then burned.  The war ended in July 1874 when the Ashanti signed the Treaty of Fomena.

The fourth Anglo-Ashanti War occurred between 1894 and 1896.  Here, a decade after the Partition of Africa, the British wanted to ensure that neither French and German forces would conquer the Ashanti decided to capture and annex the entire Empire.  The war started on the pretext of failure to pay the fines of 50,000 ounces of gold levied on the Asantahene, the Ashanti emperor, by the Treaty of Fomena. Colonel Sir Francis Scott left Cape Coast along with the British and Indian Troops in December 1895 and arrived in Kumasi in January 1896. Major Robert Baden-Powell led an army of African allies who had opposed the Ashanti rule. Asantehene Agyeman Prempeh was arrested and deposed. Prempeh was forced to sign a treaty of protection and with other Asante leaders, was sent to exile in the Seychelles Islands when the war ended in 1896.

The final war, a rebellion called the War of the Golden Stool, took place from March through September 1900.  That conflict began when British representative Sr. Frederick Mitchell Hodgson, sat on the Golden Stool.  The Stool which was understood by the Ashanti to be the symbol of national unity was not a throne.  When Hodgson’s act became known, Yaa Asantewaa, the Queen Mother of the Asantahene, led the rebellion which resulted in the death of 1,000 British and Allied soldiers and 2,000 Ashanti.  Both totals were higher than the deaths from all previous wars combined. The British eventually subdued the rebellion and sent Asantewaa into exile in Seychelles.  From that point, the British controlled the entire Gold Coast until Ghana became independent in 1957.