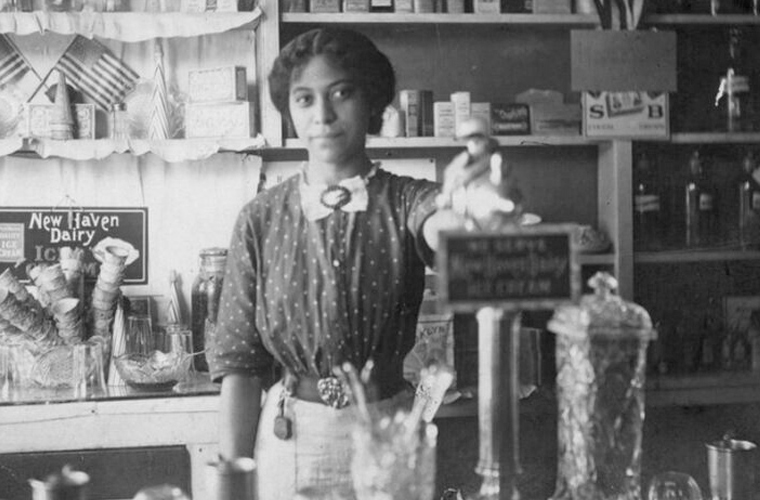 Anna Louise James was born on January 19, 1886, in Hartford. The daughter of a Virginia plantation slave who escaped to Connecticut, she grew up in Old Saybrook. Dedicating her early life to education, Anna became, in 1908, the first African American woman to graduate from the Brooklyn College of Pharmacy in New York. She operated a drugstore in Hartford until 1911, when she went to work for her brother-in-law at his pharmacy, making her the first female African American pharmacist in the state.

The pharmacy where James worked started out as a general store for the Humphrey Pratt Tavern in 1790. The store moved to its current location at the corner of Pennywise Lane in 1877, where it became Lane Pharmacy. Peter Lane, one of only two black pharmacists in early Connecticut, added a soda fountain to his establishment in 1896. When Peter got called away to fight in World War I, he left the pharmacy in the care of his sister-in-law, Anna Louise James. In 1917, Anna took over the operations and renamed her business James Pharmacy. Anna, known to local residents as “Miss James,” operated the business until 1967.

After her retirement, Anna Louise James kept residence in an apartment in the back of the pharmacy until her death in 1977. The store itself remained vacant from 1967 until 1980 when it was renovated and reopened in 1984. Although the building has changed owners numerous times over the years, the former pharmacy, now primarily an ice cream shop, retains much of the character James instilled in it. The shop still utilizes some of the original cabinetry, tables, chairs, and marble countertops, as well as a 1940s milkshake machine.

In the 1990s, AT&T featured the James Pharmacy building in one of its television commercials. The building also received recognition as part of a documentary on local resident Katharine Hepburn. In 1994, the James Pharmacy received a listing on the National Register of Historic Places. The memory of African American life in Old Saybrook during the early 1900s lives on in works by Ann Lane Petry, Anna Louise James’s niece and daughter of Peter Lane. Petry, who died in 1997, is remembered as one of the literary talents of the Harlem Renaissance.

A registered pharmacist, she worked at the James Pharmacy before marrying and moving to New York. Petry wrote The Street, a best-selling 1946 book about life in Harlem that sold over one million copies, making her the first African American female author to achieve this distinction. In addition to The Street, Petry wrote five other books including, Country Place (1947), a novel inspired by her experiences growing up in Old Saybrook, and The Drug Store Cat (1949), which she based on her memories of working at James Pharmacy.