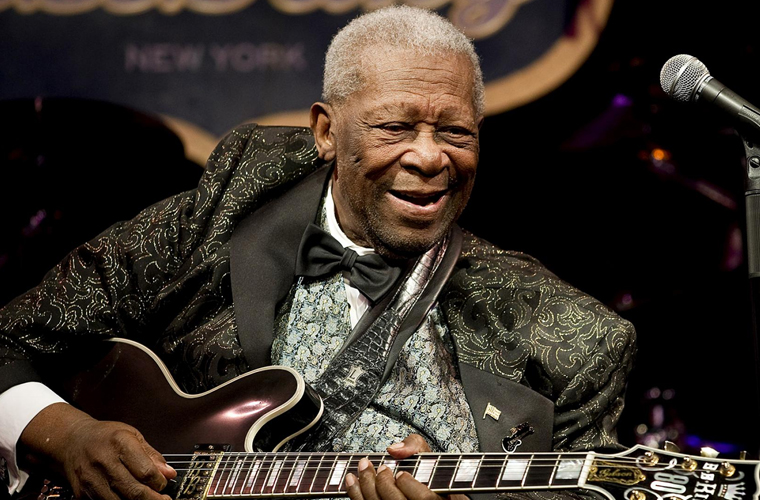 B.B. King, byname of Riley B. King, (born September 16, 1925, near Itta Bena, Mississippi, U.S.—died May 14, 2015, Las Vegas, Nevada), American guitarist and singer who was a principal figure in the development of blues and from whose style leading popular musicians drew inspiration.

King was reared in the Mississippi Delta, and gospel music in church was the earliest influence on his singing. To his own impassioned vocal calls, King played lyrical single-string guitar responses with a distinctive vibrato; his guitar style was influenced by T-Bone Walker, by delta blues players (including his cousin Bukka White), and by such jazz guitarists as Django Reinhardt and Charlie Christian. He worked for a time as a disc jockey in Memphis, Tennessee (notably at station WDIA), where he acquired the name “B.B.” (for “Blues Boy”) King. 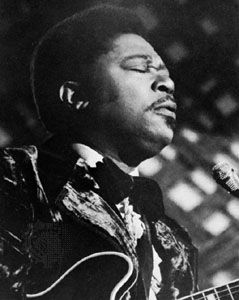 In 1951 King made a hit record of “Three O’Clock Blues,” and he thereafter began what became a lifetime of nearly continuous touring throughout the country and later the world. He often played 300 or more one-night stands a year with his 13-piece band. A long succession of hits—including “Woke Up This Morning” (1953), “Every Day I Have the Blues,” and “Sweet Sixteen”—enhanced his popularity. In 1964 in Chicago he recorded the seminal album Live at the Regal, and his 1969 recording “The Thrill Is Gone” won him the first of 15 Grammy Awards. By the late 1960s, rock guitarists were acknowledging his influence and priority; they introduced King and his guitar, Lucille, to a broader white public, who until then had heard blues chiefly in derivative versions.

King’s relentless touring strengthened his claim to the title of undisputed king of the blues, and he was a regular fixture on the Billboard charts through the mid-1980s. His strongest studio albums of this era were those that most closely tried to emulate the live experience, and the critically acclaimed Live in Cook County Jail (1971) was particularly noteworthy. He also found commercial success through a series of all-star collaborations. On Deuces Wild (1997), King enlisted such artists as Van Morrison, Bonnie Raitt, and Eric Clapton to create a fusion of blues, pop, and country that dominated the blues charts for almost two years. Clapton and King collaborated on the more straightforward blues album Riding with the King (2000), which featured a collection of standards from King’s catalog. He recaptured the pop magic of Deuces Wild with 80 (2005), a celebration of his 80th birthday that featured Sheryl Crow, John Mayer, and a standout performance by Elton John. 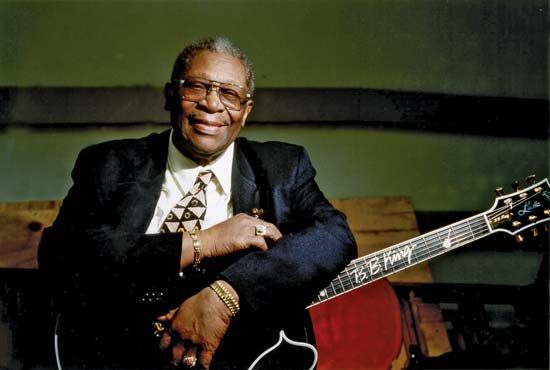 King returned to his roots with One Kind Favor (2008), a collection of songs from the 1940s and ’50s including blues classics by the likes of John Lee Hooker and Lonnie Johnson. Joining King in the simple four-part arrangements on the T-Bone Burnett-produced album were stalwart New Orleans pianist Dr. John, ace session drummer Jim Keltner, and stand-up bassist Nathan East. The album earned King his final Grammy, for best traditional blues album.

In 2008 the B.B. King Museum and Delta Interpretive Center opened in Indianola, with exhibits dedicated to King’s music, his influences, and the history of the delta region. King’s autobiography, Blues All Around Me, written with David Ritz, was published in 1996. King was the recipient of numerous awards and honors. In 1987 he earned a Grammy for lifetime achievement and was inducted into the Rock and Roll Hall of Fame. He also received the National Medal of Arts (1990) and was a Kennedy Center honoree (1995).