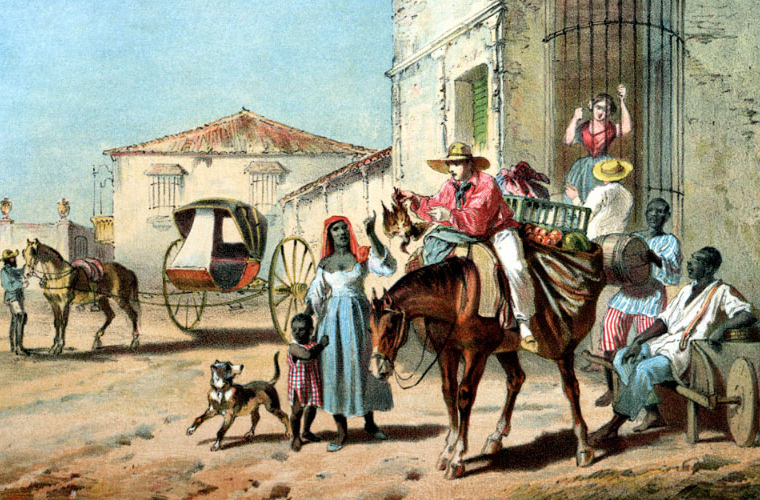 Attempts to suppress the transatlantic slave trade after British abolition in 1807 increased the number of Africans smuggled into Cuba. It was not until 1820 that the Anglo-Spanish treaty prohibited the importation of any bozales, or newly arrived Africans, into Cuba. After that time, any Africans smuggled into Cuba were supposed to be released and freed. Despite the terms of the treaty, authorities did not enforce the laws and continued to ignore the landing of African captives in Cuba.

In 1820, Tomás Acosta and his wife purchased three enslaved people, including a bozales boy. Following Cuban custom, the young man was baptized and given a Christian name, Buenaventura. The Acostas then took him to the rural region of Bejucal, populated by small farms and cattle ranches. In addition to farming, the Acostas earned money by hiring out Buenaventura to those in need of extra labor.

In 1826, Tomás Acosta purchased a female bozales from the Calabar region of West Africa. She was baptized as Maria Josefa and eventually married Buenaventura. Together, they raised four girls and one boy. By 1834, government officials in rural regions of Cuba began to enforce the 1820 ban on slave importation. Tomás Acosta, like many of his contemporaries, sought to increase his enslaved population by encouraging large enslaved families. Nonetheless, Buenaventura was a tireless and industrious worker for Acosta for more than thirty years.

Buenaventura’s loyalty did not prevent him from planning for his family’s future freedom and prosperity. He used a plot of land allocated to him to grow crops, which he sold for profit. Odd jobs also provided him an opportunity to generate and save four-hundred pesos. Money created options for Buenaventura. Before liberating himself, he purchased his wife’s freedom, who may have worked as a laundress, providing another form of income for the family. Remarkably, Buenaventura received approval from Acosta to purchase a house in Bejucal, where he rented out the property. Monthly payments allowed Buenaventura to secure a steady source of income.

Fellowship with others of African descent was important to Buenaventura. Cabildos de naciones was an organization, or brotherhood, formed by various African ethnic groups to function as a mutual-aid society in Cuba at that time. Buenaventura participated in various social-political activities, as well as the cabildos festivals, balls, and other forms of cultural expressions rooted in the African diaspora.

Buenaventura relocated his family to the house he had purchased earlier. As he aged, he declared himself by occupation, a peasant, until his death in 1872.