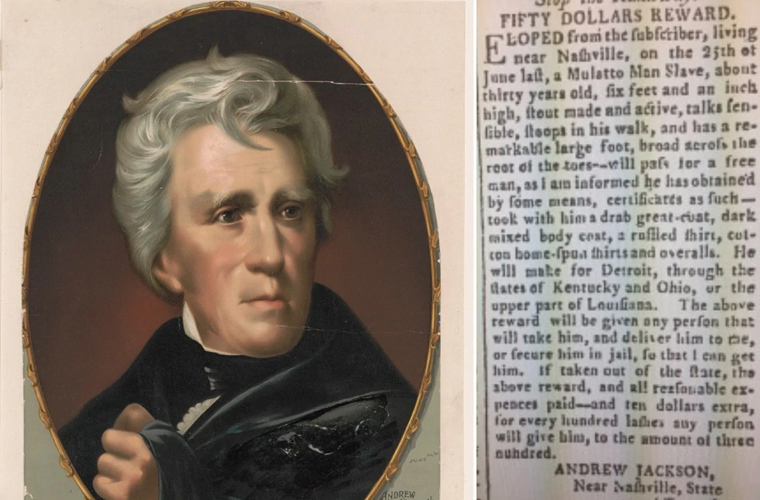 “Stop the Runaway,” Andrew Jackson urged in an ad placed in the Tennessee Gazette in October 1804. The future president gave a detailed description: A “Mulatto Man Slave, about thirty years old, six feet and an inch high, stout made and active, talks sensible, stoops in his walk, and has a remarkable large foot, broad across the root of the toes — will pass for a free man.…”

Jackson, who would become the country’s seventh commander in chief in 1829, promised anyone who captured this “Mulatto Man Slave” a reward of $50, plus “reasonable” expenses paid.

Jackson added a line that some historians find particularly cruel.

It offered “ten dollars extra, for every hundred lashes any person will give him, to the amount of three hundred.”
The ad was signed, “ANDREW JACKSON, Near Nashville, State of Tennessee.”

Jackson, whose face is on the $20 bill and to whom President Trump paid homage in March, owned about 150 enslaved people at The Hermitage, his estate near Nashville, when he died in 1845, according to records. On Monday, President Trump created a furor when he suggested in an interview with the Washington Examiner’s Salena Zito that Jackson could have prevented the Civil War.

Jackson’s slave ad is one of thousands being catalogued by the history department at Cornell University, which launched “The Freedom on the Move” project to digitize and preserve runaway slave ads and make them more accessible to the public.

“They are these little windows,” Baptist said. “I call them the tweets of the master class. The purpose is to alert the surveillance system that was the entire body of white people in the South to help this individual recover this human property.”

The ads often describe in detail the runaways: their skills, missing teeth, height, weight. They give insight into how enslaved people lived and carried themselves. The ads also provide a sense of resistance and defiance, along with harsh punishments. They describe recent beatings, scars and fingers cut off. In an ad dated June 5, 1788, that ran in the Virginia Herald and Fredericksburg Advertiser, a woman named Patty, who was about 18 years old and 5 feet tall, is described this way: “Her back appears to have been used to the whip.”

Some ads included languages spoken beyond English: Dutch, French or African languages. Others offered evidence that escaped slaves were literate and able to write passes.

Teaching slaves to read and write was prohibited, especially after Nat Turner’s revolt in Southampton County, Va., in 1831, Baptist said. “There was a wave of anti-literacy laws. Slave owners knew if some men and women were literate, they could write passes to freedom.”

Some ads included the ironic clause “ran away without cause.”

“Ran away without cause,” Baptist said, “that means ‘I’m a good slaver owner; I didn’t treat her with unusual cruelty.’ It’s hard not to make connections with the history of race relations in the United States. The whites need to define themselves as the virtuous ones.”

The skin colors ranged from light to copper colored to “perfectly black.” An ad seeking Thomas, who was about 30 years old when he ran away, described him as “5 feet five inches high, a light bacon color, stoutly made, full face, bushy hair, has a very slight stoppage in his speech, and has been badly whipped.”

Sometimes the ads gave hints of their hopes and aspirations — that they may have been headed for cities or nearby plantations where they had a mother or a father or a wife or husband or child.

A newspaper ad that appeared in July 1826, tells the story of Mary, who escaped with her baby on her back. By the time the ad appeared, four months had passed and the reward for her return was $20.

“RANAWAY, about four months ago; the negra woman named MARY, aged about 26 to 36 years; ordinary size; having lost almost all her front teeth; her under lip is thick and hangs down,” the ad said. Mary spoke French and English with “the same facility.”

In a few lines, the reader learns this about Mary: She had a baby, a small child 6 months old, “which she commonly carries with her.”

Most likely Mary was looking for her husband. “Said negra woman is very intimate with a negro named William, belonging to Mde Gaudin; and both of them have had for a long time relations with the negro fisherman at the Bayou.”
The ad was signed E. FORSTALL.

Seven years before penning the Declaration of Independence, Thomas Jefferson placed an ad in the Virginia Gazette on Sept. 14, 1769, seeking “a Mulatto slave called Sandy.” Sandy, who was about 35 years old, was described by the future president as “inclining to corpulence.” His complexion was “light.” He was a shoemaker by trade and left-handed. He was also skilled at carpentry and “is something of a horse jockey.” The ad explained that Sandy was “greatly addicted to drink, and when drunk is insolent and disorderly, in his conversation he swears much, and in his behavior is artful and knavish.” Sandy apparently escaped with a white horse. He also took his shoemaking tools “and will probably endeavor to get employment that way,” the ad warned. The reward for Sandy was listed at $40.

A man named Antoine, who used the alias William, ran away Jan. 29, 1851. Antoine was described as a “journeyman baker,” about 40 years old, 5 feet 7 or 8 inches tall, “with yellowish complexion, strong constitution, large head, big nose, thick lips, large, flat feet.” The ad alluded to the pain of Antoine’s life in captivity. He had “a large burnt scar on the chest, a piece of one ear bitten off.” He spoke both English and French. Antoine was said to have a wife in New Orleans or Lafayette. The ad promised a reward of $35 for “anyone who will bring back slave to his master.”