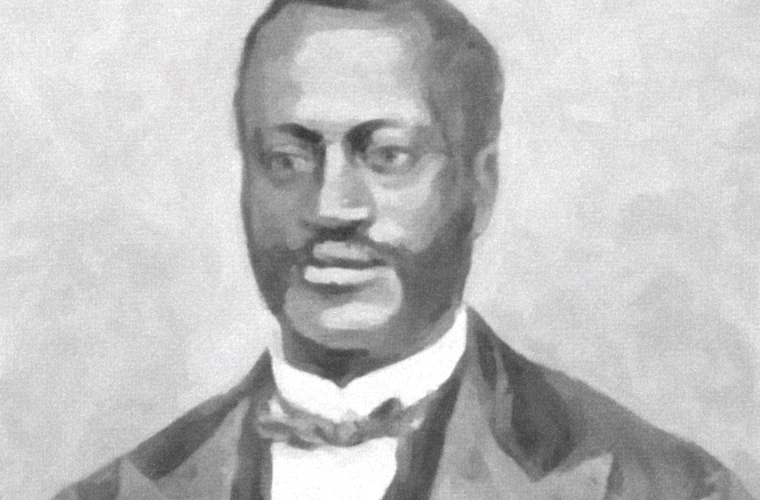 Jonathan Jasper Wright, the first African American to serve on a state Supreme Court, was born in Luzerne County, Pennsylvania and grew up in nearby Susquehanna County in the northeastern corner of the state.  In 1858, Wright traveled to Ithaca, New York where he enrolled in the Lancasterian Academy, a school where older students helped teach younger ones.  He graduated in 1860 and for the next five years taught school and read law in Pennsylvania.

Wright’s first known political activity came in October 1864 when he was a delegate to the National Convention of Colored Men meeting in Syracuse.  The convention, chaired by Frederick Douglass, passed resolutions calling for a nationwide ban on slavery, racial equality under the law and universal suffrage for adult males.  When Wright applied for admission to the Pennsylvania bar, however, he was refused because of his race.

In 1865 the American Missionary Association sent Wright to Beaufort, South Carolina to organize schools for the freedpeople.  Wright taught and gave legal advice to the ex-slaves.  In 1866 he returned to Pennsylvania and was now, with the backing of a new Federal civil rights law, accepted into the bar as the state’s first African American attorney.  Wright returned to Beaufort in January 1867 and worked as a legal advisor for the Freedman’s Bureau.  He soon became active in Republican politics and was chosen as a delegate to the South Carolina Constitutional Convention that met in Charleston in January 1868.  Later that year he was elected to the South Carolina state senate representing Beaufort.  In 1870 the Republican-dominated legislature in Columbia named him a justice of the state supreme court even though he was 30 and had little courtroom experience.  He joined two white Democrats on the bench.

By 1876 white conservatives, using fraud, intimidation, and violence, managed to gain control over South Carolina’s government.  However, it was Wright’s concurrence in a February 1877 decision confirming the authority of a Democratic claimant to the governor’s chair, Wade Hampton, which ended Republican rule, reconstruction in South Carolina and Wright’s tenure as a state Supreme Court Justice.  When the new Democrat-controlled legislature attempted to impeach Wright for corruption and malfeasance he at first denied the charges and vowed to defend his name and record.  By August 1877, however, realizing he would not win, Wright submitted his resignation.

Wright moved to Charleston where he practiced law, then to Orangeburg where he established the law department at Claflin College.  Jonathan Wright died of tuberculosis in Orangeburg in 1885. He was 45 at the time of his death.