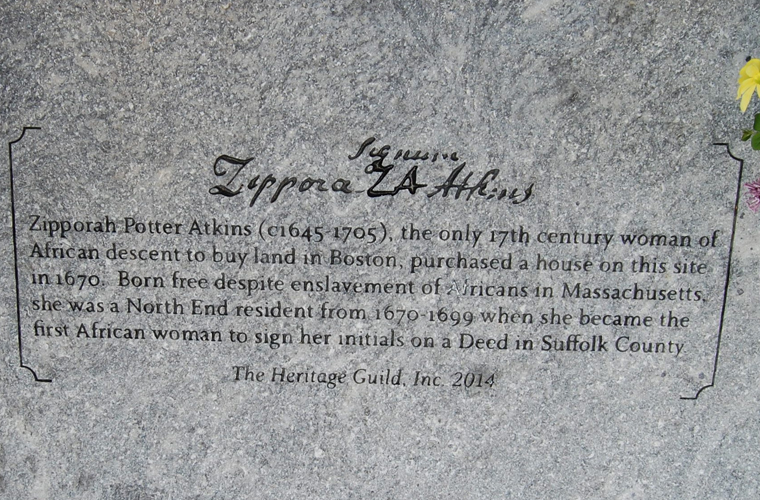 Zipporah Potter was born to Richard and Grace, slaves of Captain Robert Keayne, in the Massachusetts Bay Colony in the mid-1600s. Children born to slaves in Boston at that time were considered free upon birth, explaining Zipporah’s status as a free African American in Colonial Boston. Taking the surname of Atkins upon marriage, Zipporah is reported to have had six surnames in total. Her marriage was reportedly officiated by the prominent Puritan minister Cotton Mather. After her death, Atkins was laid to rest in Copp’s Hill Burying Ground at an unknown location.

According to historical records, Zipporah was able to purchase her property through an inheritance she received from her father. Her property was situated on the edge of Boston’s North End, near a mill pond that flowed into Boston Harbor. She owned her property while a single woman, managing to maintain control of her land through the course of her marriage. As she owned her property between the years 1670 and 1699, Zipporah was the first recorded African American woman to own land in Massachusetts.

Dr. Vivian Johnson, a retired professor of education at Boston University, discovered documentation of Zipporah’s property records around 2009. Following years of research on the part of Dr. Johnson, then-Governor Deval Patrick unveiled a memorial to Zipporah Potter Atkins on the Rose Fitzgerald Kennedy Greenway. Dr. Johnson held a talk titled “Free, Black, and Female: The Zipporah Potter Atkins Story of Homeownership in Colonial Boston” at the Museum of African American History in Boston in May 2014.