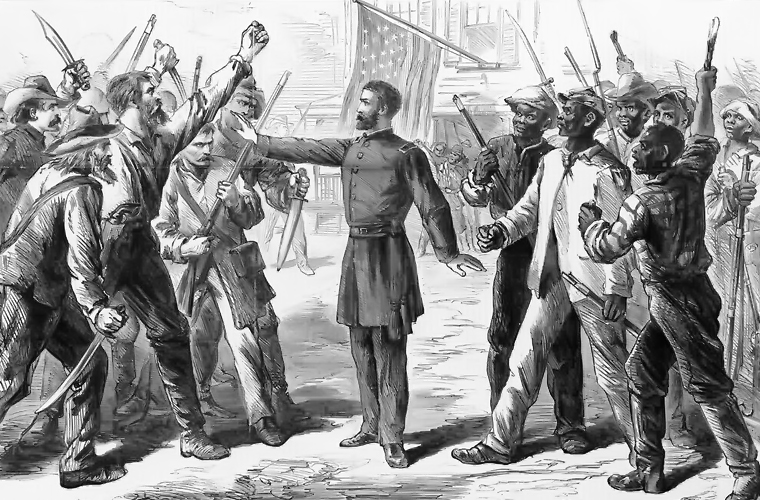 Freedmen’s Bureau, (1865–72), during the Reconstruction period after the American Civil War, popular name for the U.S. Bureau of Refugees, Freedmen, and Abandoned Lands, established by Congress to provide practical aid to 4,000,000 newly freed African Americans in their transition from slavery to freedom. Headed by Maj. Gen. Oliver O. Howard, the Freedmen’s Bureau might be termed the first federal welfare agency. Despite handicaps of inadequate funds and poorly trained personnel, the bureau built hospitals for and gave direct medical assistance to, more than 1,000,000 freedmen. More than 21,000,000 rations were distributed to impoverished blacks as well as whites.

Its greatest accomplishments were in education: more than 1,000 black schools were built and over $400,000 spent to establish teacher-training institutions. Among the historically black colleges and universities that received aid from the bureau were Atlanta University (1865; now Clark Atlanta University) and Fisk University (1866; originally the Fisk School), named for Gen. Clinton B. Fisk of the Tennessee Freedmen’s Bureau, who gave the school its original facilities in a former Union army barracks. Howard University, founded in 1867 through an act by the U.S. Congress, was named for Maj. Gen. Howard.

Less success was achieved in civil rights, for the bureau’s own courts were poorly organized and short-lived, and only the barest forms of due process of law for freedmen could be sustained in the civil courts. Its most notable failure concerned the land itself. Thwarted by Pres. Andrew Johnson’s restoration of abandoned lands to pardoned Southerners and by the adamant refusal of Congress to consider any form of land redistribution, the bureau was forced to oversee sharecropping arrangements that inevitably became oppressive. Congress, preoccupied with other national interests and responding to the continued hostility of white Southerners, terminated the bureau in July 1872.