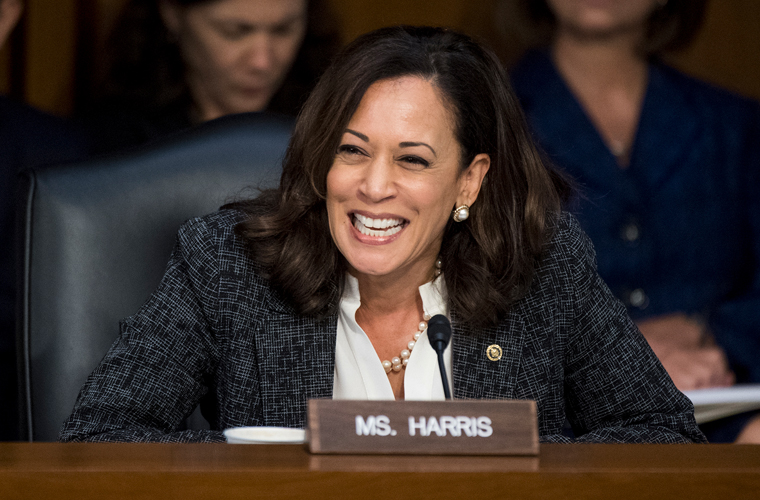 Kamala Harris, in full Kamala Devi Harris, (born October 20, 1964, Oakland, California, U.S.), American politician who was elected to the U.S. Senate as a Democrat in 2016 and began her first term representing California in that body the following year. She was the first Indian American to serve as a U.S. senator as well as just the second African American woman. Harris previously was the state’s attorney general (2011–17).

Her father, who was a Jamaican, taught at Stanford University, and her mother, the daughter of an Indian diplomat, was a cancer researcher. Her younger sister, Maya, later became a public-policy advocate. After studying political science and economics (B.A., 1986) at Howard University, Kamala earned a law degree (1989) from Hastings College.

She subsequently worked as a deputy district attorney (1990–98) in Oakland, earning a reputation for toughness as she prosecuted cases of gang violence, drug trafficking, and sexual abuse. Harris rose through the ranks, becoming district attorney in 2004. In 2010 she was narrowly elected attorney general of California—winning by a margin of less than 1 pecent—thus becoming the first female and the first African American to hold the post. After taking office the following year, she demonstrated political independence, rejecting, for example, pressure from the administration of Pres. Barack Obama for her to settle a nationwide lawsuit against mortgage lenders for unfair practices. Instead, she pressed California’s case and in 2012 won a judgment five times higher than that originally offered. Her refusal to defend Proposition 8 (2008), which banned same-sex marriage in the state, helped lead to it being overturned in 2013. Harris’s book, Smart on Crime (2009; co-written with Joan O’C. Hamilton), was considered a model for dealing with the problem of criminal recidivism.

In 2012 Harris delivered a memorable address at the Democratic Party National Convention, raising her national profile. Two years later she married an attorney, Douglas Emhoff. Widely considered a rising star within the party, she was recruited to run for the U.S. Senate seat held by Barbara Boxer, who was retiring. In early 2015 Harris declared her candidacy, and on the campaign trail, she called for immigration and criminal-justice reforms, increases to the minimum wage, and protection of women’s reproductive rights. She easily won the 2016 election.